Whether facing a bear or a virus, it’s wise to let fear inform your actions without letting it fuel panic 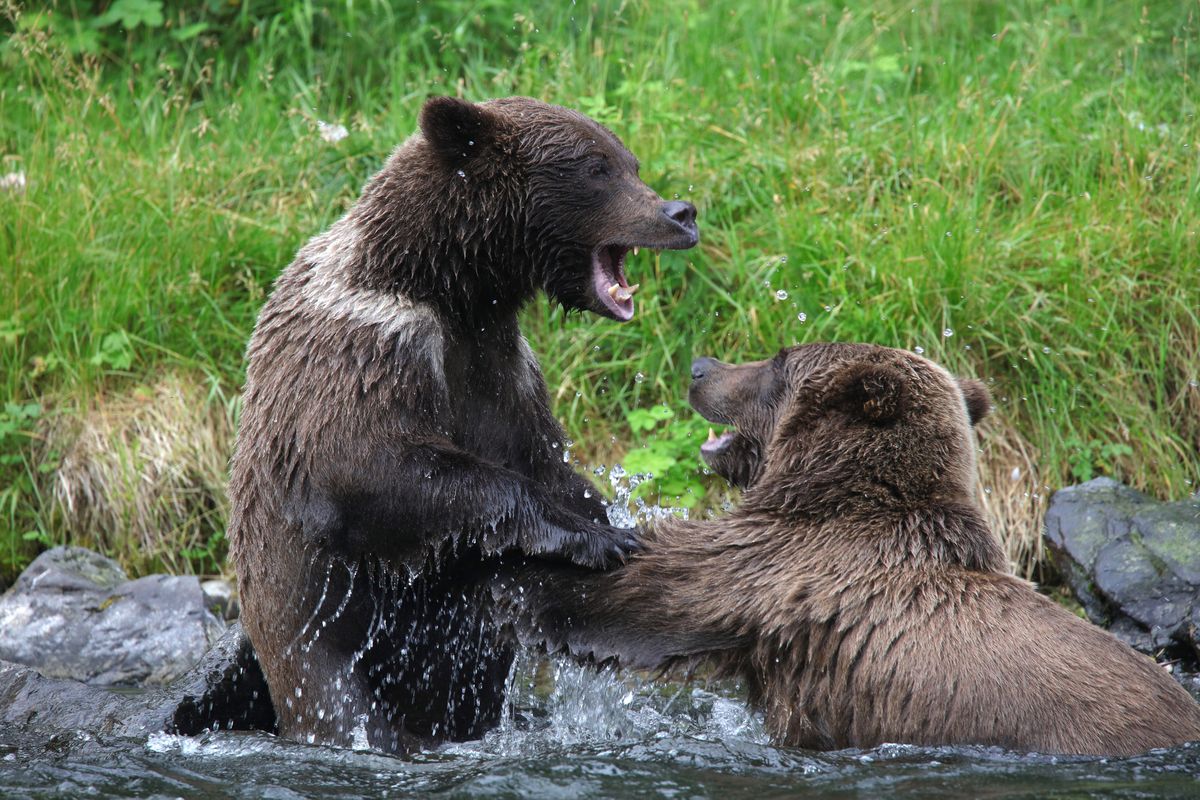 Brown bears on the Kenai Peninsula in 2017. (Photo by Steve Meyer)

Brown bears on the Kenai Peninsula in 2017. (Photo by Steve Meyer)

My grandfather took me to a carnival when I was 5 because I begged to ride the carousel. He suggested I also ride the Ferris wheel. I shook my head. No, no, no.

“I’m scared of the Ferris wheel,” I told him.

As a Marine who served as an infantryman, sometimes the wisdom of war would come back to him in a flash of command insight.

“Fear will get you killed,” he said.

I proved him wrong, however, and lived through the day without facing my fear.

In contrast, despite warnings about bear attacks and the depiction of bears snarling from the covers of books and outdoor magazines, I wasn’t scared of bears.

When my family moved to a remote cabin in the Kilbuck-Kuskokwim Mountains that had a 10-inch-thick door with deep claw marks and windows with iron bars, fear of bears was a big topic of conversation. But I was 12 and more worried about the prospect of living in civilization again.

A nearby villager described the spring mountainside where we lived as being like a farmer’s field pocked with gopher mounds, only the pockmarks were bear dens and instead of pocket gophers, grizzly bears would pop out — a sight I never saw.

As an adult, I enjoyed seeing brown bears along a fishing stream and black bears through binoculars as they ate flowers. I got to know individual animals and learned to respect them but had yet to experience fear.

One fall, three of us headed to where we had stashed a caribou head and antlers in a depression on a wide-open mountain plateau. We could see the arc of the antlers, and they appeared to be untouched.

My friend, who had shot the caribou the day before, was concerned about a grizzly bear finding the head while we had packed out the meat. My friend’s recent experience being charged by a black bear on a hunt only magnified the fear factor.

We had three rifles and one can of bear spray. We weren’t in heavy cover, and there was no sign of a bear. So far, I wasn’t worried. Before we spread out to approach the caribou head, we huddled to discuss.

“Do you want the bear spray?” my friend asked.

“No,” I said automatically.

Although my fear level was low, if a grizzly materialized I knew the intense, visceral fear of powerful teeth and claws might grip my brain like a vise. A bear had never charged me, but I wondered if my reaction might be like a rabbit in the headlights of a semi-truck barreling down the highway like destiny.

My reflexes with a gun — either a rifle or a shotgun — were fast, and I could count on them. No matter what I read or intellectually understood about the effectiveness of bear spray, I hadn’t ever held up something like a can of bug spray to a charging bear.

A more technical study comparing the two might prove that my 7mm-08 rifle is less effective than bear spray on an actual bear. But when it came to protecting my life, the can didn’t give me confidence. Would I rather trust my un-tested ability to execute a frontal brain shot on a bear that’s running at me? A bear isn’t a cape buffalo, after all. They aren’t as committed to a charge.

Steve once asked me what the rule is if a bear has taken possession of your animal. I didn’t know.

I wasn’t going to fight a bear for the caribou head, and I didn’t want to shoot one. What surprised me about our circumstance is it didn’t matter how many brochures we had read. When it got down to a real scenario of facing a fear, we had already taken the responsible actions prompted by a healthy fear and yet allowed our negative imaginations to fuel our fear into a panic. None of us chose the can of bear spray.

Fear won’t get you killed. But, too much of the stuff and the resulting overkill jumps the scale of the problem.

Fifty yards closer to our destination, I heard the safety click off one of the rifles. As someone who mostly hunts birds with a shotgun, that sound is a significant firearms offense if it happens any time before the gun is mounted. With rifles, the safety is not supposed to come off until your sights are on the target.

Fear is not a justification for saving time at the expense of safety, especially when there are no time-savings. The facts of our situation were such that not only was there no target in our visual range, but the likelihood of a bear encounter was going down, not up.

All of this is to say fear had us acting differently than we had predicted we would.

I was thinking about bears and fear again on a recent walk along the coast with Steve and Cogswell. There were more people on the trail than I have ever encountered in my life as a trail-goer. And not just people — I counted 32 dogs in a four-mile stretch.

Interestingly, and differently from the highland trails where we typically encounter few hikers, this trail had a wide variety of different responses to two specific fears — bears and COVID-19.

Many people wore masks that covered their nose and mouth, and some wore them around their necks. Some people carried sidearms or bear spray, or had bear bells on their dogs or children. A few people had it all.

I carried a .38 special. It’s just the gun I carry, but I asked Steve if it was a poor choice in terms of bear protection.

He’s a master of the droll answer. “It’s OK if the bear is on top of you, and you have the presence of mind to place the muzzle under its chin and press the trigger,” he said.

I was not likely to have that kind of lucid thinking if a bear was on top of me. But the trail had all the bustle of a train station, and there was no point in making the situation worse by worrying.

No matter how I prepare or protect myself from real or imagined dangers, some fear helps heighten awareness. But it’s also important to consider whether actions are out of panic or awareness.

Composure is not something my grandfather talked about, but it’s the peace you find in having done your best to face whatever the day brings.