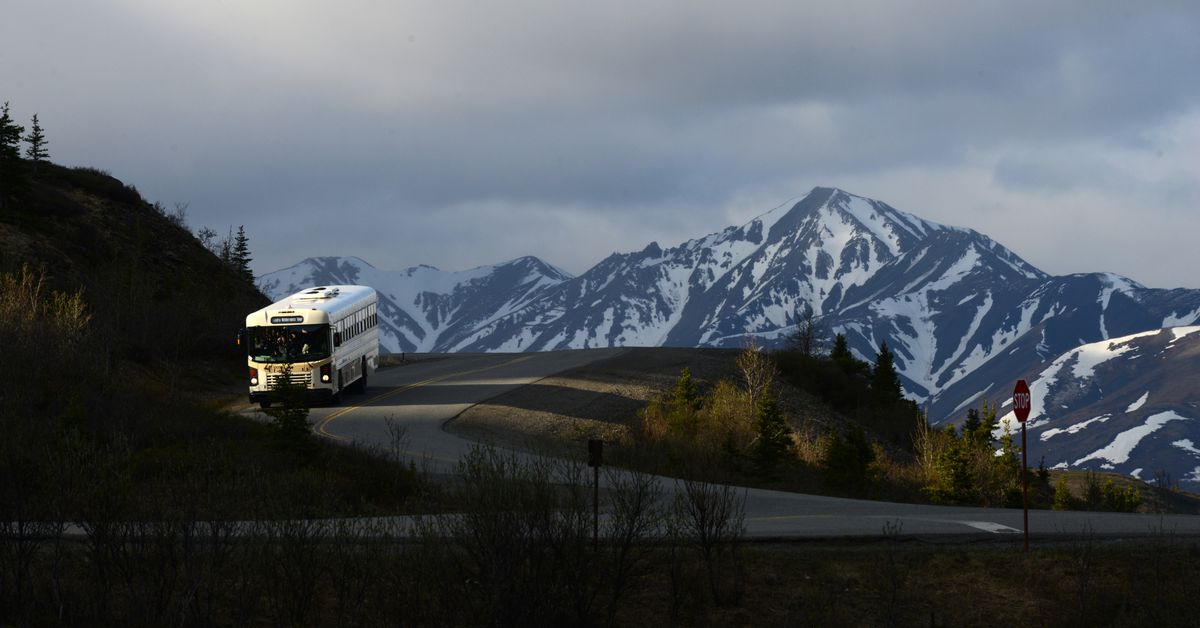 A bus drives down the park road in Denali National Park and Preserve on Wednesday, May 18, 2016. (Bob Hallinen / ADN archive)

A bus drives down the park road in Denali National Park and Preserve on Wednesday, May 18, 2016. (Bob Hallinen / ADN archive)

Denali National Park and Preserve expected about 600,000 visitors this year.

This summer was expected to bring more than 1.5 million tourists to the state, most by cruise ship. More than a third were expected to travel by bus and train to Interior Alaska and past the shops and restaurants of Glitter Gulch arrayed outside the park entry in the Nenana River canyon.

But with the park just now starting to reopen due to coronavirus precautions, wildlife is as plentiful as people. Moose calves were born near headquarters. A grizzly bear was spotted ambling around the Mountain Vista Rest Area.

The National Park Service is still figuring out how to balance visitors with ways to corral the coronavirus, which has infected more than 5.6 million people around the world and killed more than 100,000 in the United States.

Alaska’s COVID-19 numbers are among the lowest in the country: about 50 active cases out of just over 400 total among Alaskans and 10 deaths as of this week.

Denali is one of largest national parks at just over 6 million acres — about the size of the state of New Jersey — but visitors are concentrated on relatively few trails, several campgrounds, and one main road.

Travelers seeking a once-in-a-lifetime glimpse of a wild wolf may celebrate the chance to make a summer trip, and local shops, guides and restaurants are desperate for tourist traffic. But some in the park community worry the influx of out-of-state visitors and workers will bring the virus with them.

Last month, the park service closed the only road into the park because of state mandates banning nonessential travel between communities and to encourage Alaskans to stay home to curb the spread of the virus. The agency is not issuing permits to climb North America’s tallest peak, Denali, and neighboring Foraker.

Now the park service is considering a range of options to accommodate visitors while abiding by social distancing and other means of keeping COVID-19 at bay.

Among them: a new reservation system that allows visitors to pick a time on select dates to drive the park road in their own vehicle, a unique opportunity that usually occurs only with the road lottery in September. It’s also a trip not to be taken lightly, park officials say, given the winding gravel road with steep slopes that necks down to one lane in spots and offers no phone service and limited facilities.

Reservations should be available by early next week, officials say. The number of vehicles allowed daily will factor in buses and commercial permit holders.

The park is also starting a new commercial drive-in tour starting July 1 involving a guide vehicle and up to two others driven by park visitors in a caravan.

Park staffing for this summer is at about half normal levels, park service spokesman Pete Christian said in an email. “This is due in part in order to provide safe housing under the current guidelines for social distancing, and partly to address concerns about newly hired employees from across the country coming to work in remote and or isolated communities with limited health care options.”

There will also be fewer of the familiar park buses on the Denali Park Road.

The road is open until Monday for private vehicles to Teklanika Rest Stop, about 30 miles in; after that, visitors can still drive to Savage River, about 15 miles in.

The Bear and Wolf Loops of Riley Creek Campground are open for reservation. Savage River and Teklanika River Campgrounds will open June 16, along with the Riley Creek Mercantile.

Narrated tour and transit bus reservations are expected to start July 1, Christian said. Buses are expected to be half full to make room for social distancing by leaving every other seat empty and zig-zagging across the aisle.

Park officials say drastically fewer cruise ship passengers mean fewer buses on the roads and more room for the public to use it. They also say the new options still allow them to protect wildlife along the road.

But some are concerned the risks of the reopening plans are still too great.

Bill Watkins has driven a bus in the park for 30 years. Hawkins joins others in the Denali environmental community who say the park service plans come with too many potential public health and environmental downsides.

It’s also likely that COVID-19 cases could increase in Alaska with the economy reopening and out-of-state visitation on the rise despite the state so far doing “exceedingly well” keeping cases down, he wrote. “Without consistent and extensive testing with contact tracing, Denali NP management is essentially playing a game of viral, Russian Roulette with employees, residents and visitors.”

Businesses that rely on park traffic applaud the reopening.

Glitter Gulch was a ghost town this week, said John White, who owns and operates Nenana Raft Adventures. The company did one trip over the weekend.

White said he’s getting a “fair number of phone calls” from people wondering if the park is open. He said he tells them: “They’re coming up with a plan. Whatever it is will work, don’t worry ... you’ll be able to see it in an uncrowded, uncongested way."

The bigger problem, he said, is travelers reluctant to get on a plane to Alaska.