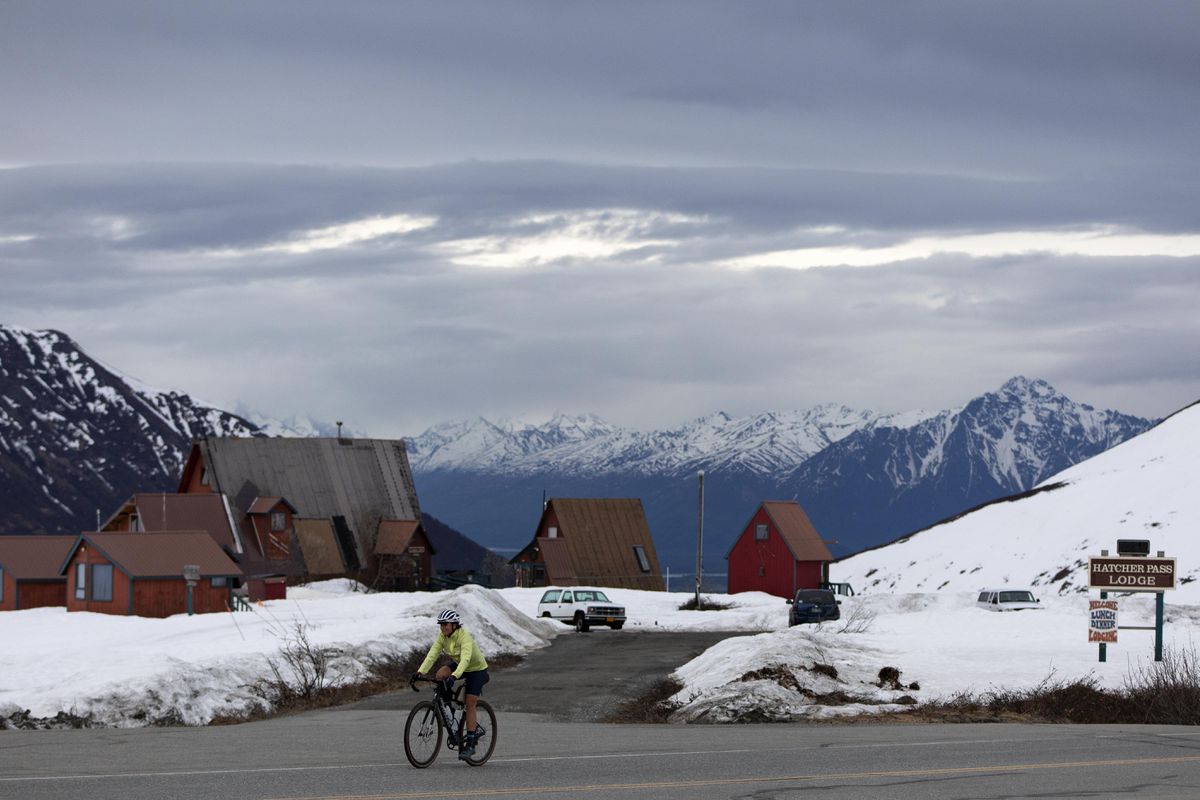 Lael Wilcox spent the Memorial Day weekend conquering the Everest challenge. She plans to spend the rest of the summer taking on the Alaska challenge.

Wilcox, a 33-year-old Anchorage woman who is one of the world’s greatest endurance bicyclists, is unexpectedly back home after the pandemic punctured her summer racing plans.

She’s making the most of it.

In a 21-hour nonstop stretch over the Memorial Day weekend, Wilcox made 13 trips up and down a 9-mile stretch of Hatcher Pass Road to complete the Everest climbing challenge, a fundraiser for COVID-19 relief organized by an Idaho cyclist. The goal for participating cyclists: ride the hill of their choice over and over until they climb 29,029 feet — the height of Mount Everest.

Wilcox wound up bagging Everest and then some — she climbed a cumulative 29,540 feet in 225 miles of riding. Each ascent started where the road crosses the Little Su River and ended at the parking lot near Hatcher Pass Lodge, where she would turn around, ride back down, and then start another lap.

Each round trip was worth 2,250 feet of vertical gain — and a white chocolate macadamia nut cookie on the descent, for fuel.

Wilcox did the challenge with Dylan Morton, a cyclist from Oklahoma who is spending the summer in Alaska. They started at 4:45 a.m. Saturday and Wilcox finished at 1:45 a.m. Sunday, about an hour earlier than Morton.

It was only dark for about two hours, Wilcox said, “and when it’s never dark, you never get tired.”

She pulled on and peeled off an assortment of outerwear every lap and was wearing rain gear when she finished.

“There was freezing rain for the final six hours,” she said. “It was 37 degrees.”

By Wednesday of last week, Wilcox was ready for a mini-adventure: an overnight bikepacking trip to the Kincaid Park beach with her 8-year-old nephew and 6-year-old niece.

By Thursday, she was headed to Denali National Park and Preserve as part of a summer-long adventure: “Lael Rides Alaska.” The project is a modified reprisal of one Wilcox did in the summer of 2017, when she bought a Milepost and set out to ride every major road in Alaska.

Once in Denali, Wilcox planned to pedal about 80 miles from the Savage River campground to Kantishna. Her parents, Dawn and Paul, went along for this part of the adventure, and her partner, Rue Kaladyte, will be along for the whole ride. Kaladyte, a photojournalist, will document the project.

The first time Wilcox cycled Alaska’s roadways, she rode more than 4,000 miles. She rode the Dalton Highway, the Taylor Highway, the Steese Highway, the Top of the World Highway, the Denali Highway, the Elliott, the Richardson, the Glenn, the Seward, the Parks, the Sterling and more. She flew to Nome and rode the three roads that lead out of there. She took a ferry to Cordova and rode there.

“I’ll be re-riding some of those roads,” Wilcox said, “and I want to try to ride some island roads in Prince of Wales and Kodiak. There’s 600 to 800 miles of road on Prince of Wales Island.”

Wilcox plans to average 165 miles a day. So does Kaladyte, who will use an e-bike some of the time so she can ride ahead to set up shots — and so she can keep pace.

Keeping pace with Wilcox over a long haul is something few in the world can do. In 2015, she set the women’s record — twice — for the Tour Divide, a 2,745-mile race from Alberta to New Mexico following the Continental Divide. In 2016, she became the first woman to win the 4,200-mile Trans Am Bike Race from Oregon to Virginia. Last year, she placed second overall in the 1,056-mile Silk Road Mountain Race in Kyrgyzstan.

No clock is running this summer, although Wilcox said she hopes to enter the Kenai 250 in June. Otherwise she wants to see Alaska again from the seat of her bike by following roads both old and new to her.

“I’m just planning on enjoying it and seeing where the weather’s good,” she said.

Wilcox, an East High graduate, has been traveling the world by bike since 2008 and competing in ultra-endurance races since about 2014. She works at The Bicycle Shop when she’s not riding or racing, and she has attracted a number of sponsors over the years.

Last week, after she completed her Everest challenge and before she headed to Denali, Wilcox took 8-year-old Joshua and 6-year-old Ada to to Kincaid Park.

“They were so excited to ride 11 miles and camp out in a tent and cook hot dogs over a fire,” she said.

The overnight trip to a spot right in town is proof that an adventure doesn’t have to last a whole summer or cover thousands of miles, Wilcox said. By riding Alaska’s roads, she wants to show that adventures are within a person’s reach.

“The main idea is encouraging more people to start adventures from home, where you pull out a map and think, ‘Where can I actually go?’ ” Wilcox said. “It doesn’t have to be far or exotic.”