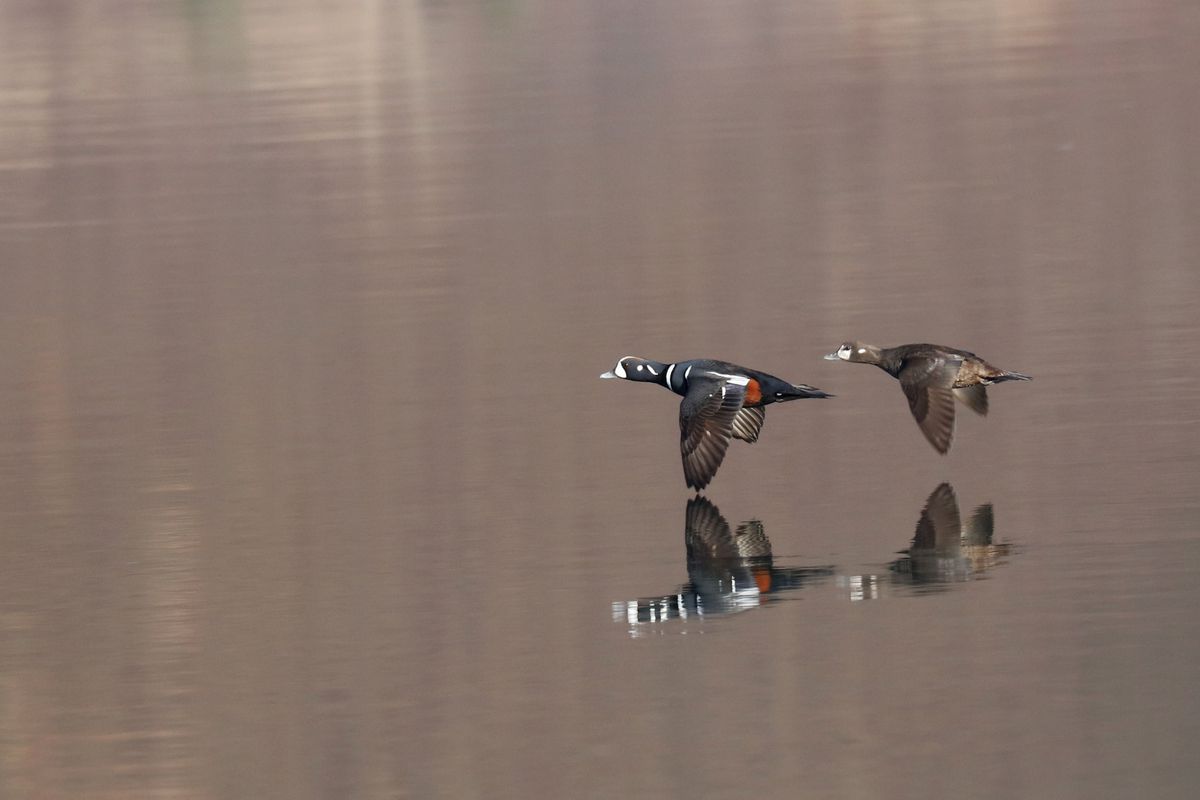 Lord and lady in synchronized flight this month on the Kenai Peninsula. (Photo by Steve Meyer)

Lord and lady in synchronized flight this month on the Kenai Peninsula. (Photo by Steve Meyer)

“Do you want to go outside with Papa?” I whispered to Colt, trying not to wake Christine. Colt answered by burrowing deeper into the sleeping bag with her.

We had a late night around the campfire, Colt wearing himself out chasing the spruce wood sparks into the clear night air that led to a crisp cold morning.

I couldn’t blame him. Were it not for a lifetime of rising at 4 a.m., a habit I cannot seem to rid myself of, I would have slept in too. The bustle of the mountain stream a stone’s throw from the tent created a symphony with a rhythm that had lulled me fast to sleep, but the infernal inner clock was having none of it.

Sliding the zipper of the tent as quietly as possible, Colt didn’t stir from his warm nest as I tiptoed toward the stream. The late-May morning air was typical after a clear night, just cold enough to beg for wool and down to ward off the chill.

The sun was struggling to vault the northeastern horizon, and the streambed and banks were cast in darkness when I found a flat slab of granite to perch upon and watch the world wake up.

There was no mission to the camping trip beyond being there and bonding with Colt — the best sort of camping. A relaxing pleasure, free of the demands of hunting camp where adrenalin for the chase trumps all and suffocates the misery beneath the drive to pursue. No pressure to gather gear, packs and guns and charge off in search of prey, never mind breakfast or the soothing embrace of the campfire relieving the morning chill.

But none of those pleasures defeat the ever-aware hunting spirit, the eyes of the hunter that never stop probing the nooks and crannies for what they might conceal.

When hunting, the hyper-vigilance of the search can have the opposite of the desired outcome. The best way for me to describe it is the first winter hunt for hares that have turned white with the loss of daylight. During a good hare year, when the cycle is peaking, you see them everywhere during the summer and fall. When the snow blankets the ground in white and it’s time to hunt them, you can’t find them. You know hares are there, and the growing intensity of the search turns to frustration. At least that is how it has been for me.

Over the years, I learned how to beat this phenomenon by forcing myself back to that place where you see everything, and then, amongst everything, you find what you look for. All of a sudden, the white hare is right there, and you say to yourself, “Oh yeah, now I remember what they look like,” and from that point, life becomes much easier.

On this early morning in May, with no agenda, my mind was free to observe and see everything. Light was starting to penetrate the bank of the stream opposite where I sat. The slabs of granite that lined the bank took shape and after a bit, a shape among the rocks seemed out of place.

It may have been as much to get relief from the cold that had left my butt numb as much as thinking the shape was anything that prompted me to retrieve binoculars for a closer look.

The short walk to the get the binoculars and return to my spot warmed my butt, and I was ready to do battle with my cold, hard perch. Settling in with my knees up to steady the binoculars, I found the shape in question and focused the binoculars.

Through the light-gathering glass my heart skipped a beat when I found, peering back at me, the face of a clown.

After many years, the search for the pot of gold at the end of a rainbow came to fruition in the form of harlequin in their nesting habitat.

Harlequin ducks are classified as sea ducks. That they often nest along small streams issuing out of mountains seems to be at odds with that classification. It is one of many things that makes these gorgeous little ducks much more interesting than the romance novels that share their name. (In fairness, I may be wrong; my only experience with the books are the garish covers that adorn bookstore shelves.)

Their name comes from the appearance of the drake. The mix of colors in their feathers ends a comparison with costumes in the theatrical arena. The Latin name of the duck, Histrionicus histrionicus, comes from the word “histrio,” or actor. Harlequin comes from the colorful costumed character in commedia dell’arte.

Throughout their range, which is primarily northern coastal waters of North America, Greenland, Iceland, and Russia, they are referred to by local color in a variety of endearing terms. These include mountain duck, glacier duck, clown duck, squeaker (for the noise they make), and lords and ladies. They are also called the “Wood Duck of the North,” perhaps for their comparable color-hued beauty.

The environment they choose along the coastline is the shear rocky areas that endure the pounding of turbulent seas. This may explain their choice of breeding grounds. The streams they nest along are also rocky and rough, but not quite as harsh as the ocean. It seems the ducklings are exposed to what they will live in, where they aren’t as vulnerable to predators and the environment.

Where they live may explain the frequency of broken bones, said to occur more in harlequins than any other waterfowl species.

They are hunted, but more as a one-time trophy than for the table. Their diet of mussels and small crabs, which they will dive up to 80 feet for, lends an awful taste to the meat that cannot be disguised, even in pepperoni.

Since that morning years ago, I’ve returned to the same place each spring, and what I choose to believe is the same pair (they can live for 20 years) is always there.

It’s enchanting to spend a few hours watching them negotiate the swift currents as they forage for small fish and aquatic insects. They climb up on the slippery rocks, and it’s as if they are posing, inviting you to capture their image.

Excited by the ducks, I returned to the tent and woke Christine, who shared my excitement, and Colt, who did not. He had a look and then went in search of butterflies to chase.

I suppose not all will share the delight these birds bring, but if you want to find them, now is the time. Once the eggs hatch, the males leave, and while the hens with ducklings are fun to watch, nothing is quite as striking to the eye as those gorgeous males in that environment.