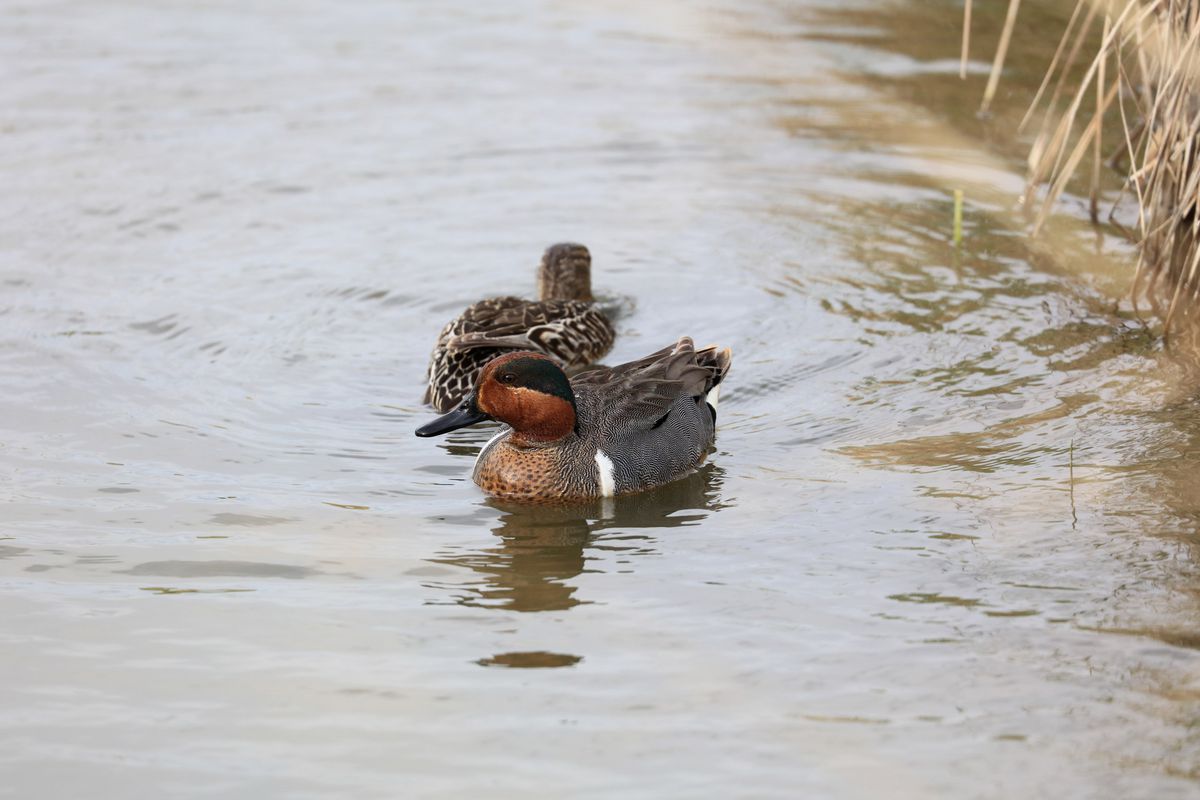 A pair of green-winged teal in Anchorage, spring of 2016. (Photo by Steve Meyer)

A pair of green-winged teal in Anchorage, spring of 2016. (Photo by Steve Meyer)

My first season sitting in a blind waiting for ducks taught me to be a better conversationalist. When you can only talk in a whisper and between the action, you don’t waste words on unimportant things.

And they do — whether you are looking for them to present a perfect shot and take aim or your gun stays at your side as you, motionless, watching them fill the pond. The way ducks land, whether they whisk in like teal or strain their necks against the wind, back-trolling to alight like hummingbirds at the feeder, is a joy to watch.

For a while, when duck hunting was new to me, I couldn’t tell the difference between seagulls and ducks at a distance.

I’d see a flock of birds on the horizon and whisper, “ducks,” and Steve would correct me, “seagulls.” At first, I thought he had extraordinary eyesight. Then, he explained that ducks fly with tiny wing beats while seagulls fly with swoops and glides.

You can identify a bird’s flight pattern and path at a greater distance than its definitive plumage, as illustrated in bird identification books. Over time, I learned to recognize the shape, size and sound of different waterfowl — the small, disorganized teal as compared to the whistle of widgeon.

In Alaska, the early fall waterfowl season is known for its “brown ducks,” which are ducks that look nothing like the colorful representations on a North American waterfowl poster because of their stage in the molt. Instead of a green-headed mallard, the male of the species looks like the mottled brown hen. The same goes for other popular puddle ducks — teal, pintail and widgeon.

If you want to see these birds in their brightly colored plumage, it’s best to find them before they nest in the spring.

“The first promise of summer, you took to the woods, not as a hunter or a fisherman, but as a naturalist,” says Robert Ruark, author of the hunting classic, “The Old Man and the Boy.”

At first reading, I took issue with the statement — I wouldn’t want to miss spring black bear season or the early run of king salmon.

A few weeks ago, I found myself wondering if I would have appreciated or understood the difference between the more brightly colored birds of spring if I had not learned so much about the birds and their habitat through hunting in the fall.

It was duck hunting that taught me to learn the shapes and habits of ducks so that, when a lifting fog recently revealed the silhouettes of pintail on the surface of a lake, I knew what they were from too far away to see.

On a single lake, Steve and I found pairs of pintail, widgeon, bluebill (lesser scaup), goldeneye and harlequin.

Unlike in the fall, the ducks did not seem too worried about us as we walked along the shore. They were busy with the magic of spring.

Likewise, I did not have my duck-hunting outfit or sensibilities. There was no duck call around my neck to greet them with an even, steady rhythm. The broken feeding call and the hail calls I’d learned to make seemed as out of place in late May as Christmas music.

What do you say to a duck, I thought, when there is no urgency of a comeback or pleading call — the often-overused calls duck hunters make to attract ducks that don’t respond.

Then I saw her, all alone on a distant pond. She was the same in the spring as in the fall. “The lonesome hen” is a name for her as much as the call she makes.

This particular call was first described to me as the sound a hen duck makes to attract a male. That’s not entirely true –- ducks are gregarious, and the raspy call of a mallard hen is just a request for company. I doubted it had anything to do with attracting a male.

After all, why would she make that sound in the fall?

Instead of a call of attraction, I figured it was more a reflection of the world, like the blues. She’s alone on the delta, a traveling singer belting a tonic for what ails her. On a spring morning, it has a lighter note and does not have the muddy fall sound. It has a bit of sparkle to it — more gospel than blues.

There have been plenty of times a lonesome hen has kept us company in the fall — neither Steve nor I have much interest in shooting a duck that makes that kind of conversation. I am not going to shoot a duck that I’ve quacked back and forth with all morning. So, I knew it was not my intent that changed how the hen mallard sounds from fall to spring.

I listened more closely to try to answer the question for myself and, at the same time, realized I was not shivering in a duck blind with my hands clenched around a thermos lid of coffee. I was sitting next to Steve on a flat rock along a lake.

The whole world was different. Without a duck call or a gun, I had no role to play. I had no story to whisper that would be interrupted if ducks landed. All I had to do was listen and enjoy the first bit of sun coming over the mountain to soak up the fog.

There was this musical sound of the hen that floated in the air. Was it a call to a drake to identify a nest location or a maternal call meant for unhatched ducklings?

No matter what I don’t know and still have to learn, I think “The Old Man and the Boy” had it right about hunters in the spring. We are not separate from the universal influences or the distinctive character of nature. I’m happy to work on being a naturalist this time of year.