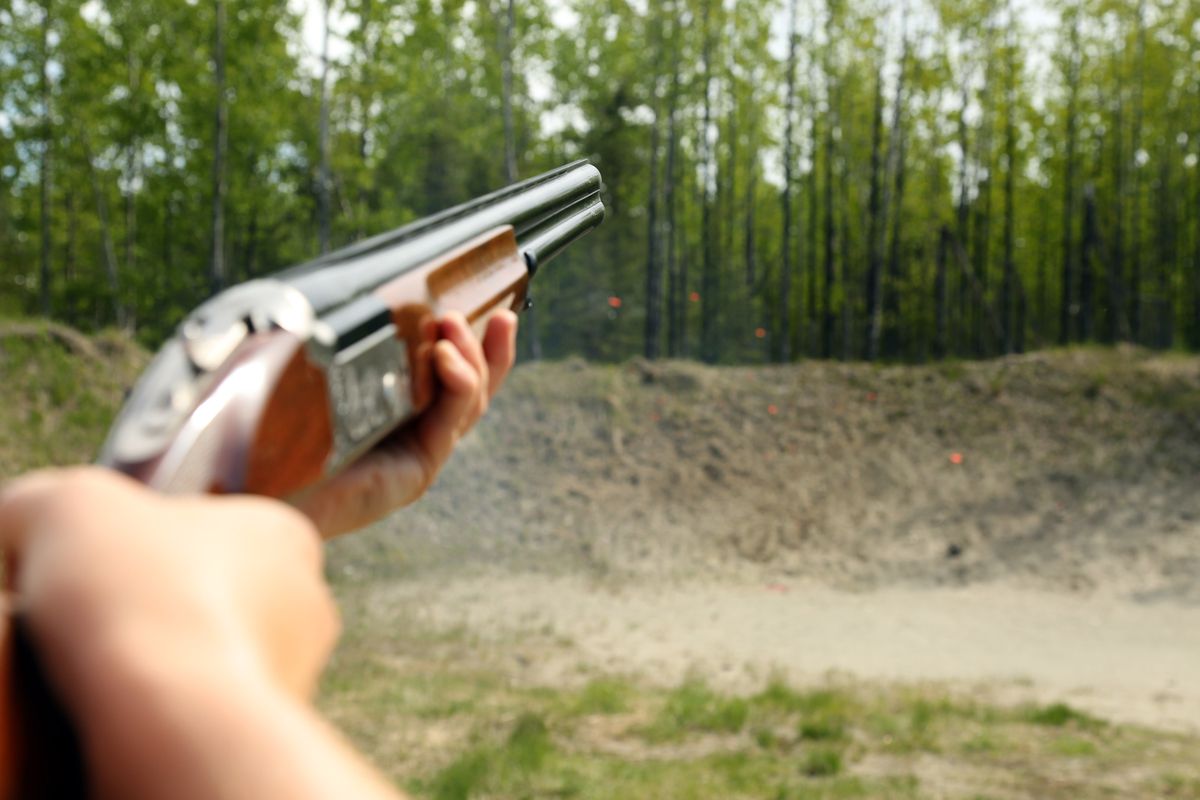 Christine Cunningham breaks a clay pigeon without benefit of the bead, that is mostly aesthetic for the wingshooter. (Photo by Steve Meyer)

Christine Cunningham breaks a clay pigeon without benefit of the bead, that is mostly aesthetic for the wingshooter. (Photo by Steve Meyer)

The two old grouse hunters were sitting on an old beech deadfall, the aroma of applewood pipe smoke drifting through the tangled grouse country. Between puffs, one told the story of being lost during the previous deer season. For two days he wandered the forest before stumbling across an old logging road that he recognized and made his way home.

“Never going in the woods without a compass again,” he uttered to his friend.

The friend chewed on his pipe for a moment, then removed it from his whisker-grizzled, low-hanging lip.

His partner gave him a questioning look.

“Yeah,” he said, “I just fire two quick shots from my double and then holler, ‘how in the hell did I miss those shots?’ Pretty soon, three grouse hunters will show up to tell me how I missed those shots, and out of the three, at least one will know the way back to the road.”

It’s a story passed from generation to generation in the shotgunning world. No one knows the precise language of the original, but the message is clear: in the wingshooting arena, be it the game fields or the clay pigeon ranges, someone has the answer you need.

They may be right or wrong, but all are genuinely well-meaning and often useful. Well, except when your buddies want to mess with you and the power of suggestion has you doing things that you know are ridiculous, but you’ll try anything to get a hit.

The story flits through my memory whenever I have a slump and can’t seem, as the saying goes, “hit my butt with both hands.” Then I’ll rummage around the gunsmithing tool drawer for the small circle vise that allows removal of the front sight bead on my shotgun. Or I’ll find the BB gun that I filed the sights off, dust it off, and get to work.

My first firearm was a .22 rifle, given to me by my dad. It fundamentally changed my life. I loved that rifle, slept with it, took it everywhere it was allowed, and I got to be a fair rifle shooter because of it.

But what I wanted more than anything was to be a wingshooter.

The first hunting trips I was allowed to go on, as an observer, were for the wildfowl available near home, pheasants, ducks and geese. I would follow along behind my dad and his lifelong hunting partner, Eddie Larson. When birds flushed ahead of them, the shotguns would come up and quick as the buttstock touched their shoulder, shots rang out, and birds dropped. I wanted with every fiber of my young body to be able to do that.

One day when I was 9, Dad told me to go get some empty Schmidt beer cans — the ones with the great outdoor scenes on them. I gathered up a couple of grocery sacks full while Dad loaded a couple of shotguns in the truck.

He had let me shoot his shotgun before, mostly at empty coffee cans set out at 20 yards or so. He told me to forget about the bead on the gun barrel and just look at the target, and when the gun came up and hit my cheek and shoulder, slap the trigger.

“The gun will shoot where you look,” he said. “You don’t aim it like a rifle.”

Well darned if he wasn’t right. After a fashion, I could hit those stationary targets with ease. When he had me gather up the beer cans, I suspected something different was coming.

We went to a field on the farm and Dad told me to find small rocks and put a few in each empty can. When I had them sufficiently prepared, he held his old M12 Winchester and told me to stand to his right and throw a can as hard as I could, out in front of him, and watch what he did.

My can-throwing ability wasn’t the best and the can was not far out when he mounted the gun, slapped the trigger and with a direct hit, sent that can sailing.

“Think you can do that?” he asked.

“Well,” I answered, "I can try, but I don’t think I can get the gun mounted that fast.” The stock on the shotgun was too long for me. I could get it mounted, just not fast.

“For now,” he told me, “you can get it to your shoulder before I throw the can, just don’t try to aim it, just watch the can as you bring it all the way up and shoot.”

I missed the first can, and the second, and the third.

“You’re trying to aim at it. You’ve got to trust that it shoots where you look,” Dad advised.

He was right — I was trying to aim with the gold bead perched on the end of the shotgun muzzle. Coming from rifle shooting, where you must line up sights and aim, it is tough to abandon that tiny little bead front sight and trust that the gun will shoot where you look, provided the shotgun fits and you have it mounted correctly.

I didn’t hit a lot of cans that day, but the ones I did were when I shot where I looked.

Learning that, and shooting well because of it most of my life, is the reason for removing the bead on my shotgun when I need to restrict my wingshooting brain and regain the trust in shooting where I look.

Using a BB gun with no sights works the same way, and it can be done without much cost or noise. This applies to shotguns that you normally shoot well and that fit. If not, that’s a different conversation.

I didn’t know about using the BB gun until some years back when I was reading Bob Brister’s book, “Shotgunning: The Art and the Science." Brister, who started his shotgunning career hunting doves, quail and waterfowl in Texas, was one of the best wingshooters in the world.

He could transition between game to the clay pigeon circles in remarkable fashion. He was a champion live pigeon shooter in the European circles, an accolade in a life’s work when those events defined the best wingshooters the world has ever produced. That was many years ago, but what he said remains as solid today as anything ever written on the subject.

It seems unlikely that any of those three grouse hunters who show up to tell you what you did wrong would recommend removing the bead from your shotgun. But if one did, he’s the one I would follow out of the woods.