On the Kenai Peninsula, the hills are alive — and a lot farther away than they look 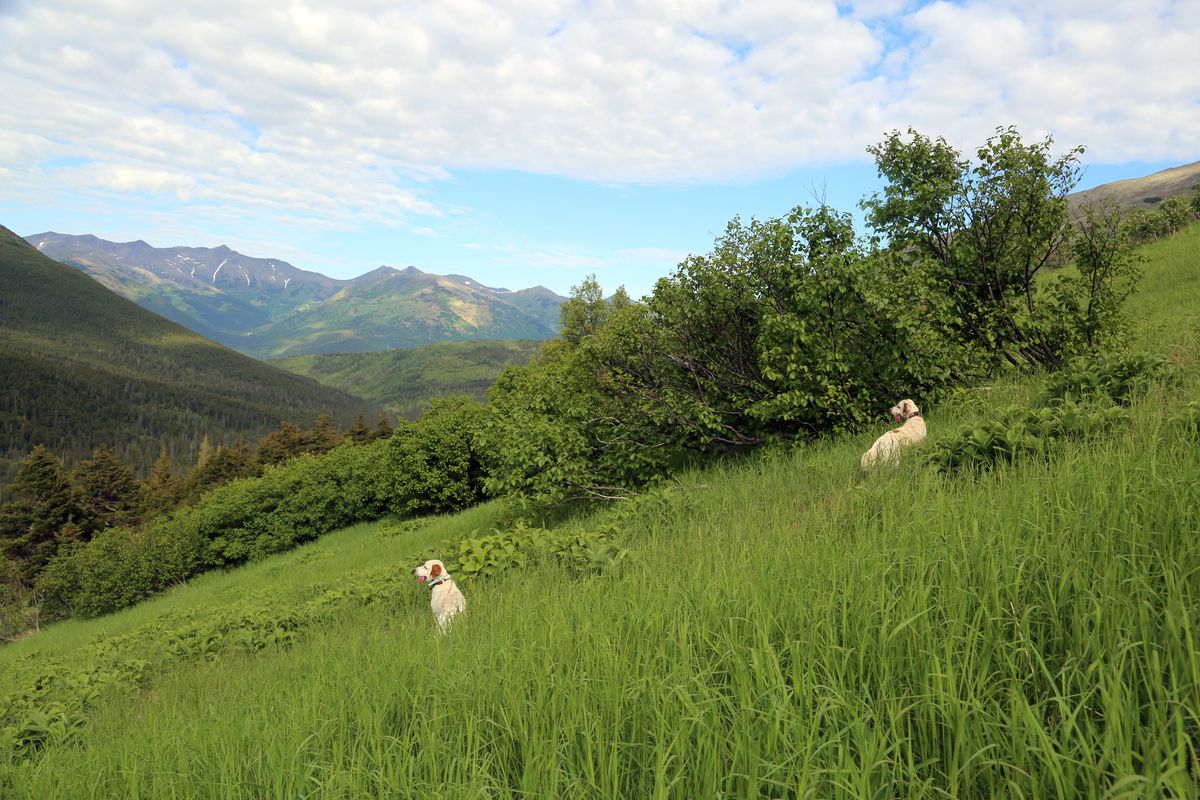 Cogswell (left) and Boss (right) enjoy the tall grass on what does not look like a mountainside (but is). (Photo by Steve Meyer)

Cogswell (left) and Boss (right) enjoy the tall grass on what does not look like a mountainside (but is). (Photo by Steve Meyer)

It is an old joke, perhaps. It goes something like this: “Let’s just run up there.” Anyone who has misjudged a mountain mile might know the rest of the story.

The apparent distance of mountains isn’t just a quandary about why they appear blue from far away. I do not claim to know the science of illusory perception, just my experience of it.

When looking up a mountain, I become stupid about gauging distance and size. Smug hunters might laugh at the unexperienced person who asks, “Is that a bear?” when looking at a black shape far up a hillside.

The mountain hunter might say something like, “If that were a bear, it would be the size of your house.”

Even though I know better, I often suspect patches of snow are goats or sheep. So what if my illusory sheep are the size of the White House? A quick look through binoculars confirms what a four-hour hike might have told me.

What I never seem to learn, year after year, is how far and long it will take to climb a particular mountain. In this regard, I’m as terrible at guessing as I was when I said “Let’s run up there” the first time.

Steve will laugh at me. “Remember when you thought we could just run up there?” Yes, I remember exactly how far I did not run.

In my mind, I was 10 minutes away from being Julie Andrews swinging my arms in the Swiss Alps. In reality, my high point was a long slide down the slope after hours of toil when I slipped on shale hiding under grass. A bloody knee was the least of my pains when I slumped midway up the mountain on the grassy spot where the bear once was, and we watched him amble into the next valley.

Hunting guides will advise hunters to condition themselves for mountain hunting. They might give a good rule of thumb — how many stairs you should be able to climb with a 40-pound pack, for instance.

I do not know what gym in the world has stairs like the ones you find in nature. Mountain stairs, while far more beautiful, are made of shifting rock and pelted in flowers, some with thorns. But that isn’t the worst of it.

This past weekend, while scouting an area new to us, Steve and I saw a promising slope. This time, Steve is the one who made the foreshadowing and later humorous remark: “It looks like there’s an easy way up.”

I saw it too. It looked like you could skirt the alders and wind your way up through the grass. Once you got to what looked like a cow pasture of green, it was a straight shot to the rocks, and you were on the ridge.

In your mind, the trip takes three seconds. A zig, a zag, and presto!

I knew it wouldn’t be as easy as it looked, but it’s a great way to get in shape.

Our jaunt started with getting through a few yards of alders. Only it wasn’t a few yards. It was 400 yards uphill.

“I think we took a wrong turn,” I said. Ahead of me, Steve was hanging from one branch while throwing a leg up over another.

We had Boss and Cogswell, two English setters, with us, and they also participated in the game of limbo. Despite his breed, Cogswell is not particularly agile, and he took a break high-centered on a bowed branch. He looked back at me, his expression one of doubt.

I enjoy going through alders. I will complain along with anyone else, but there’s something fun about ducking and climbing. I like it better than walking up an overgrown avalanche chute with each step the same upon a bed of dead, matted grass with waist-high new grass growing up through it — the destination fixed by mirage no matter how far you traverse.

“How far do you think that rock is?” Steve asked.

The rock looked like a nice spot to take a break. It was at the far edge of the vertical grass field.

I could see the tops of Boss and Cogswell’s heads as they hopped along, Boss ahead and Cogswell, usually behind.

I doubled my guess out of hope I would appear less stupid. I thought the rock was 200 yards away, and I guessed 400.

“Seven hundred,” Steve said. Great. When you look up or down, the perception of distance is as distorted as the time it will take to get there. Getting to that rock took an hour.

Some people say anthropomorphism is wrong, that you should not assign human characteristics to animals. So I won’t do that. But I can report that Cogswell is the first to turn into a pumpkin on a long hike, especially if it involves a hill.

He is the first to slow down and walk in your tracks. Sometimes he stands in your way. He will accidentally think we are heading back often.

When we took a break at the rock and gave the dogs some water, I thought we were midway. I sat down to enjoy the view. Suddenly, I felt a tap on my shoulder. It was Cogswell.

Just as I pondered how different our route looked from up high than it did from down low, I imagined Cogswell wanted to know, “Are we there yet?”

“It does look like there was an easy way up from here,” I said to Steve.

He agreed with a nod. Cogswell tapped me on the shoulder again.

We talk it over, laughing at ourselves. We’ve both got scrapes, and Boss’s head is green from bounding through the grass. The dogs are tired, and even though we aren’t too tired, we decide we should head back and try for the peak another day on a different route.

My favorite trips to the mountains are like this — scouting trips with no purpose except to learn a little more about the place and ourselves.