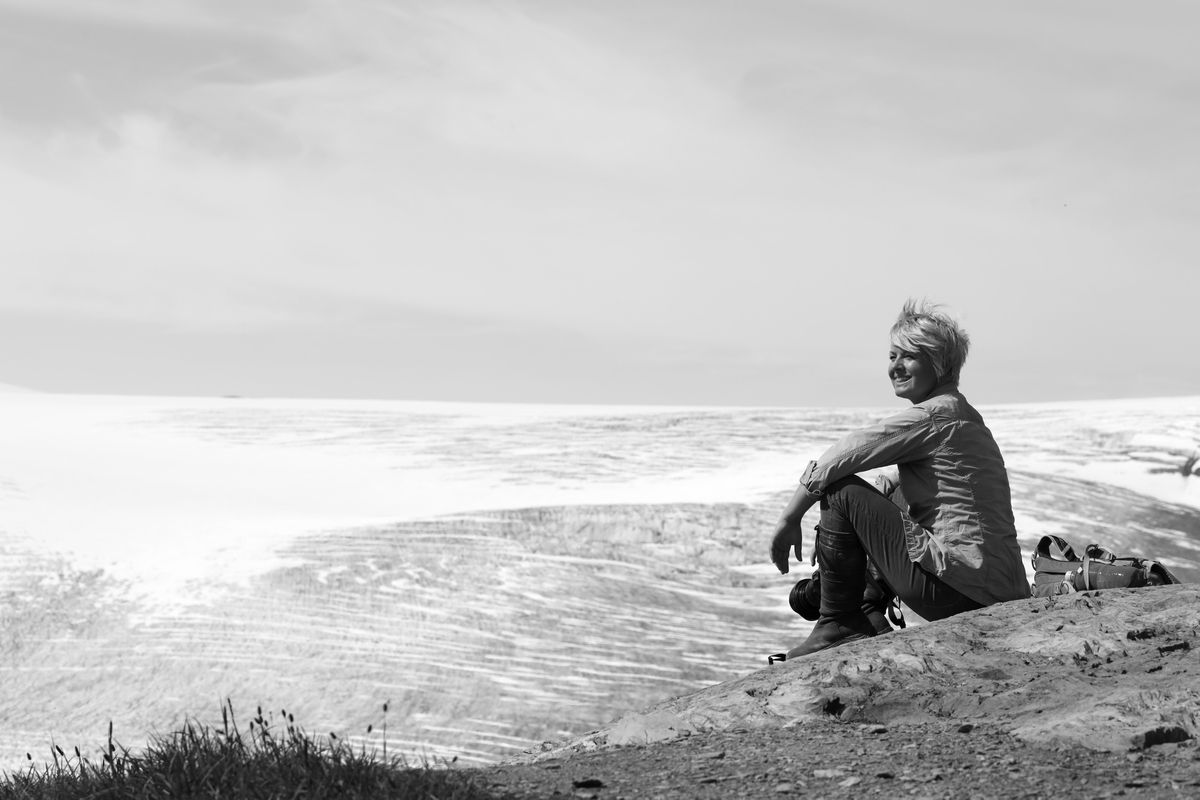 The magnificence of some places cannot be captured in a photo, as Christine Cunningham discovered at the Harding Icefield. (Photo by Steve Meyer)

The magnificence of some places cannot be captured in a photo, as Christine Cunningham discovered at the Harding Icefield. (Photo by Steve Meyer)

The black bear appeared at the edge of the highway from the steep ditch bank and loped across the pavement to disappear in thick alders. Looking to the reclined passenger seat where Christine slept, I thought, well, she’s not going to be happy about missing out seeing a bear.

The thing is, she’s like a damn dog and can sleep anywhere, and on road trips, unless we are going through a stretch known for wildlife to appear, she’ll sleep. Leaving me charged with waking her if wildlife appears.

When she woke, her first question was, and always is, “Did you see anything?”

“A fat black bear,” I answered.

She play-swatted at me and said, “You are supposed to wake me up.”

“He scooted across the highway. You couldn’t have woke up in time to see him.” I can never resist messing with her, so I also said, “You know, you’ll have plenty of time to sleep when you’re dead.”

Since childhood, the memorable aspects of outings, be they extended road trips, hikes into the mountains, hunting trips, fishing trips or a drive to town, are bookmarked by the wildlife seen.

My dad, who is 82, gets up most days and takes a drive on the rural gravel roads in the sparsely populated area where he resides, just to see the wildlife. Whenever we talk, the conversation always revolves around what either of us has seen in our travels.

The other day he reported having seen a mother skunk with four little skunks in tow. If you’ve seen baby skunks, you know they are about as adorable as can be, and I could feel the delight in his voice as he told me about them.

For many, I expect this comes from the bloodlines that makes us hunters and hyper-vigilant to flora and fauna around us. Always looking, and knowing where to look.

Years ago when Christine and I started hanging out together she wasn’t a hunter, and she didn’t see much of anything. I would report daily on wildlife I had seen and she would seem skeptical. Once she started hunting and fell in love with the country, she started seeing wildlife more too, and now spots animals and birds before me on a regular basis.

One day early in our relationship, we passed her favorite coffee shop and she said she wanted to get coffee.

A few days later, our travels took us past a small pond where I saw young coyote hunting voles in the grass along the edge. I slammed on the brakes, turned around in a pull-out and went back to look at him.

“What are you doing?” she asked.

“There’s a coyote on the edge of that pond, going to have a look.”

“Whoa,” she said, in astonishment. “You’ll turn around for a coyote but not to get me coffee?”

It took some time, but now the presence of wildlife in our travels is as important to her as it is to me, and she lets me know a mile ahead of the coffee stop turn.

A few days ago, we hiked up to the Harding Icefield. I had been up once before, and the photographs didn’t do the place justice. It’s a place you must see in person to appreciate the enormity of what surrounds you.

A sign at the trailhead warning of an aggressive black bear with cubs had me hopeful that we might see them. We didn’t.

It’s worth noting that when you look up from the trailhead at what you are going to climb to get to the alpine, it appears daunting. It isn’t. The parks folks have done a marvelous job of carving out the path that made the 3,500-foot climb seem easy.

We started early in the morning, and it was one of those rare days in that part of the world when it gets hot. The view, in brilliant sun, is magnificent — mountain meadows blanketed with wildflowers, an enormous watershed in the valley floor below, a glacier with its crevices glowing blue and the icefield seeming to stretch on forever.

“You know,” Christine said, from her reclining position on a flat rock, “the photos you took before don’t begin to show how incredible this place is. But you never seemed all that excited about it. Why?”

“It is a beautiful place, and I hoped our early start might reveal what I hadn’t seen when I came up before. Something was missing in that collection of photographs; if you think about it, it’ll come to you.”

We took turns glassing the countryside from our rock perch, inhaling the subtle aroma that a flower shop cannot replicate.

We lay there, half-dozing in the heat from the sun and enjoying the rare pleasure of being hot on a mountainside in Southcentral Alaska. In a bit, folks who had started up behind us started to spill into the high country.

“I got it,” Christine announced. “There was no wildlife.”

I smiled and agreed. Whenever we climb into the high country, we always see the mountain dwellers that make their living in those places. The icefield is different. The sky reveals no eagles or hawks; the marmots, if there are any, aren’t talking. The tiny stream beds with their lush vegetation, a favorite place for ptarmigan, do not provide evidence that they live here.

“I haven’t seen any bear, sheep or goat tracks, no wolverine or bear scat, and I didn’t the first time up here,” I said. “I left feeling a bit uneasy then, and it seems it hasn’t changed.”

We’ve been roaming the mountains a lot this spring and summer, and it has been a banner year for wildlife. Everywhere we’ve been going, we’ve seen wildlife or sign that reassures when you don’t see them standing in their tracks.

We talk a lot about the economic value of wildlife through hunting and wildlife viewing, but sometimes I think we lose sight of the simple intrinsic value there is in seeing a moose, a coyote, a rabbit or a spruce grouse on your way to work or to the store, or on a mountain trail. It lifts the spirit when there is wildlife, it seems like the land is healthy. When there isn’t any, at least to me, it feels ominous and unsettling.

On the way home, we spotted a Steller’s Jay, a real treat for us, and blue bill ducklings, a cow moose with her all-legs calf, and just down from our driveway we saw a spruce grouse with chicks in tow. And all was right with the world once again.