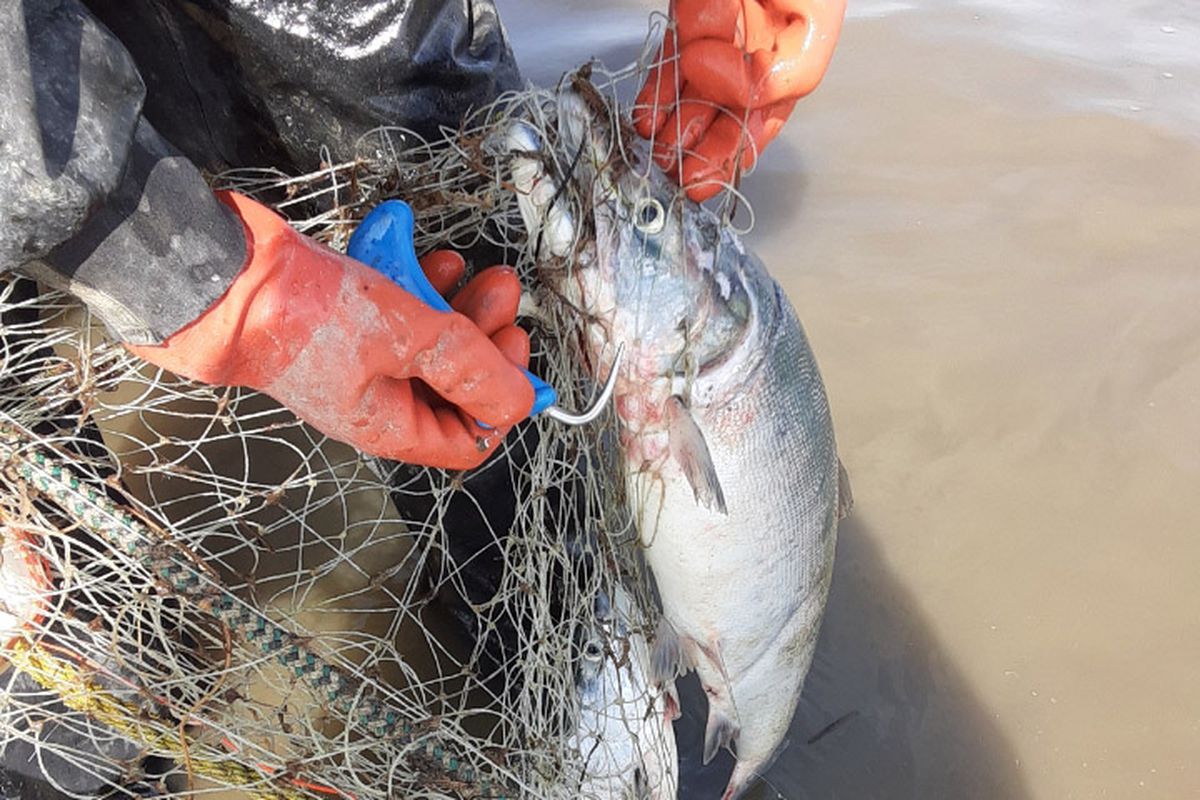 Sockeye salmon are picked from the net with a pick that aids in slipping the gillnet web from the gill plates. (Photo by John Schandelmeier)

Sockeye salmon are picked from the net with a pick that aids in slipping the gillnet web from the gill plates. (Photo by John Schandelmeier)

Most Alaskans know that commercial fishing is very important to the economy of our state. A small number of folks understand the ins and outs of a commercial gillnet operation. Fewer still understand what a setnet fishery is.

When one speaks of the gillnet fishery, the picture that comes to mind is one of a picturesque vessel with a long line of glistening white floats strung out behind. That is a semi-accurate depiction.

The setnet fishery bears little resemblance to that picture.

Setnetting is hard, dirty work — at least in Bristol Bay. If you are wearing name-brand raingear, few would recognize it because it would be covered in mud.

Snaps break, zippers stick, your socks are wet in chest waders that are leaking from fishpick holes and general wear.

If that sounds like fun, then the uninitiated need to know that it costs $150,000 to $200,000 for the privilege to be a setnetter and fish from the beach. All commercial salmon fisheries in Alaska are limited-entry fisheries. That means there are a limited number of permits that can be bought and sold — somewhat similar to a liquor license.

A setnet is just like it sounds. A net that is anchored in place. The general description I provide here varies somewhat around the state, and indeed, there is variance within Bristol Bay.

Net length within Bristol Bay varies between 25 and 50 fathoms. A fathom equals six feet. The net is set near shore on land that is connected to the beach at low tide. The inside end is usually a screw anchor (like those used to hold anchoring lines on power poles) that is cranked. The outside end of is held by either a stationary anchor or a throw anchor capable of holding firm in a strong tide.

Bristol Bay has some of the strongest tides in the world. It takes every good anchor to hold a net with 2,000 to 3,000 pounds of fish in it against a 25-foot tide. Because the bay is so shallow (many of the river estuaries go completely dry at low tide), incoming tides may only have four hours instead of the usual six to complete the transition from low water to high.

Tide speeds of 8 mph are common. There are old setnetters with missing fingers whose hands got caught in lines.

Why do some choose to set rather than drift? That question has as many answers as there are fishermen.

Hard, dirty work though it may be, setting has a few less monetary risks than drifting. A 20-foot skiff with a dead outboard motor can be back in business within the hour. A drift boat with an engine down could cost a season.

Some dislike the competitive nature of drift fishing in favored locations. They prefer that hard work yield their results rather than having to push a bit. Still others cite the initial cost of a setnet operation as the deciding factor. You can get into stationary fishing for about half of the price of a drift operation.

Salmon fishing for sockeye is almost over in Bristol Bay. Most fishers are headed for home, although there will be a few diehards scratching for the last few sockeye. Most of them will be local guys fishing for limited markets. There are also a few fishermen who have made arrangements to process and sell their own catch.

Setnetting is not quite as glamorous as the dashing drift boat working the line in combat fishing mode. Nor is it as picture-perfect as the serene single vessel working on a blue-green sea.

However, for those who don’t mind hard work, little sleep and less-than-ideal working conditions, the setnet provides a diverse and interesting environment. Bears, seals and myriad birds provide the beach fisherman with ever-changing experiences.