How do you keep an aging hunting dog happy and healthy? Try leaving the young one at home 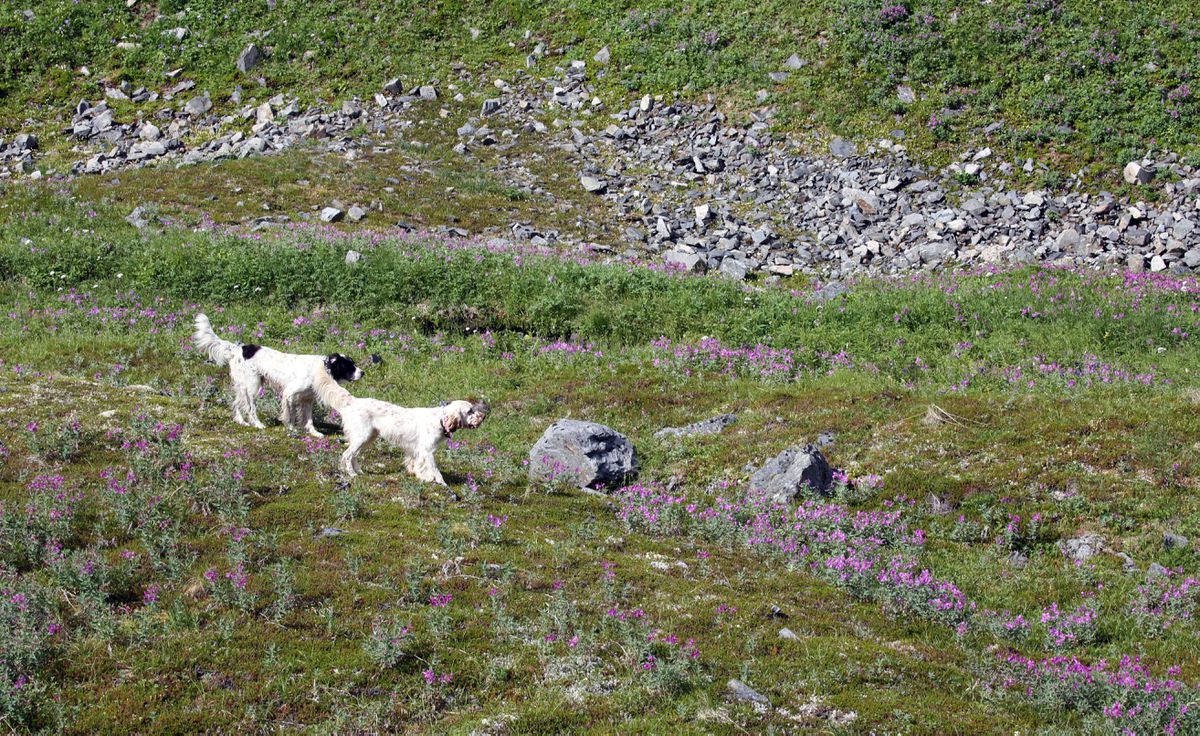 Winchester and Hugo in August 2019 during a moment that those who follow pointing dogs in the field live for. (Photo by Steve Meyer)

Winchester and Hugo in August 2019 during a moment that those who follow pointing dogs in the field live for. (Photo by Steve Meyer)

Between the slips and stumbles as we negotiated the granite and shale slope while trying to keep up with Winchester, Christine said, “I think your boy is trying to kill us.”

At age 3, and starting his fourth hunting season, Winchester believed the pecking order of our pack was me first, then him, and he had yet to forgive Christine for dunking him in the bathtub when he was a puppy.

“Anyway,” she said, “what could live here? This must be one of those tests of character that he learned from you.”

By that time, I had absolute faith in Winchester’s nose and was not conceding that he might be wrong this time. But to myself I wondered the same thing. What the hell would live up here? There seemed to be no vegetation, no water, nothing that would support life in the steep, barren wasteland where he led us.

It was one of those places where your heart skips a beat each time the dog goes over the horizon; will we ever see him again? Visions of the Donner party, that sort of thing.

His casting back and forth through the house-size chunks of granite and the razor-sharp rubble of the valley floor slowed into methodical search, his tail slapping back and forth in anticipation while we closed the distance between him and us.

When we had gotten within a couple hundred yards, Winchester spun to his left and froze like a statue. Christine looked over as my face broke in a broad grin and said, “You and that damned dog.”

It took us a bit to scramble to his point, where he held a covey of white-tailed ptarmigan in a depression that had last year’s snow at the head and a trickle of moisture to a lush patch of the white-tail’s favorite food.

That event marked Winchester’s arrival. His abilities polished over three seasons, his instincts honed to near perfection, and his physical capacity that would mesmerize us for the next five years.

On the second trip to the mountains of Winchester’s ninth season, he and Hugo, the promising heir to the throne, hunted together, their hearts throbbing as they went up and down the mountain slopes, the ultimate reward for gun-dog folks.

Calling them in for a break, all seemed well until I said “Find the birds” and Winchester didn’t launch as he always has. He took off slowly, the reason evidenced by the limp in his right hind leg.

You cannot expect a dog to do what he has done his entire life without incurring some injury. It is a rare trip when he doesn’t cut a pad, tear a nail or slice a foreleg. Minor stuff he pays no attention to.

Research and a talk with the vet suggested no structural damage, more a muscle issue that would correct with rest. I was reminded that he is getting old. I wondered if it was just coincidence that my right hind leg was giving me trouble too.

A couple of weeks later, Winchester was doing fine, and back to the mountains we went, this time without Hugo.

Winchester found some birds and all seemed well. The following week we took Winchester and Hugo, and the leg went bad again.

After healing up the second time, we took him on a few abbreviated hunts, and again, all seemed fine.

Opening day had always belonged to Winchester until the start of his 10th season, when I relented and took Hugo too. Watching the pair pick apart the mountain slopes is a study in grace and beauty that defies description.

Everything, except for my struggles with my own leg issues, seemed well. At the apex of the hunt, we called the boys in for a good rest. As I sat on a flat piece of granite, Winchester backed up to me for the butt-rubbing he has come to demand during breaks. When the break was finished and the boys went off to find birds, Winchester’s limp returned.

After his recuperation, we confined Winchester’s outings to abbreviated romps in the mountains without Hugo. Given my condition, it went fine. Two older men in the mountains. Even in the spring when I got my leg back, Winchester was doing well.

In late May we took Hugo and Winchester to the mountains, just because. Within 20 minutes, and without taking a break, Winchester’s limp was back.

It was a classic case of not seeing the forest for the trees. I might not have seen the “forest” had I not been looking at photos from Winchester’s glory days.

During Winchester’s fifth season, a fellow from the Lower 48, who had an English setter, came to Alaska to hunt ptarmigan. I agreed to take him on a hunt for whitetails.

The mountain valley we hunted was about a mile deep and a half mile wide. Granite-strewn slopes rose up 1,000 feet from either side of the valley floor. My new friend took his setter up one side, and I took Winchester up the other.

Within 15 minutes, Winchester was a speck in the distance as he coursed the entire valley. The other setter was a closer working dog and had no chance of finding birds with Winchester doing what he does. Winchester found whitetails on a talus slope at 4,000 feet.

When we joined up later, I apologized for Winchester stealing the show. The fellow said, “Oh, don’t apologize. That was an amazing display of dog work.”

After reliving that time through old photos, it finally occurred to me that Winchester is so competitive that when Hugo is along, he overdoes it and, in his advancing years, pulls muscles.

Since that revelation Winchester has gone solo. He seems to take his time and do his work more efficiently with less urgency, and no sign of injury. Judging by what he did when we went to the mountains last week, he’ll be magnificent Monday on opening day.