Taking stock of the landscape and its inhabitants 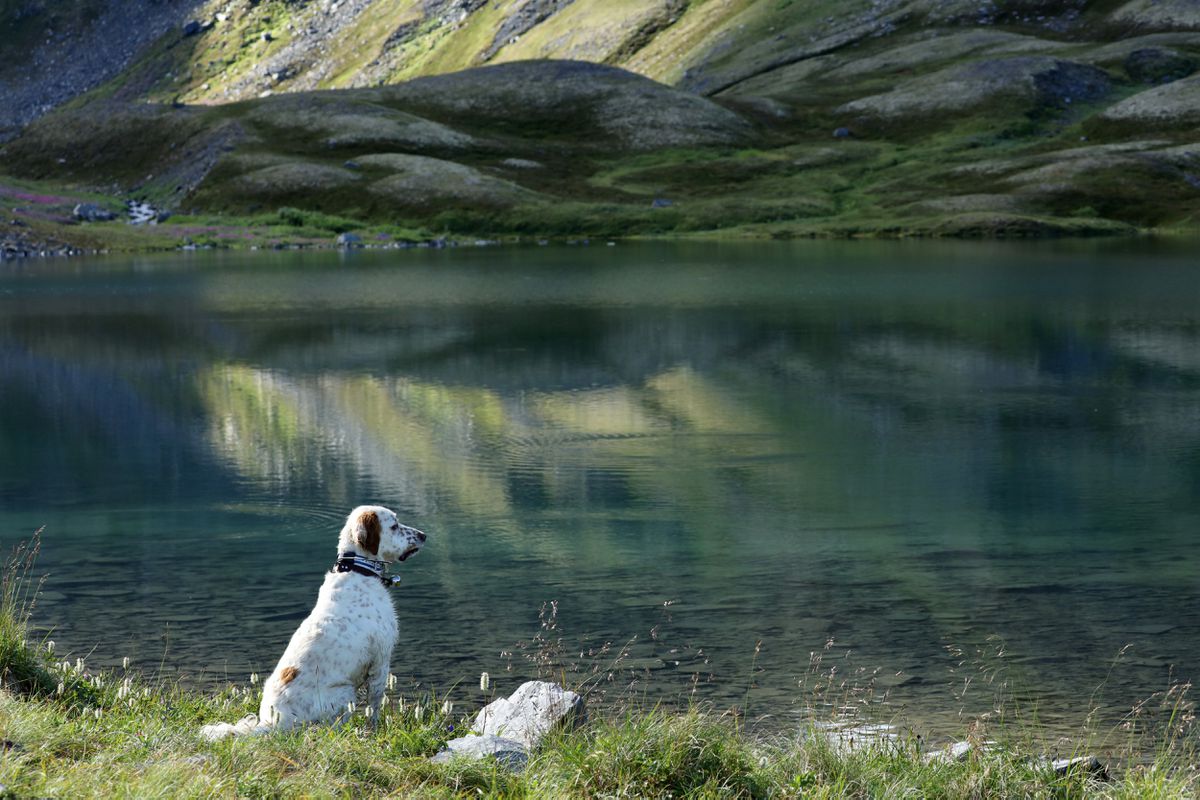 Boss enjoys the view by a mountain lake in advance of the opening of the upland season, in Southcentral Alaska. (Photo by Steve Meyer)

Boss enjoys the view by a mountain lake in advance of the opening of the upland season, in Southcentral Alaska. (Photo by Steve Meyer)

Late in July, we stopped along the shore of a mountain lake to rest and take in the view. The lime and emerald valley reflected in the water, submerging us in a green world. Shafts of light fell on a far hillside, brushstrokes of pale yellow reflected lichen blooms in clear water.

Throughout the summer, Steve and I visited the places we might later hunt ptarmigan with the dogs. It gives us a sense of how healthy the birds are. We encounter a family of birds and see them grow in size or diminish in number, prey to a variety of species — avian and mammal.

A white spot along the shore caught my eye, and I saw my first white-tailed ptarmigan. Only, the young bird was dead and lying on its back. I called out to Steve, and he knelt next to it. When he reached for it, I asked him to stop. Perhaps it had died from avian flu.

Steve picked up the bird and turned it to discover a massive swelling and missing feathers on its head. "You better wash your hands," I said. He looked at me as though I were daft. I blurted out, "I don't think it died from what killed it!" He continued to look at me until I realized and admitted, "I don't know what that means."

As we continued our way up the mountain, I tried to imagine what killed the bird. A predator, like an ermine that lived nearby or the coyote that left its tell-tale moose-hair scat, would have eaten its prey. Domestic game birds in close quarters will peck each other, but that seemed unlikely for wild birds in big country.

Beyond the death of this single ptarmigan, I wondered about the lack of birds we had seen in their usual places. Was the population down because of a boom and bust cycle involving the abundant hare population and an increased number of predators, the late snowmelt, or wet conditions during the nesting season?

Little is known about white-tailed ptarmigan other than wing collections and hunter reports. Due to access, it's challenging to complete spring breeding surveys on this smallest species of grouse that lives its entire life above treeline.

If a population is over-abundant and nutritionally stressed, hunting helps to keep it healthy. But, when the numbers appear low, it gives me pause. In over 20 trips into an area that once revealed several families of birds, I had only seen this one dead one. Although, Steve and Winchester had found a single hen with two chicks. It's possible I had missed seeing these often-invisible birds, even with the dogs to point by smell what I can't see.

We only shoot a few white-tailed ptarmigan each year despite many trips into their country. Hunting places are sacred and exist in the heart as much as the mind. The country itself is never the same — water moves, rocks move, and the flowers rearrange themselves. Over time, I feel a growing sense of obligation to protect the future for the birds that live there and hope their populations remain healthy long after I am gone.

I thought about the unwritten rules of Bobwhite quail hunters — don’t shoot too many birds from a covey and don’t shoot too late in the day and scatter them so they can’t regroup at night. These rules come from what people know about Mr. Bobwhite and what his species needs to survive.

Alpine species are most affected by changes to the climate, and these particular birds are under-studied. I don't know if managed game hunting will hurt a total population, but I wasn't comfortable hunting my favorite bird if it did not appear abundant in a particular area.

On opening day of the season, Aug. 10, I saw other happy dogs leaping from a truck’s cab.

I still wanted the dogs to find birds. And, maybe that’s it — you don’t know how the day will go until the bird appears. If they appear in a large flock, you have your answer.

Steve and I followed Boss to the next level above the lake, and we watched the way the light reflected on the water so that, in the light breeze, it appeared just about to boil with the last of the winter ice melting into it. My eyes deceived me, as I know the water is really freezing cold.

But I sat there and continued to see things that weren't real. I briefly thought that the sun shining on the slate and the mirage of heat was a goat climbing up the rocks. I looked through the binoculars to be sure. Yes, it was just a rock. But it all felt so alive, and if I hadn't looked, I might not have noticed the little purple flowers blooming high up in a shale slide. Then I thought, well, it must have been a goat that carried up those seeds.

Opening day came and went. Winchester, at 11 years old, ran his favorite hills as if he were in his prime. That is until he slowed and reined himself in. He found two willow ptarmigan, and they flushed out the end of a row of willows, too far for a shot.

High on the slopes of the valley, he searched the rocks for white-tailed ptarmigan as methodically as ever. He found none. That’s OK, I thought. It’s never been about bagging birds as much as the chance to see what is possible, enjoy the country and each other, and be ready to meet whatever comes in the moment.

Winchester does what he does, the birds do what they do, and so do we, which is sometimes staring off into a beautiful valley where you imagine birds.

Note: For more information about the status of small game species in Alaska, including a summary of spring breeding and summer brood surveys, recent regulation changes, and what hunters can expect going into the field this season, visit smallgame.adfg.alaska.gov.