No need to get prickly about Alaska’s porcupines, unless you are a dog 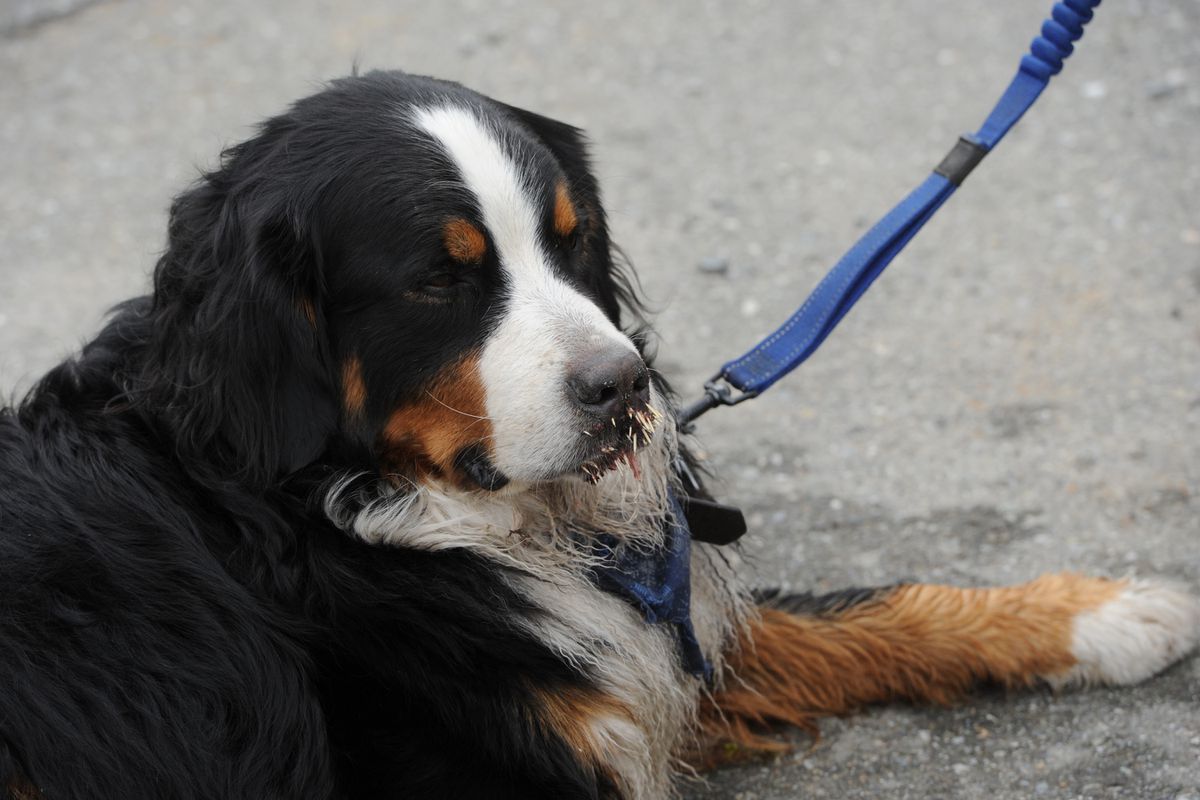 A Bernese mountain dog has a snout full of quills after encountering a porcupine on a hike. (Bill Roth / ADN archives)

A Bernese mountain dog has a snout full of quills after encountering a porcupine on a hike. (Bill Roth / ADN archives)

Porcupines are a familiar sight to Alaskans who drive our highways. Many recreationalists have had a dog return to their side with a nose full of quills.

These slow-moving rodents are the bane of dog mushers. In the past porcupines have also have been life savers to the hungry miner or starving explorer. Yet “quill pigs” are one of the least studied mammals in Alaska.

There have been no population studies in our state. The Alaska Department of Fish and Game has a good general overview of the animal, but there are more important critters to spend research dollars on. Porcupines don’t seem overly abundant in Alaska, but neither does there seem to be a shortage.

Quite a number of porcupines are killed by autos in the spring as they congregate near the asphalt in search of the first green plants of the season. One can only imagine how welcome a little greenery is after a winter diet of bark.

Porcupines are not easily found during winter. They spend 70% of their lives high in trees, and their normal home range of 35 acres may be limited to a single spruce tree for much of the winter.

Despite that, porcupines are relatively poor climbers. They go up slowly, head first. One third suffer fractures falling out of trees. Their feet and claws are relatively small for their body size, which makes climbing difficult. Females weigh 15-16 pounds and males are a bit heavier.

Quill pigs are found over the entire state. Though timber is their preferred habitat, the Denali Highway has quite a number of them. Even the North Slope has a few. Kodiak is one place they are not found, as are some of the open islands and locations along the lower Alaska Peninsula.

Porcupines breed in September and the young are born in mid-April after a 210-day gestation period. The babies weigh a pound or two and are nearly a foot long. Quills are soft at birth, but harden within a few hours.

The young can’t climb like mom and follow her closely on the ground for several months. Young porcupines are climbing and on their own by the time breeding time rolls around.

Because of their 100% vegetarian diet, porcupines are salt deficient. They lick salt from the roadside when they can and munch on dropped antlers. The glue used in plywood has a particular attraction.

In the winter of 1970 I built an 8x8 overnight shelter on a trapline. I was above timberline, so I freighted in a plywood shell. I had no occasion to use the shelter the following winter. The next winter I headed in to restock the cabin and found only the metal bunk frame. Porcupines had eaten the entire cabin. All that remained were a few badly chewed 2x4s.

Quills have long been used for decoration by Native Americans. They have been sewed on skins and used in basketry. Porcupine quills readily take natural dyes and can also be braided in long strings. My wife and I used to make quill jewelry, and I once braided a quill string some 20 feet long to wrap a knife handle. Patience was the key.

The same patience must be used in pulling the quills from the nose of your dog. Most dogs will stand quietly. For dogs who struggle, the solution is to hang them in a blanket sling with holes for their legs. A stick at the back of the molars will keep the mouth open while you go to work with a Leatherman. I won’t say it is easy.

A surprising number of carnivores prey on porcupines. In Alaska, lynx, wolverines and coyotes are common successful predators. As many of a third of the fox I trapped along the Denali and near Paxson had porcupine quills somewhere in their bodies. I once found a dead red fox that was filled with quills in the stomach area.

Once while removing quills from some sled dogs, I had a quill go through my bicep and come out a week later from the back of my arm. It did not get infected and didn’t even hurt, possibly because the quills contain a natural antibiotic and remain soft enough to flex with the muscle.

Despite the inconveniences porcupines can cause, they cause little real harm. They are rarely numerous enough in any area to cause serious tree damage, and few dogs will continually attack porcupines even if they find them. They are calm, quiet animals well worth a second look by serious outdoorsmen.