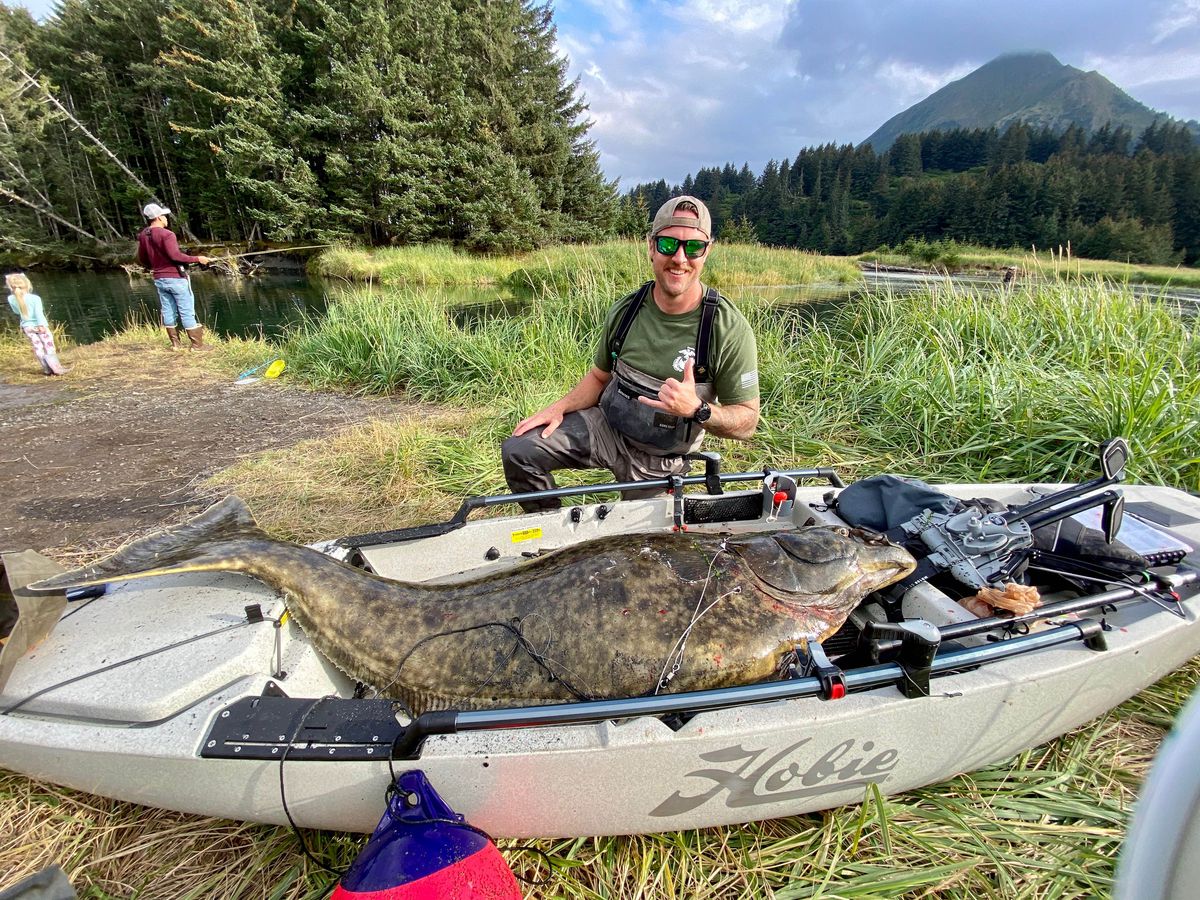 Jay Hicks landed a 186.4-pound halibut while fishing from a kayak last month in Kodiak. (Photo by Sabrina Hicks)

Jay Hicks landed a 186.4-pound halibut while fishing from a kayak last month in Kodiak. (Photo by Sabrina Hicks)

The way Jay Hicks sees it, fishing by kayak is the only way to go when it’s time to go fishing.

“Your fuel is breakfast and coffee. You don’t have to have a (boating) license, you don’t have to slip it,” he said. “The kayak is the most sensible way to get out there.”

Hicks was speaking a couple of days after visions of the movie “Jaws” had flashed through his mind as he labored to land a 186.4-pound halibut while fishing from a kayak near Kodiak.

You know the scene. It’s the one where the shark races away from its pursuers, undaunted by the harpoon strike that left it tethered to a barrel that bounces merrily behind it.

The halibut Hicks caught Aug. 23 in Monashka Bay was subdued after it was struck by two harpoons attached to buoys. It took about 45 minutes to get the fish to surface, Hicks said, and another hour or more to bring it to shore.

Hicks was fishing from a brand-new Hobie Pro Angler 14 kayak, and before you think such an adventure is gonna need a bigger boat, think again. Hicks pedaled his kayak to shore while dragging the fish, and the buoys, behind him.

“The scariest thing is the power of the fish,” Hicks said. “You have to be cognizant of how much drag there is. You get a fish like that close enough to you, that tail will have the ability to overturn a kayak if your drag is set too tight.”

Hicks, 32, thinks he has a shot at a state record or maybe even a world record for a halibut caught by a small craft — which is why he bonked the fish with a plastic club. Sportfishing record books typically forbid the shooting of fish, even big ones like monster Pacific halibut.

The halibut was 80 inches long, something Hicks demonstrated nicely by lying next to it on the ground for a photo.

The tail measured 18 inches across and was sent to Anchorage to be mounted. The rest of the fish was turned into fillets that currently reside in multiple freezers in Kodiak, where Hicks has been stationed for less than three months as a Navy Seabee.

Hicks caught the fish near the end of a long day of fishing with Jeff Woods and Jeremiah Ericson, each in their own kayak. They’d caught some rockfish and were trolling for silver salmon when Hicks hooked the halibut, which he said hit like a brick.

“I just got thumped,” he said. “The rod is lowered, and it’s on. It took about 45 minutes to get the fish to color. It went for some short runs and dives.

“We got it up and struck it with a harpoon, and then struck it with another one, and I thought, ‘This is gonna piss it off.’ It would go on these 15-foot, 20-foot runs, and it was like that scene from ‘Jaws’ with the barrel.”

Once the halibut was tuckered out, the three pedaled their kayaks toward the nearest beach. They were at the mercy of the tides, Hicks said, and the going was slow.

Hicks said fishing in kayaks is a niche sport, but one he thinks is growing.

Tyler Polum, the Kodiak biologist for the Alaska Department of Fish and Game, said it’s definitely becoming more common in Kodiak. Polum said Woods, a member of the Kodiak Police Department who was part of Hicks’ fishing party, is one of the island’s most avid kayak fishermen.

“It’s not uncommon to see at least one person launching a kayak set up for fishing as you head out the road,” Polum said by email. “They are often targeting silvers this time of year as some of the sheltered bays we have get large schools, but other folks like Jeff are targeting halibut, lingcod and rockfish. Even some try for king salmon.

“From what folks have told me, it’s a really inexpensive way to access saltwater fishing here, especially late in the season when almost all species can be caught in fairly shallow water and close to shore. There are also those that just enjoy the challenge of fishing from a kayak versus a larger boat like the majority of anglers.”

Hicks called his new 14-foot kayak — he got it on Friday, two days before he got his huge halibut — “the Cadillac of kayaks” and said it goes for about $4,000.

Hicks, who has been in the Navy for 14 years, grew up in Illinois and has been fishing his whole life. He was stationed in West Africa before he and his family came to Kodiak, and before that he spent a few years in San Diego, where he learned how to catch big fish.

He said he is happy to fish from shore with his children, but if he’s going out on the water, a kayak is his preferred vessel.

“The beauty of the kayak is, the chaos is amplified. You don’t have a lot of room to maneuver,” Hicks said.