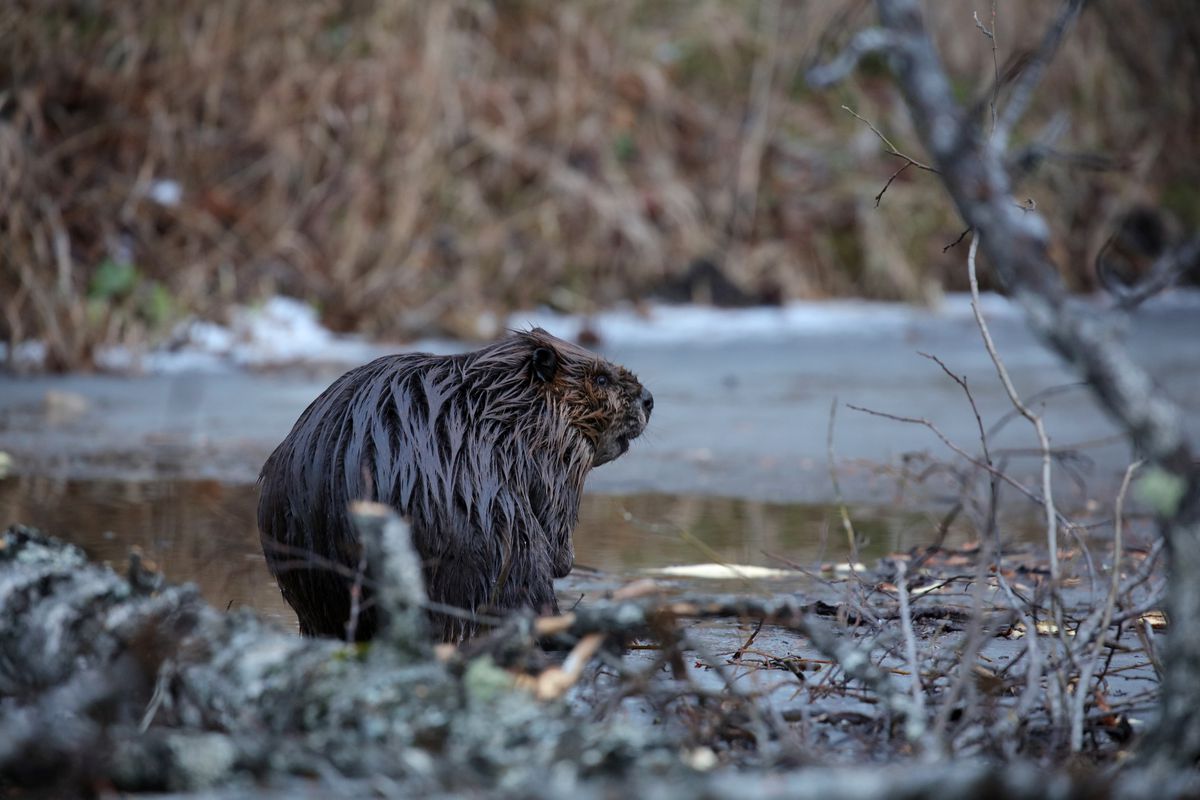 A young beaver (not Willy) sits atop the dam he built in October 2017. (Photo by Steve Meyer)

A young beaver (not Willy) sits atop the dam he built in October 2017. (Photo by Steve Meyer)

From my supine position in knee-deep, mountain stream water, the claps and cheers from the alder brush that lined the stream bank seemed appropriate, given the lack of grace arriving in this position had displayed.

I grinned to myself as I pushed up from the frigid water and folded down the hip boots to drain what water hadn’t already drained through the rents torn in them from my mission. The cheers and the claps were my imagination; far as I know, beavers are incapable of such things.

In the summer of 2018, Christine, Colt and I drove an old, mostly unmaintained road on U.S. Forest Service property to a favorite jump-off place to climb into the high country. It was early morning, and for an instant the water rushing across the road seemed a mirage. The splash of the truck tires dropping into the 8-inch-deep crevice confirmed it was not.

The alder boughs, still resplendent with green leaves that lay in an orchestrated tangle across the stream where it ran beside the road, identified the culprit. An enterprising beaver had decided the narrow gap where water drained from a small shallow pond was a good place to make it a bigger, deeper pond for beavers to do whatever it is they do.

The stream was a small tributary of a larger stream that ran under a short bridge to the northwest.

Below the bridge were numerous beaver ponds, stepped down the valley where previous generations of the large rodents had built palatial lodges. Family tradition, it would seem.

We had a moment about the legalities of tearing out a beaver dam and decided, judging from the way the current was washing away the road, that if we didn’t there would be no road in short order.

We decided to remove enough of the dam to drain the pond below the road-crossing level and call the Forest Service when we got out of the mountains.

Relief flooded over me when I talked with a Forest Service fellow I had gotten to know while doing ptarmigan survey work. He chuckled when told of the dilemma and said it was fine and they would be up to clear out the dams.

A beaver had also dammed a culvert that ran across the road south of the washout. We both figured someone would trap the beaver when the trapping season opened, and that would solve the problem.

Until the freeze-up of the 2018 season, we cleared the dam about every 10 days. The Forest Service was also clearing it, and it seemed other folks pitched in too. By that time, we had developed a fondness for this enterprising animal that did not take no for an answer, and that we had never seen.

We began to enjoy the time spent in the stream, making more work for an animal that displays the capabilities of a journeyman engineer. Each time would reveal more of its amazing creativity and resolve.

When we started up the road in the spring of 2019, we wondered if our buddy had made it through the winter. When we saw no evidence of his presence, it was kind of sad.

A few weeks later we drove through again, and there was a trickle of water going across the road. Christine clapped with delight.

Now, we don’t know if he is a he; it’s just how we referred to him, and we still had not had even a glimpse.

The 2019 season was a repeat of the year before. Between us, the Forest Service and other folks we don’t know, we thwarted the marvelous little fellow’s efforts. By freeze-up this animal had become “family.” We kept our fingers crossed he would make it through another winter.

Early in 2020, it seemed the same as the previous year, except now we had more faith. Once again, one late spring morning, the dam was back, and once again, we were delighted.

We spend a lot of time in the mountains with the dogs, and this year even more. It’s been our escape from the drivel and slop of the world. Almost as if our buddy could sense we needed more work, it seemed he had enlisted help. Maybe Willy (yes, we named him without ever having seen him) had made himself a family.

The dams in the stream and the culvert have become more substantial. The freshly chewed alder boughs, dead sticks and small rocks from the previous years have been supplemented with rocks the size of footballs placed in the streambed and culvert. One end of the pipe sits above the pond bottom by a foot or so, and these large rocks had been hoisted into the opening.

How these creatures manipulate these objects a source of wonder. We have found old, waterlogged root masses and logs encased in packed mud that stagger the imagination.

Wanting to see what goes on, we’ve spent some nights sitting by the dam, hoping to observe. Nothing. It is as if they know, and are not playing. A couple of times, there have been tail-slaps, perhaps telling us to go away.

In the past, the dam would be rebuilt after about 10 days. This year, it’s more like every three or four days.

During the most recent clearing of the dam, a couple of weeks ago, this story’s start occurred. It was a particularly tough job, and water flowed over the road that day.

When I finished, I called my friend with the Forest Service to tell him about the road and that I wouldn’t be able to get back for more than a week, and the speed of the beaver’s rebuilding might demand a visit sooner.

No problem, they would take care of it.

When we got back a couple of days ago, I had one of those pit-in-the-stomach moments, when it appeared the beavers had not done much in 10 days.

The last time we cleared the dam Christine commented that the work was more challenging than climbing the mountain, and how good it felt to be doing something beneficial in the outdoors. Some might say, “Not to the beaver.” But, they are disposed to do what they do and must do to survive. The benefit works both ways — we keep the road, and they keep working.

So, as I write this, I hope the beavers just took a mini-vacation and in a few days they’ll be back to work. If not, then we’ll hope a trickle of water over the road will welcome us back when we drive up in the spring.