Departing ducks, first light on opening day, and the smell of autumn in Alaska 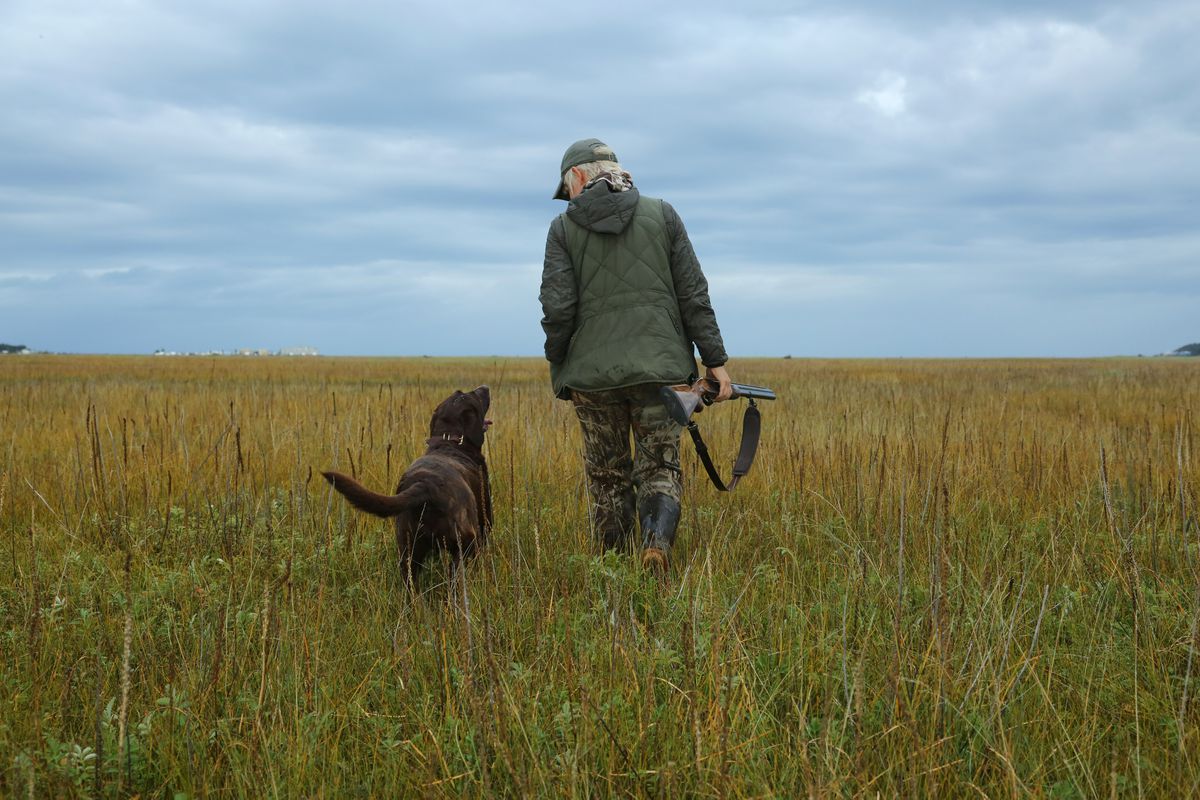 Eleven-year-old Cheyenne heads out with Christine Cunningham to hunt ducks this season on the Kenai Peninsula. (Photo by Steve Meyer)

Eleven-year-old Cheyenne heads out with Christine Cunningham to hunt ducks this season on the Kenai Peninsula. (Photo by Steve Meyer)

On the drive back from the mountains, Hugo lay in the backseat asleep after a long day of running the hills. I was also tired, both from the hike and days in a row without a good night’s sleep. But before I put a stressed-out summer to bed and tucked in for the winter, the fall season was just beginning — the brightest season in its last surge of light.

Fall had not always appeared this way for me.

For many years, I was sure my hunting life began with Steve inviting me on a duck hunt. Only recently he thought it worth mentioning, after I’d shared this favorite story of mine with new friends, that if I recalled correctly, he didn’t invite me.

While it’s true that I am what some might call an adult-onset hunter, how I got that way is left to the flaws of memory.

Unlike Steve, born in North Dakota and hunting at a young age, I was born in Alaska and didn’t hunt. I don’t have memories of checking my shotgun in with the janitor at school and shooting grouse on the way home. There wasn’t an annual moose or anything butchered in my family’s garage or on the kitchen table.

I remember salmon fishing in the periphery as something happening in town and talked about at the restaurant and grocery store.

Despite my faulty memory, I still think there was an invitation. It might not have been in gold foil or like being asked on a date. Steve did not say, “Will you go duck hunting with me for better, for worse, for richer, for poorer, in sickness and in health?”

Instead, if I recall with utmost correctness, he told me he was going duck hunting as he recovered from major surgery and reflected on what he loved most in his life. It was something he had stopped doing as he pursued a career and raised children. It was time for him to get back to it.

I wanted to go, and so he might have said, “Suit yourself.” To which he meant, I will have to show you how to shoot a shotgun and loan you some ill-fitting rain gear. He might have imagined that just one trip would reveal my true level of interest.

The invitation I remember came later. We had been to the gun range, and my shooting was fair enough. If I balked at the heavy rain and crawling through the marsh muck that first day, it didn’t stop me.

When I shot just once at two widgeon too far out and flying away, it still wasn’t clear to me any transformation had occurred. That came after the smoke cleared, and Steve held my empty shotgun hull to my nose and said, “This is what fall smells like to me.”

His words began the invitation to look at the whole experience with new eyes.

I saw the pond, still disturbed and unraveling in the wake of the duck’s departure. The sun rising behind a theater of clouds cast a purple hue on every dewdrop and pond. The smell of wet grass and salt from the Kasilof River’s nearby mouth was cool and alkaline. A feather hung on a blade of grass.

All around me was evidence of the mystery I had disturbed — webbed tracks in the mud, impressions of bodies in the grass, a warm smell seared into my mind and recognizable days later in my memory as “ducks.”

Instead of going on what in my mind was a hunt — a sort of Elmer Fudd affair — I had walked into one small parcel of the realm of wild ducks before they fly to faraway places. It was their morning more than mine. Steve’s ability to sense the grander picture made me realize I’d somehow missed so much more than my shot at the ducks.

That was 14 years ago, and as we drove down the highway, seemingly out of summer and into a sheet of rain ahead, the season had changed. Just days away was the duck opener, Sept. 1 — not just a regulatory date, but an anniversary of sorts.

My memory might have it all wrong because it’s taken years — and Google searches of bird species and grass types — to name the things I saw then. I’ve since learned how to pluck ducks and load shells and read about the way of waterfowl over millions of years and miles and the stories of the old duck hunters, the few who had time for words.

I suppose it’s made me a different person. I use phrases like “first light” and “last light” as exact shooting times one-half hour before sunrise until sunset based on a table provided in the Migratory Game Bird Hunting Regulations and the magic cast of warm light at the day’s golden hours.

This fall feels as new and familiar as all those previous years. Good dogs have come and gone after many shared seasons. Steve and I found a seasonal pattern of spending the summer in the mountains as much as possible, hunting ptarmigan in the August alpine, and descending to the marsh come September.

Opening day with Cheyenne, an 11-year-old chocolate Lab, had us shivering side by side in a duck boat. I was cold, she was excited. We watched the wooden duck decoys Steve had carved this summer. When a goshawk swooped for them in the dark, its flash of light-colored wings spooking at the water’s edge, we were delighted to have fooled a bird of prey.

Then, after the sky faded in, a flock of widgeon whisked by and turned at the sight of the decoys.

Cheyenne retrieved the two ducks I shot, as proud of herself as we were of her.

Not many of us get to sit patiently at water’s edge in rapt attention to the sounds, smells and every ruffled edge of a place that is not home, but integral. Sharing a moment like that — what you sense rather than think or say or remember — is an invitation.