A Denali Highway trip will fill you with wonder, even if it doesn’t fill your freezer 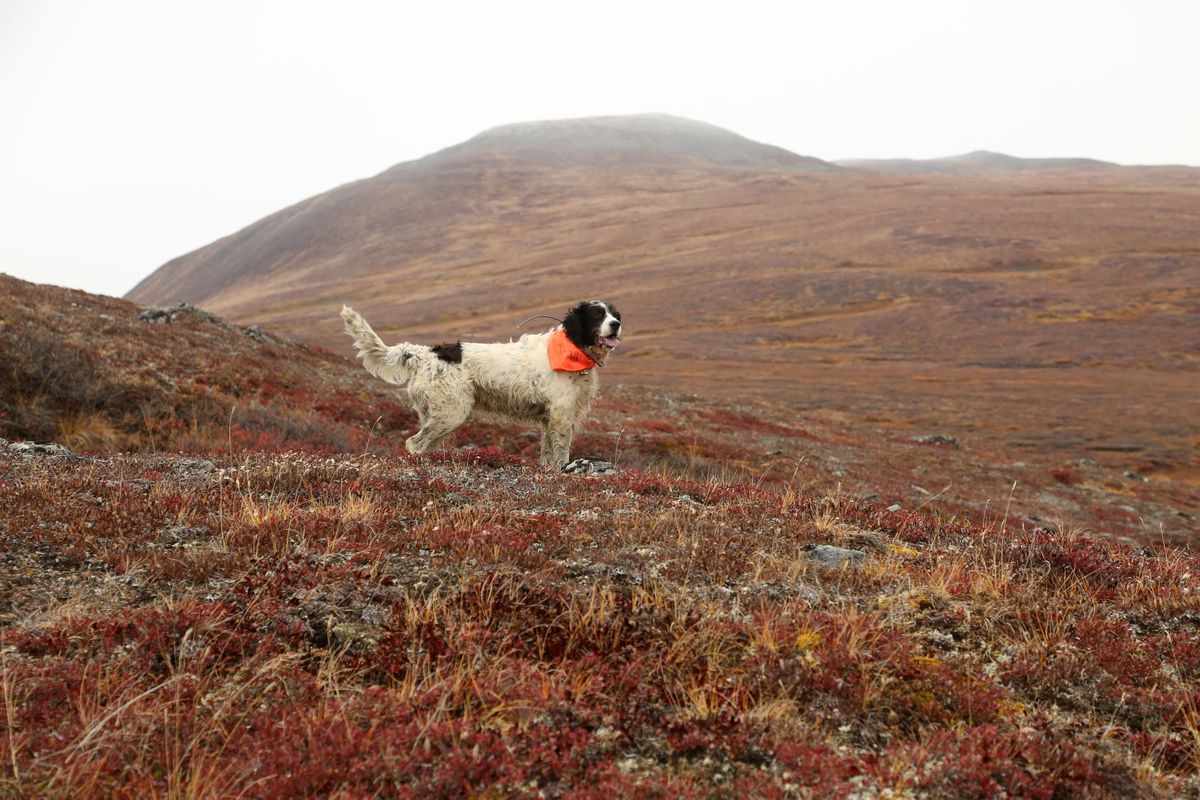 Winchester wears a blaze-orange bandana for safety. Alaska does not require hunters to wear hunter orange clothing, but it has been found to reduce hunting accidents. (Photo by Steve Meyer)

Winchester wears a blaze-orange bandana for safety. Alaska does not require hunters to wear hunter orange clothing, but it has been found to reduce hunting accidents. (Photo by Steve Meyer)

Steve nearly climbed in our truck’s back seat to tie a blaze-orange bandana around Winchester’s neck.

The struggle over putting on a collar, and now the bandana, was part of their relationship — two feisty older gentlemen (man and dog) who had not worn each other down even after a decade.

No matter how much each pretended to be frustrated by the procedure, it was part of their dance and a joy to watch.

Heavy rain had just stopped along the Denali Highway when I stepped out of the truck. Outside, the landscape came alive as more than a view in the damp air. Its vastness had a stunning effect, impossible to capture from a single point of view.

From where I stood, the dark of distant mountains contrasted with the bright fall colors of rolling foothills — black-branched willows with yellow leaves and blades of grass adrift above a lush mosaic of berry reds broken only by sky-colored lakes and gray scree.

It looked like good bird country, which means both a place that is home to abundant game birds and that feels like you’ve been there before. I could visualize Winchester taking off like a flash of white ahead of us before he had even left the truck.

In my mind was information that grouse numbers were not good this year. Recent reports from other hunters were that ptarmigan were hard to find in Interior Alaska, even with good bird dogs.

“You’ll have better luck finding a caribou than a ptarmigan,” one said.

I had along with me a drawing permit to hunt caribou. When I put in for the permit, it was with the thought that this road-accessible area would provide an opportunity to hunt caribou where they are abundant, and that I could enjoy a place I had only passed through and bring home my favorite meat.

Winchester ran ahead of us and began to work wide circles of scent in the willow patches. We watched his silhouette as he ran a ridgeline in sheer bird dog happiness. Even if he didn’t find birds, he was more relaxed and himself in the field.

It’s been my experience, albeit limited, that a plan that includes a little bit of everything never works out as well as a single-focus trip. In the back of my mind, I knew three days was not enough time to hunt birds and caribou successfully. It’s one thing to fit in some bonus fishing or sightseeing, but to plan it that way seemed almost greedy.

I began to realize that my best experiences are when I have ample time to focus and plod over the next hill without anything else on my mind — not the fishing I might do later, the credit card bill I forgot to pay, or whether the dog-sitter back home has exposed our other dogs to the coronavirus.

It helps to know you have hours to peruse the landscape and days to shed the monotony of regular life and find the rhythm of a camp. You begin to be moved by what is going on around — no longer observing, but listening and sensing where to go next. Time is on its terms, without a clock on the wall or my entrenched perspective getting in the way.

Winchester slept in the truck’s back seat while Steve drove and told me to let him know if there was a spot along the gravel road where I wanted to pull over to glass. So that’s what we did — every so often, we stopped the truck, left Winchester to nap, and climbed up on a hill to look through binoculars.

In every direction, there was nothing fixed in the landscape to remind me of the hunt maps I had viewed before the trip. Those maps contained labels and overlays of land ownership, game management units and controlled-use area boundaries. The mapmakers intended these to assist hunters in our “responsibility to know where you are," to respect private property and follow hunting regulations.

But on the ground, there were no light posts, no powerlines and almost no signs. The vastness of the foothills of the Alaska Range seemed to wash my thoughts away.

I sometimes forgot my strategy for how to look through binoculars, which resembled moving just my eyes in the pattern one might use to mow a lawn or trace squares on a piece of graph paper.

Instead, my mind went blank as I watched a single spot on a lone hillside with bare eyes. It was as if I was mesmerized by the possibility that caribou would suddenly appear, and I’d wait in a trance.

The only “animals” I spotted were other humans.

I had heard about overcrowding at popular road-accessible hunt areas like this one. Before our trip, I read various articles that used specialized terms that don’t quite make sense outside the context of wildlife management, such as subsistence-dependent, qualified user, and designated areas.

It made me wonder. If subsistence means sustaining oneself, wouldn’t “subsistence-dependent” be redundant? What qualifies a person to eat an animal to survive? And for those of us who wish to have a lasting relationship with the landscape while still recognizing that we are not purists, a “designated area” might sound more like a bathroom than sacred ground.

These thoughts had nothing to do with the quality of life we were there to find.

On our last run with Winchester, we followed him up to a rock outcrop that gave us the widest view yet. The only boundary was the horizon, and the country seemed to continue beyond that point, unmarked and unlimited.

It turned out we did not have better luck finding a caribou than a ptarmigan. Winchester did find birds.

I found that three days go by fast, but it’s never the number of days that matters as much as making the most of the chance.