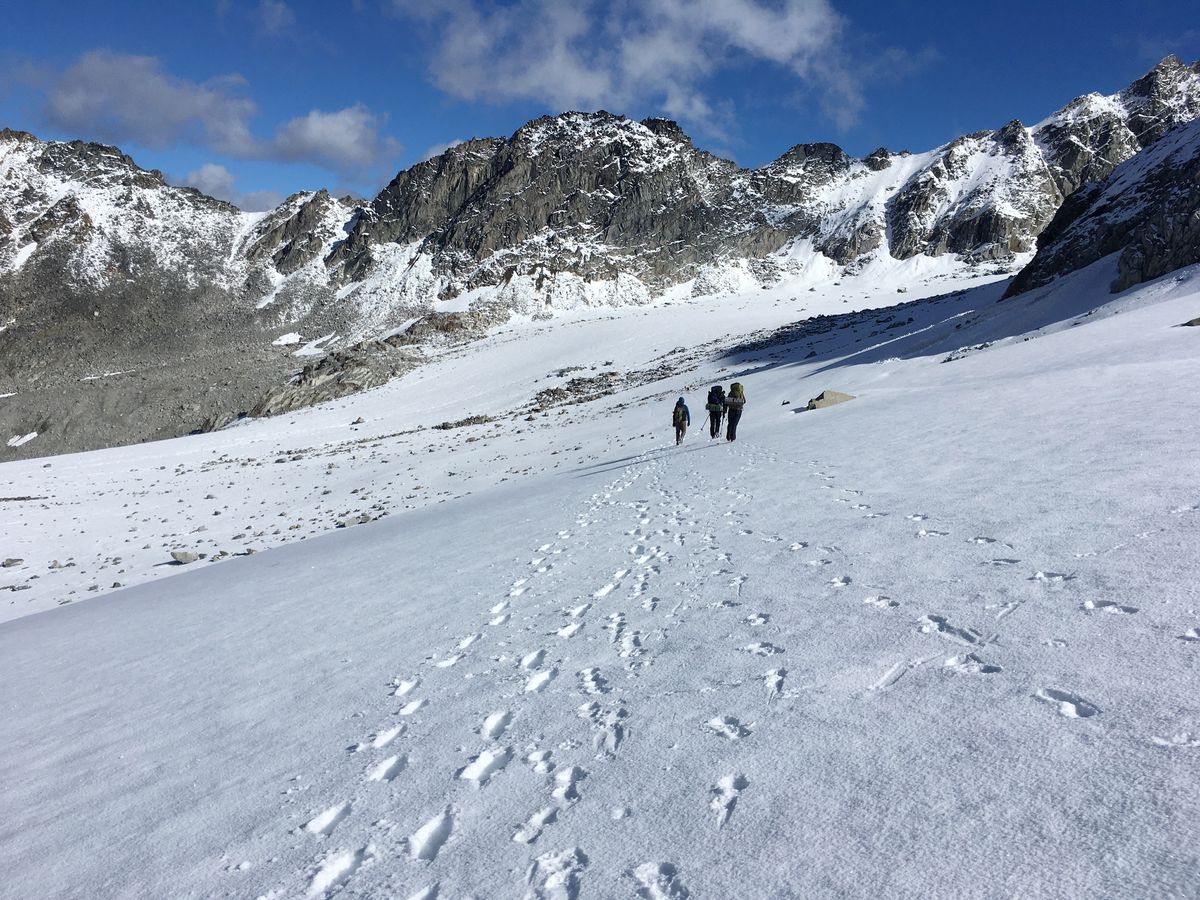 It’s a well-loved, well-traveled and fabled route. There are plenty of write-ups one can access with a simple Google search of “Bomber Traverse Alaska.” And it’s right in my backyard — the trailhead is a 30-minute drive from my front door.

Yet I’d only dimly heard of the Bomber Traverse until a couple of weeks ago.

In preparing for our trip with a few friends, my husband advised me to look up some descriptions to prepare myself for what was in store. That alone was a signal. Wes once led volunteer trips into Nevada’s backcountry and routinely got feedback that the trails he described as “flat” were not. If he’s being proactive about preparing me psychologically for something, I know it’s going to be a challenge.

And apparently that’s all I really needed to know. As I was gassing up en route to the trailhead, backpack fully loaded in the trunk, I sat in the front seat googling a review. I’d meant to do that the week before, but somehow between scavenging camp meals, sourcing IsoPro fuel for the stove and re-watching the TV show “Succession,” I simply hadn’t had the time.

Within our small party we had a detailed map of the traverse, a GPS and even a good old-fashioned compass. Trekking poles and Microspikes were prerequisites for extensive boulder hiking and several glacier crossings.

As with any backpacking trip, we were generally well-prepared but items were inevitably left behind. One of us donned a trash bag as we set out in the rain — are we sure we want to do this, we asked at the trailhead? — and another left camp shoes in the car. I had anxiety about how many layers of clothes I’d brought, wondering if I had enough. A few hours into the hike, I figured I’d better.

The Bomber Traverse pushed me right up to the edge of my ability and comfort. It was equal parts spectacular and terrifying. I don’t know who these humans are who do first ascents — not me, that’s for sure.

We spent our first night at Upper Reed Lake, squinting and cocking our heads at the snowy mountain face dramatically looming above the deep green-blue lake ahead of us.

When we asked Wes where he thought the route was, he pointed and said, “Straight up the gut.”

How, though? We sipped our hot drinks, facing the mountain wall like a TV. Heads tilted slightly back to take in the entire height, we squinted and scanned for anything resembling a route.

When it got too dark to see, we gave up and turned in for the night.

As it turns out, he was right. We picked our way along the edge of the lake in the morning as the sun finally ascended high enough to hit the valley, bringing with it at least 10 degrees of warmth above our frosty start.

What appeared as a sheer rock face from camp was actually a series of boulder-filled rises, dotted with haphazard cairns. We didn’t follow the cairns, but noted them as affirmations of our route.

We climbed slowly, giving each other berth partially for social distance but also to stay out of the way of falling loose rocks. The sun shone brightly. Shadows meant lichen was still icy from the morning, and I tried to carefully get footholds only on sun-exposed rock.

I reached the narrow notch at the top of the climb and was gobsmacked by what lay on the other side: a vast, white expanse as different as could be from what I’d just climbed.

Bomber Glacier began right there at the top, with ropes in place that brave climbers can use to help them down the first steep face. After that I could see a trail of footsteps in the snow that looked like easy walking, framed by sharp spires of mountains as they gently descended into a valley. In the distance I could see something glinting on the snow — a friend said it must be the crashed plane the traverse gets its name from.

Microspikes went on and backpacks were lowered down, followed by people. After a short descent that I’ll go ahead and call sketchy — slippery and steep — we were on the glacier. We walked under a big, blue autumn sky that felt more enormous than usual.

I felt awe and a kind of heart-expanding peace punctuated by the crunch-crunch-crunch of my shoes underneath me. We moved slowly in bright light reflected everywhere by snow.

I carried that feeling with me into the valley where we made camp for the night, within sight of the small, unassuming Bomber Hut — maintained by the Mountaineering Club of Alaska — across a blue-green creek. Fall colors cast across the expansive valley: reds of fireweed and berries, yellow aspen and electric blue creeks that converged downstream.

Alaskans know the fleeting feeling of fall when we experience it, how it smells and what it means. My nose was cold as I turned in for the night, but my sleeping bag felt drier and warmer than ever.

Of course, Alaska laughs last. The next day brought another glacier crossing, followed by a descent down Backdoor Gap that gives new definition (for me) to the words “steep” and “harrowing.” Squinting down from the top, I found Mint Hut for scale and immediately looked away. The height made me feel nauseated, and I knew I needed to stay focused on the simple act of taking one step at a time. It was more of a one-butt-scootch-at-a-time approach that eventually brought us to the hut.

I’ve been saying this was probably a once-in-a-lifetime trip for me. We lucked out on the weather. The group of friends was wonderful (yes, I’m biased). Anything else would be at best a grind and at worst terrifying.

Yet in the last week the memory has already been distilled into rose-colored hindsight. An entire new playground in my very own backyard opened up. I find myself wanting to go back.