Alaska hiking 101: Beware the ‘seductively close’ end of the trail 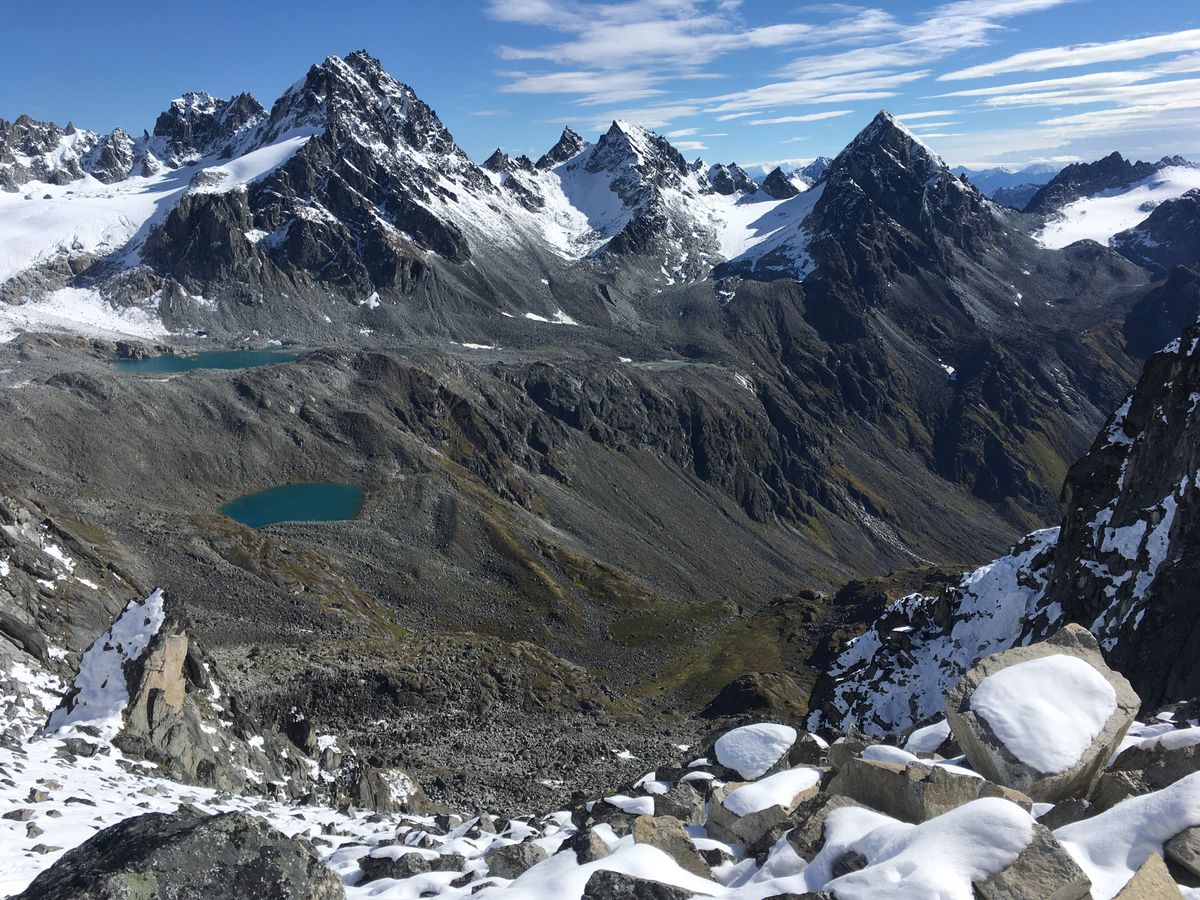 View from the top of Backdoor Gap of the Bomber Traverse in the Talkeetna Mountains. For scale, squint at the lower right-hand corner and you will see the tiny green roof of the Mint Hut. (Photo by Alli Harvey)

View from the top of Backdoor Gap of the Bomber Traverse in the Talkeetna Mountains. For scale, squint at the lower right-hand corner and you will see the tiny green roof of the Mint Hut. (Photo by Alli Harvey)

On our first day, hiking deep into Hatcher Pass, my friend Jed said offhandedly that Backdoor Gap was no joke. If we got there and it was icy or otherwise impassable, we’d want to seriously consider turning around.

I turned this idea over in my mind as I hiked. It was my first time on the Bomber Traverse. We had two full days of walking ahead of us before we hit Backdoor. What Jed was saying was that this one section toward the end was so steep and potentially dangerous, backtracking could be our safest bet.

Many times in a backpacking trip one person will have just a little more information. My husband had run up past Reed Lakes earlier in the summer, so he was familiar with the first leg of our journey. And Jed had walked up the Gold Mint Trail to the Mint Hut on a Fourth of July not too long ago.

He remembered gawking up at Backdoor Gap, almost impossibly steep.

Luckily, by the time we reached the top, the weather was fine. We took our sweet time maneuvering down, boulder by wobbly boulder. It was difficult and painstaking, but pretty soon it was over.

Clouds had gathered by the time we reached the bottom but I hardly cared. I found the first mossy, spongy ground I’d seen for a while and parked myself on it, chewing on a three-day-old compacted peanut butter sandwich that in any other scenario would be inedible.

When Jed sat down and settled in, he made the remark that echoed through our evening.

“You know, and I kind of hate to bring this up but ... the end is seductively close. We could hike out tonight.”

That kind of thought strikes like a match. My brain lit up with thoughts of bed, and wine, and television. Maybe all at the same time, I thought, delighted and repulsed by myself.

When I tried to compare that scenario — bed, home, warmth — to another night of setting out in the now-gloomy mountain pass, it was no contest.

The group mulled it over, and eventually agreed.

He promised one more steep downhill section past Gold Mint Hut, but nothing like what we’d just completed, followed by the smooth-sailing flat, winding path of the Gold Mint Trail.

It was 4:30 p.m. when we made the call. Our friends decided to boil up dinner before walking.

Satisfied by the dense PB&J bomb sitting in my stomach, I was content to simply rest my legs. My husband found a rock that resembled a pillow and laid out on the tundra. It was cloudy, so there was no sun warming us, but by this time in our journey simply not moving felt very, very good.

Still, the draw of home is powerful. We started walking again at 5:30 p.m.

Seductively close, I thought, as we passed the hut and started down switchbacks toward the river. Yellow aspen lit up the valley, dotted with blazing late-season fireweed. The cool blue river dramatically wound through the colors far below us.

I noticed the beauty, but barely. Most of my focus was on my aching legs, taking careful steps down yet another slope.

We reached the river valley and sure enough the trail immediately flattened, leading us along the winding river. Our new problem was mud. We carefully sidestepped our way along several sections of slick trail.

I forget sometimes what a mile is like while hiking. It’s not the same as an asphalt mile. Wishful thinking stretches a quarter mile of trail into a full mile.

When the clouds finally broke and it started drizzling, I was sure we were 3 miles into the hike. I was equally sure I recognized this one spot where I’d hiked out to once before.

Jed was saying something about “mile markers” on the trail, but we hadn’t seen those yet so I didn’t believe it. I vaguely wondered if they’d been taken down since the last time Jed was out here.

It started to really rain around the same time we lost the trail to a beaver pond, and I felt the dread sink in. Wet brush slapped my thighs as I bushwhacked toward what might have been a trail. We did eventually find it, but again, the detour took time and energy. It was starting to get dark.

Still, spirits lifted back on the trail. My husband trotted along and offhandedly remarked there were 3 more miles of trail, max — probably more like 1 mile. There was talk of takeout pizza. We agreed on Hawaiian.

Thirty more minutes of slipping and sliding along the muddy, puddly trail later, we saw the mile marker. Four miles. It was sobering, and infuriating. Four miles?! How?! Pizza dreams evaporated. I gritted my teeth and picked up the pace.

At mile marker 2, we stopped in the downpour to pull out headlamps. By mile marker 1, it felt that were were being tricked. Surely these miles were measured incorrectly, because each one took an impossible amount of time. Seductively close. (We learned later it was actually a 9-mile, not a 7-mile, trek).

We reached the parking lot in a pitch-dark downpour. It was 10 p.m. Every layer of clothing was sodden and cold. We hastily got to our respective cars and departed, exchanging weak goodbyes and promises to debrief later.

The bed that night was warm. It was far too late for takeout pizza, but after hot showers we heated up frozen salmon cakes.

Seductive, indeed. Close, not so much, but worth it.