A good duck dog is always by your side, even when she’s too old to join you for every hunt 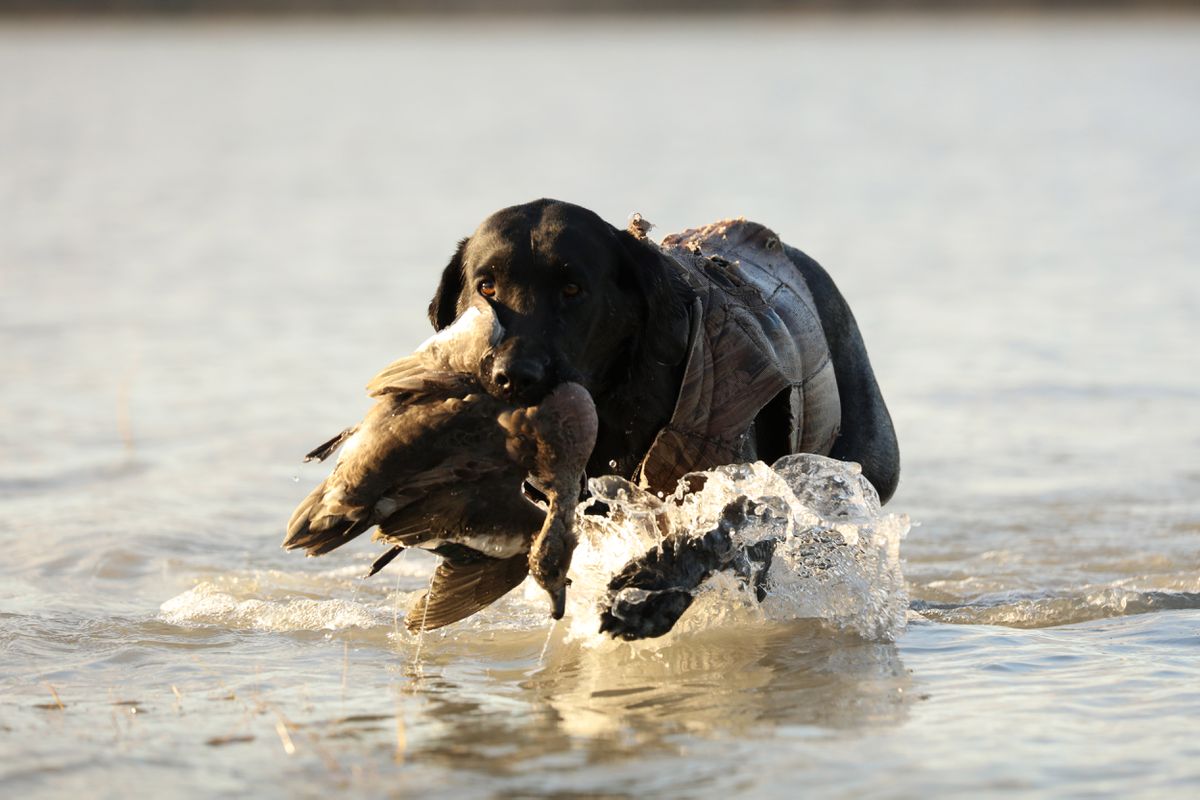 Betty retrieves a widgeon this month on the Kenai Peninsula. (Photo by Steve Meyer)

Betty retrieves a widgeon this month on the Kenai Peninsula. (Photo by Steve Meyer)

Four of us sat in a duck blind, going on our second hour of not seeing any ducks. The conversation had died down, and we kept a quiet company with Betty, a long-legged black Lab in her fourth season, sitting sentry just outside the blind.

For a few days, Betty was our duck dog.

She sat nearest to her person and watched the sky the same way we did. She didn’t move at the sound of a duck — whether a widgeon whistle, a hail call, or a duck call ringtone.

The only thing that would move her from her person’s side was when he sent her after a downed duck. Only then would she launch from the blind with the velocity of a springbok across the mud.

Just as she met the water, she transformed from four-legged beast to seal; her black head and nose were all we could see at the surface of the water.

When she emerged carrying a drake mallard from the muddy Cook Inlet water, her long legs returned to her as she met land.

I cheered as she trotted across the mud, cleaning herself in the tall grass while we all stood in the blind awaiting her arrival. By the time she got to us, I could see the bright blue on the drake’s wing feathers and its thick green neck hanging from her jowls. I reached out, forgetting for a moment she wasn’t my dog.

This realization came as a surprise sweep of emptiness when she passed by on her way to her person’s welcoming hand.

Steve and I had hunted with Betty only a few times this season. Even if I hadn’t built a relationship with her and watched her grow from a pup, I enjoyed getting to know her and seeing how proud she made my friend.

I also couldn’t help but miss Cheyenne, our small chocolate Labrador, who now has a silver muzzle and gray around her foot pads and had to sit out a few nights back at home.

The tidal mud and strong currents are too much for her hips now. A week earlier, she sloshed down a slough with about a foot of water in the bottom. When she attempted to jump across, she missed and slipped tail-end into the muck. After fighting enough to wedge herself, she gave into gravity and lifted only her brown eyes upward to let me know in no uncertain terms she needed “a little help here.”

Betty’s good manners reminded me of Cheyenne’s quirks that not every duck hunter would love. As she has gotten older, for instance, she had gotten more vocal.

At dinner time, she makes what I call “itchy sounds” — an umpf, umpf, umpf that lifts her slightly off the ground as she wiggles and shimmies her head, bumping your knees like a shoulder tap.

She does this in a duck blind as well. And if in her attempt to communicate with you she is ignored for too long — at dinner or when ducks are coming into decoys — she might bellow as if somewhere in her ancestry a bloodhound was chained to a back-yard tree to bay the night away.

They might not like it if your dog moves around too much in the blind or retrieves a duck before the given command. That kind of impolite behavior is considered unsafe in a small area packed with people, shotguns and a slick muddy floor.

Yet Steve and I had accommodated some of Cheyenne’s bad behavior to let in the good that came with it.

For instance, Cheyenne can smell ducks. And one time, while sneaking up on a pond, she crawled beside me for a hundred yards.

We’ve never lost a bird with her, and that’s saying a lot.

When she retrieves a duck, she carries it straight to me and then circles twice before letting me have it. While I look it over, she snatches at it a few times. It’s not perfect behavior, but it’s ours.

Every retrieve carries with it an affectionate exchange in which she is a puppy again, and I fawn over her. A puppy doesn’t have to be perfect.

No, I thought. As much as I missed Cheyenne, she was right there with me, and she would be whenever I was hunting ducks. There were too many memories -- the way she sat on the floor of the duck shack after a long day and caught herself from falling asleep because she didn’t want to miss a thing. Her glance of recognition when we both hear a hen mallard quack as we sit in the dark before sunrise.

Even if she was at home asleep, her gray feet twitching with dreams of swimming slack water, we were together.

I glanced over to my friend, who scratched Betty’s head as she tucked in next to him.

There’s just something about a good duck dog that never leaves your side.