Surprise! It’s winter in the Alaska Range foothills, so if you’re planning to hunt caribou, be prepared 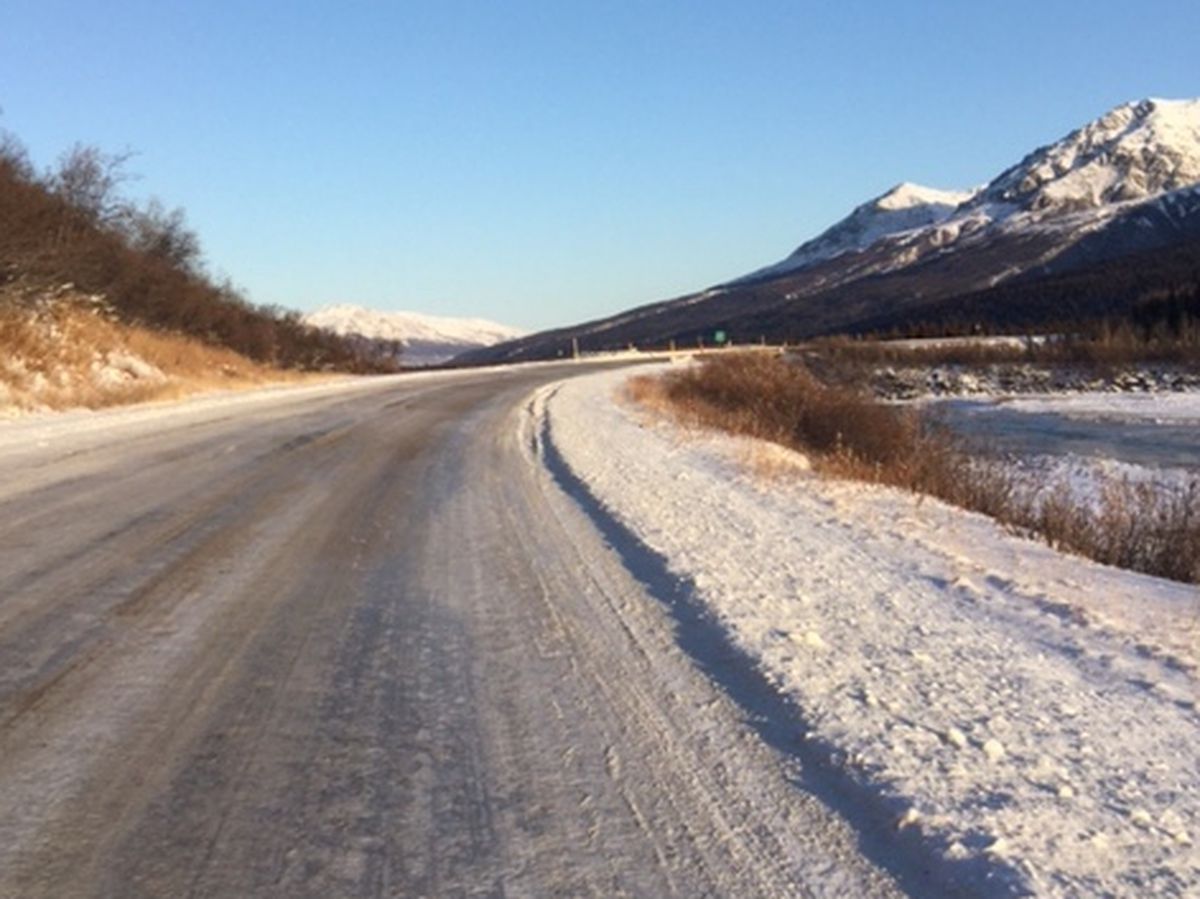 Snow appears on the road near Miller Creek by Mile 217 on the Richardson Highway. (Photo by John Schandelmeier)

Snow appears on the road near Miller Creek by Mile 217 on the Richardson Highway. (Photo by John Schandelmeier)

Our extended fall weather came to an abrupt end a few days ago. Sweatshirts and tennis shoes were left in the corner of the living room while my household scrambled around trying to remember where the heck we left the bunny boots and polar fleece.

The first cold weather and snow that stays is always a surprise.

The Farmers Almanac predicts that Alaska will have a milder-than-average winter with plenty of snow. The National Oceanic and Atmospheric Administration says we will be warmer than average and also drier — at least in the Interior.

The foothills of the Alaska Range have been threatening to hold snow for the past month. On Oct. 12, Paxson saw its first measurable snow that stayed on the ground, as did the Denali Highway. Isabel Pass needed plow trucks for the stretch of highway near Trims Camp.

The Denali could use a plow, but road maintenance ended on that highway at the end of September. The highway was still passable on Wednesday, but travelers are on their own. The Department of Transportation does not recommend travel, so shovels and chains would be good items to carry. And maybe a snowmobile or two.

Some years ago, when I was trapping on the Maclaren River, some dude from Anchorage slid off the Denali Highway coming down the Maclaren Summit. This guy had a 4x4 Toyota with a lot of bells and whistles. A day of struggling to get back up on the highway had taken most of the bells off and he was all out of whistle by the time I came by on my Ski-doo Tundra.

There was no amount of convincing that could get him to believe that the Department of Transportation was not going to come out and plow the road so he could get back to Paxson. He spent a week in his truck canopy.

His worried wife left messages at Paxson Lodge. I finally called her and explained the situation. After I relayed her message to him — “Leave the $%!#$ truck and get your sorry butt back home” — he rode out with me on snowmachine.

Funny what it takes to finally get the fact of winter through to some people. Once the snow stays, it automatically seems time to break out the snowmobiles. That is a good idea, but don’t forget there is no real ice yet. Ponds deeper than 6 feet shouldn’t be considered safe. ATVs can’t climb back up on ice edges without help from a winch or one of your stronger traveling buddies.

There will be a ton of folks in the woods this week when the Nelchina caribou hunt reopens Oct. 21. Some of the hunters will be unprepared. That is always the case. Be ready to cheerfully help your fellow hunters and recreationalists out of whatever pickle they have managed to create for themselves. Next time it could be you.

With the expected increase in hunters, plus improved access, hunter success should be a better than it was in September. The caribou are beginning to move, though very few are being spotted along the Richardson Highway as of yet. There is word there are caribou near the west end of the Denali, but not having been there in the past couple of weeks I can’t personally confirm that.

Truthfully, there isn’t enough snow for snowmobiles unless you have a beater that can be used. A good option would be jet sled or a kid’s sled of any type. If you have a dog or two that can pull, bring him. It is a lot easier to pull half a caribou than pack it.

Remember that a big stretch of the Richardson Highway from Sourdough north is off-limits to state permit holders. Along the Denali, some land between miles 9 and 13 is federal only. Tangle Lakes is also federal land. There is also a fair amount of walk-in-only land near Haggard Creek.

There may be “adequate” snow cover to use machines in the Tangle Lakes Archeological District, but it would be wise to check with Glennallen BLM before traveling off designated trails in that area.

Paying attention to land use regulations is important if you want a smooth, trouble-free outdoors experience. More importantly, it is wise to remember that winter has actually come to the Alaska Range. It may be warm in the Mat-Su, and Fairbanks is undoubtedly light on snow, but don’t forget that if you are coming to hunt, it is winter here.

Stocking hats, polar fleece, mittens and good boots may seem unwieldy and cumbersome. Bring them. You will be glad you did. My knee boots are going to be lonesome for the next six months — until the spring thaw surprises me.