Happiness may be a warm puppy, but dogs are cool with the cold if you take the right precautions 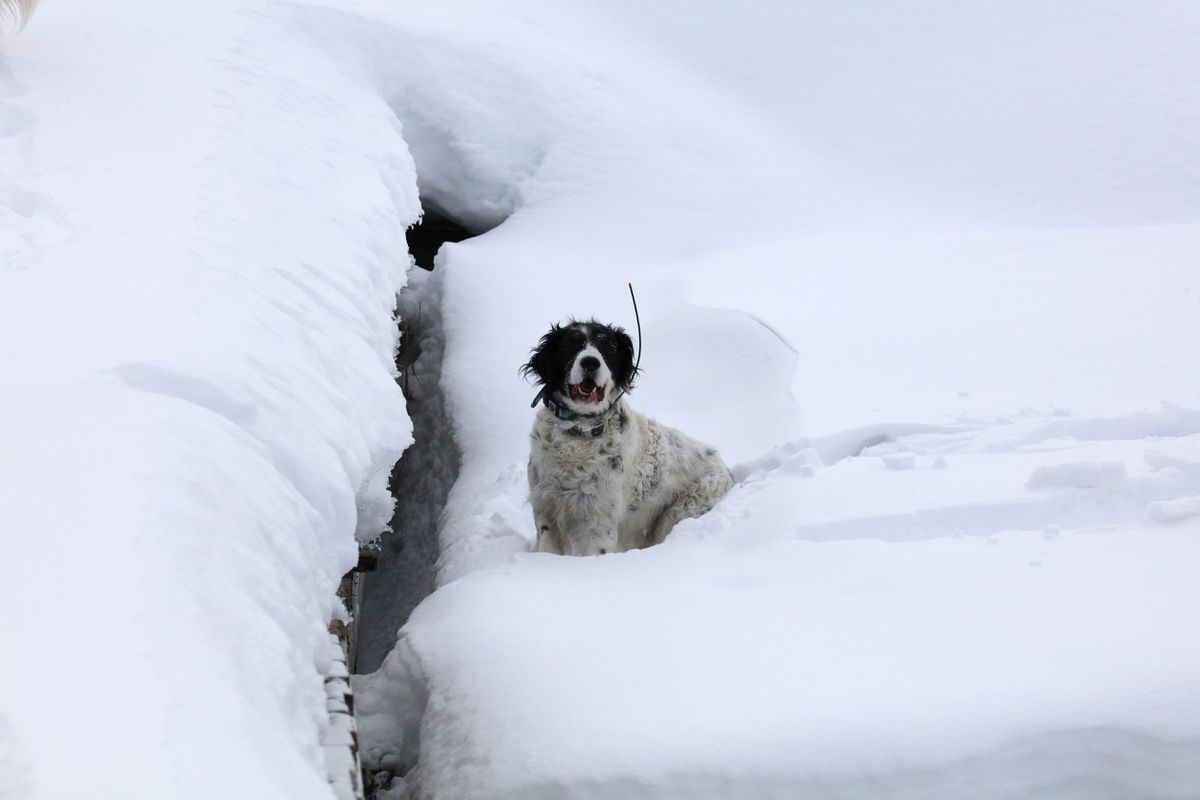 Winchester pauses near a snow-covered bridge. (Photo by Steve Meyer)

Winchester pauses near a snow-covered bridge. (Photo by Steve Meyer)

This summer, I stopped to read a sign posted at a trailhead. It warned people hiking with dogs that there was no water available above treeline.

I was grateful to see a reminder that might save a dog’s life — I had heard a story about a dog whose owner had to carry her dog off this same trail due to dehydration.

Hydration is something Steve and I think about often when planning our trips with dogs into the high country. In places where there are not streams, we pack extra water for the dogs.

In cold weather, water is even more critical. Dogs can get more dehydrated in winter conditions due to dry air and less inclination to drink.

Some people will train their dogs to drink from a water bottle — something I wish I had done with our English setters when they were younger. They have their quirks, and one of the most frustrating was exhibited by Boss this summer when he would not drink water.

We were on a seven-mile, out-and-back hike, and it was about 70 degrees outside — plenty warm for an active dog. Boss was panting, and I knew he needed water. I stopped by a creek running under one of those charming boardwalks you find along lowland trails, a long series of boards that angle across streams or swampy areas.

Setters are known for being eccentric, sensitive and sometimes picky. “Drink some water, Bossy,” I said.

He looked at the water, which made me think he might have understood what I said. But then he looked back at me. His expression made me think if he could talk, he might say, “But mother, that water is absolutely disgusting.”

After I splashed water on him and tried to pour water from my Nalgene bottle into his mouth while he resisted, I got frustrated. I figured maybe he would drink the more refreshing water at the falls we would encounter further up the trail.

When we got to the falls, Boss was panting hard but still had not had any water. We were surrounded by a mist and what looked like an advertisement for sparkling natural water. Yet he turned up his nose at having a drink from the abundant supply. We had one of those one-sided conversations that sounded like a couple’s quarrel.

“This is ridiculous!” I said. “You’ve got to be thirsty.”

When he did not admit to thirst and continued to run around (at least he’s not lethargic, I thought), I figured the best thing to do was head back and give him water when we got to the vehicle.

The next time we went on a hike together, Steve suggested I take Boss’s water dish with us. When we got to a fast-moving stream and Boss wouldn’t drink, I scooped up some water in his favorite dish. Whether we were next to a clear mountain stream or I filled his dish with my water, Boss only drank from his familiar container.

One of the things I am guilty of is anthropomorphism — I often attribute human qualities to dogs. This may be fine when it makes you more empathetic or is merely an expression of joy. But there are real dangers to anthropomorphism, and I was guilty of one when it came to hydration.

Besides having conversations with Boss that assume he knows what “ridiculous” means, I had believed that giving him electrolytes would help him stay hydrated. I had read articles from what seemed like good sources that advised it.

It wasn’t until I talked to an expert on dog nutrition that I learned that believing electrolytes are good for dogs is a common misconception that has its source in the “What’s good for us is good for them” mindset.

My expert friend explained that humans lose salts to sweat, but dogs don’t sweat and are efficient at monitoring electrolytes. Giving them salt or electrolytes causes them to expel water. He told me not to force water on a dehydrated or hypoglycemic dog and, if I did “bait” the water to encourage drinking, it was best to use a low sodium chicken broth or bullion.

We make sure not to feed the dogs for a few hours before or after a big day afield — age-old advice that is true in all weather.

As we go into winter and colder weather, hypothermia and hypoglycemia (low blood sugar) are equal concerns. Since our dogs are hunting breeds, they are often exerting themselves to stay warm, and we watch them to make sure that their behavior does not indicate any issues. If they start slowing down, getting clumsy or shivering, we check them over.

Heading out with dogs in cold weather, especially in the backcountry, is not something we can do any time we feel like it. We often wait for perfect snow conditions and take extra precautions. Ideally, the snow is dry, and there is a crust that is thick enough to support the dog’s weight. If the snow is wet, it is more likely to clump in their fur and footpads.

We trim the fur around their feet and use Vaseline as a barrier to prevent snowballing and abrasion as much as possible. Many people use Musher’s Secret or booties to protect their dogs’ feet. We also try to remember to take pliers to break up snowballs that collect in longer fur.

Most of us who spend time in the backcountry with dogs have an emergency first-aid kit that includes items to staple and disinfect wounds, cut or clamp off bleeding, and wash out eyes. The kit expands over time to include pain reliever, hemostats, thermometer, nail clippers, styptic powder and other things — I like to take one of those super-absorbent drying towels to dry them off in the field if needed.

In trips that include Boss, I take a stainless-steel water dish that fills up half my day pack because, despite our best efforts, he is proof that dogs may not be human, but we have to take extra care of them because they are not completely wild either.