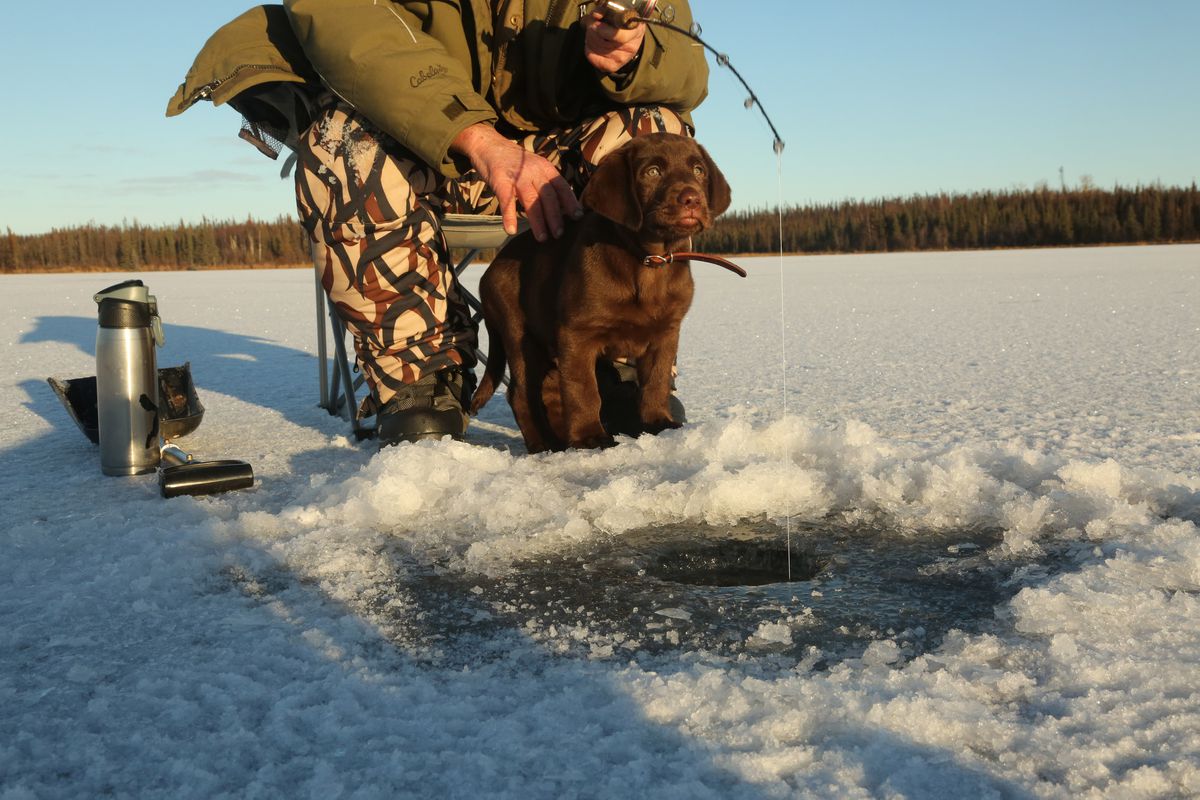 Rigby proves to be a born fisherman and an excellent diversion. (Photo by Christine Cunningham)

Rigby proves to be a born fisherman and an excellent diversion. (Photo by Christine Cunningham)

Perfection, it seems, is as much individual perception as anything. Saying the morning was perfect, as we walked across the frozen lake, sleds loaded with gear, might be a stretch for some folks.

Nevertheless, when a windstorm out of the northeast dies overnight and the faint glow of stars is fading with the gathering light and the temperature is just below freezing, either it’s perfect or so close it doesn’t matter.

Drilling the first hole, the location chosen from years of triangulation of trees and points along the lakeshore, furthered the magnificent morning with a break-through to water at only about 10 inches.

Running a hand auger, that’s a gift. The second hole was just as easy. The third, a way away to hedge my bets on where the fish would be, was finished before Christine had her ice shanty erected.

A quick sweep of the holes with the perforated ladle and the clearing of shaved ice and snow with a lightweight mountaineering shovel, and we were ready. Maybe too soon, I thought; the holes hadn’t had time to settle properly.

I dawdled a bit getting my camp chair set at just the right distance from the ice hole, and then I poured the coffee into the insulated cup and set it on the ice within easy reach. Clipping the one-ounce silver Syclops fishing lure onto the snap swivel, I settled into my chair, lowered the lure just below the surface of the water and set the rod down.

Almost ready, I smiled to myself as I reached in my shirt pocket for the pack of cigarettes that wasn’t there. Uh oh.

I’ve never been superstitious. Friday the 13th, black cats, bananas on a boat, throwing your cowboy hat on the bed — that sort of thing never meant much outside of the seemingly silly things folks do to avoid them. Like no 13th floor in a hotel.

But ritual, tradition and just “the way it ought to be,” well those are different things. The hunting and fishing world is rife with rituals.

Perhaps in my case, as Christine suggests, ritual, tradition and personal rules are almost interchangeable. She has grown accustomed to and even adopted some of the peculiarities that drive my way of doing things. But it took some time.

On a fall day, years ago and early in Christine’s hunting life, Winchester was coursing the alder-choked slopes we passed through on our way to hunt whitetail ptarmigan. Presently he locked up on point, his nose breathing in bird scent from an alder patch.

Christine broke open her shotgun and dropped two shells into the breech, preparing to move in and flush the birds.

“You can flush them, but don’t shoot them,” I said.

Looking at me as if I had grown a second head, she asked, “What are you talking about?”

“How do you know they are willows?”

“Whitetails don’t hang out at this low elevation.”

Plucking the shells from her shotgun, she flushed the willow ptarmigans and we went on the have a terrific day hunting whitetails.

“So,” she said later, “not shooting those willows is along the same line as taking only 10 shells, wearing cowboy boots past snowfall, or not following up the smart birds that get away — your personal rules?”

I feel comfortable saying that most hunters and fishermen have similar ways of doing things that might not make sense on the surface but are a significant part of their experience. I had a buddy who had an old hunting coat that eventually became so ratted and torn and smelled so bad that it ceased to serve any useful purpose. He was terrified to get a new one. It was like a security blanket.

The way we feel about things, rather than rational thought, drives the way we go about our outdoor activities. This personal code manifests itself for me more often than I care to admit. Those sure things that come your way in the hunting and fishing world are nightmares for me. To the degree that when something too easy pops up, Christine suggests we pass.

“You can’t do it that way, and you know it, you’ll think it into failure before we even start,” she’ll say.

So, when I reached for the cigarette and it wasn’t there, my heart did a bit of a flutter and I thought, well, so much for catching fish. The lighting of a smoke just before dropping the lure to the bottom had been a part of ice fishing for as long as I remember. Without it I convinced myself I would not be catching fish.

But it was turning into the kind of day you mostly hope for and rarely get. No wind, sun with some warmth, temperatures warm enough that skim ice didn’t form in the hole if you stopped jigging for a few minutes, and then Rigby popped out of Christine’s ice shanty and charged in the funny way only puppies can run, across the ice to me.

His assistance was a welcome distraction from not catching fish. Meanwhile, periodically Christine would shout, “Fish on!” Rigby and I would run over to lend assistance and admire each rainbow she brought up from the depths.

A bit perplexed by my lack of catching fish, Christine suggested I was just off the feed line. No, I said, and explained the problem.

“Well, I hope you can get past it; otherwise, your fish-catching days are going to be a distant memory,” she said.

Off we went, his short puppy legs doing double time, but he kept up, and we played like kids.

On the way back, it occurred to me we were building the rituals and traditions that Rigby would come to find as comfort food, just as we do.

As we approached Christine’s shanty, she appeared with yet another fish, the biggest of the day. Alert to the thrashing of the fish, Rigby ran and wrestled it down between his oversized puppy paws.

Christine said she had enough for one day, but I told her I thought maybe my thinking had come around and I would give it one more shot.

A few minutes later, with Rigby supervising between my feet, we hooked our first fish of the day. Not a bad way, I thought, to lose one ritual and replace it with another.

Steve Meyer is a longtime Alaskan and outdoorsman who lives in Kenai.