Even in winter, the outdoors is giving Alaskans a break from pandemic restrictions 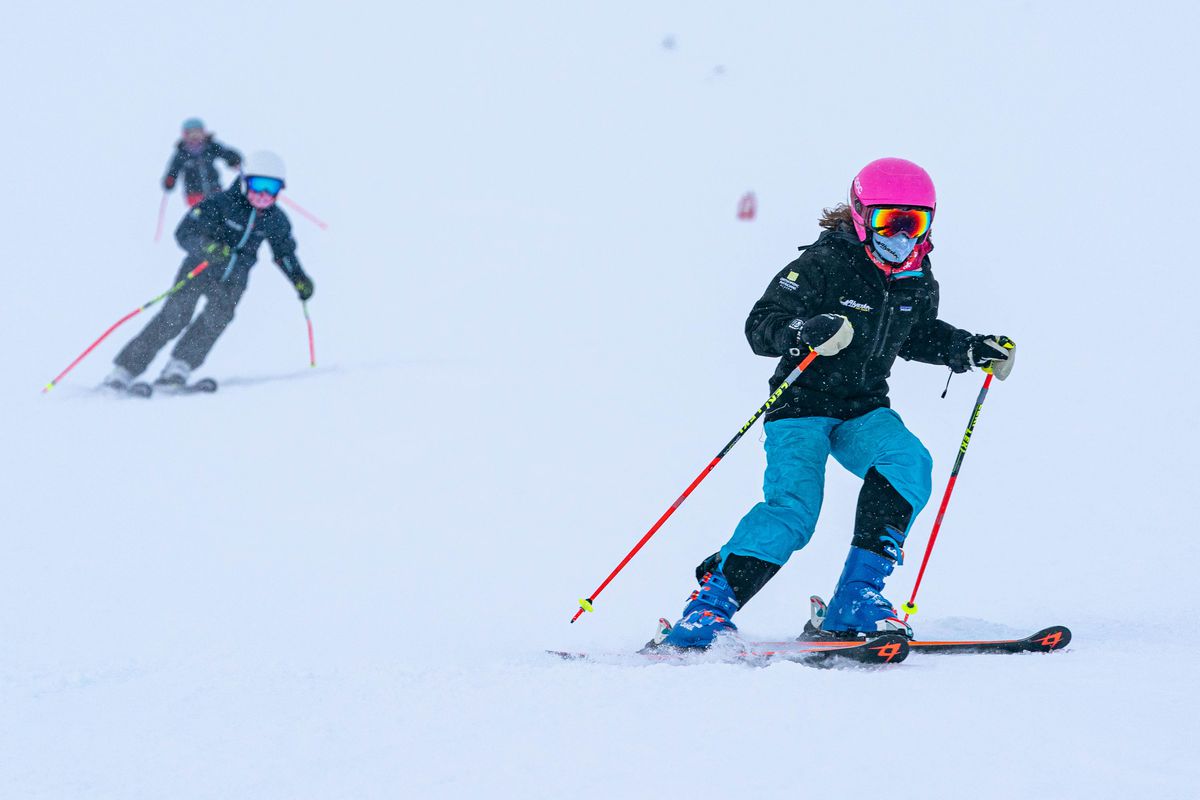 People wear masks while skiing at Alyeska Resort on opening day, Friday, Dec. 18, 2020 in Girdwood. The resort requires masks to be worn while in lift lines, while riding the chairlift, and all public spaces, but allows them to be removed while skiing on the mountain away from other people. (Loren Holmes / ADN)

People wear masks while skiing at Alyeska Resort on opening day, Friday, Dec. 18, 2020 in Girdwood. The resort requires masks to be worn while in lift lines, while riding the chairlift, and all public spaces, but allows them to be removed while skiing on the mountain away from other people. (Loren Holmes / ADN)

As Joey Caterinichio skied along the Kincaid Park trails in West Anchorage recently, she saw dozens of new faces.

Caterinichio, who has been skiing in Alaska for more than 25 years and now is president of the board of the Nordic Skiing Association of Anchorage, said one silver lining to the pandemic has been that more people are getting active.

“I feel like more diverse groups are outside,” she said. “I love that the utilization is not just the advanced groups anymore. I see beginners and intermediates and families of all different types, utilizing the trails, hiking and getting active.”

During the early months of the pandemic, state parks saw an unprecedented increase in usage by Alaskans. As seasonal darkness arrived, Caterinichio said, she was encouraged that Alaskans remained active by skiing, fat-tire biking and snowshoeing.

On the relatively easy Mize Loop at Kincaid, the municipality’s trail counter is ticking toward an expected 8,900 skiers by the end of this month, officials estimate. Just 3,271 skiers were recorded last December.

Caterinichio said ski association membership has also grown this year, with 1,687 now compared with 1,214 at this time last year.

A post shared by Anchorage Parks and Recreation (@anchorageparksandrec)

Part of the increase could be tied to this year’s favorable weather, said Dana Drummond, who manages The Hoarding Marmot gear shop in Spenard.

“We’ve just been having such a good early winter,” he said. “It got cold early, but we also got snow and we haven’t really had that much in the way of warmup,” he said. “It’s really been nice and pretty inspiring.”

The uptick in winter recreating has also led to an increase in gear purchases, with some skiers having difficulty figuring out how and where to get equipment.

Drummond said his store is seeing a steady flow of used gear coming in, but it’s leaving quickly.

“We keep getting a pretty good steady supply so we can, I don’t like to say limp along, but when somebody comes in, it’s a really kind of a magic moment when we have all the perfect items for somebody that they’re looking for,” he said.

Drummond said he enjoys helping people connect with resources to learn new skills or how to be safe outdoors. He noted that avalanche courses and lessons are still happening because businesses and guides have adapted during the pandemic to teaching smaller classes, and social distancing is easier outside.

“We’ve moved into our fat bike season and people seem to be buying fat-tire bikes and winter equipment faster and earlier than we typically see,” he said.

The continued increase in demand has meant that it’s sometimes challenging to keep enough bikes and winter accessories stocked, Carman said. Most Anchorage businesses that sell outdoor gear are facing the same challenges, he said.

“I think it has something to do with manufacturing, but in most cases the simple story is that demand has been so high for a period of months now, that the demand is just simply outpacing manufacturing,” he said.

The key, Carman said, is patience. He said they’re always able to help find gear for customers, but it is sometimes just taking a little longer.

“With more fat bikes out there actually actively using the trails, it means the trails get better used and smoother and faster and just a little bit more fun for the average rider,” he said. “So as the trails get more fun and more accessible, I think we’ll see more people interested in doing it.”

With exercise shown to help ease depression and anxiety, Caterinichio said, outdoor activity is necessary for many Alaskans in coping with the pandemic and short daylight hours. Being outdoors also provides a safe way to do an activity with others while keeping socially distant.

“I do think that this pandemic has been awful in a lot of ways, especially for anybody who’s lost anyone or been sick, but the positive part of it I think is that it’s brought families together and slowed life down a little bit,” she said. “Instead of just watching it go by, I think people have utilized the outdoors to help deal with it.”

Caterinichio said she believes people will continue to stay active long after the pandemic ends.

“Just exercise in general I believe has allowed people to weather this and will get them through till the end of it,” she said, “and then hopefully this lifestyle continues because that’s what makes a happy and healthy city and community. Get out there and enjoy it.”