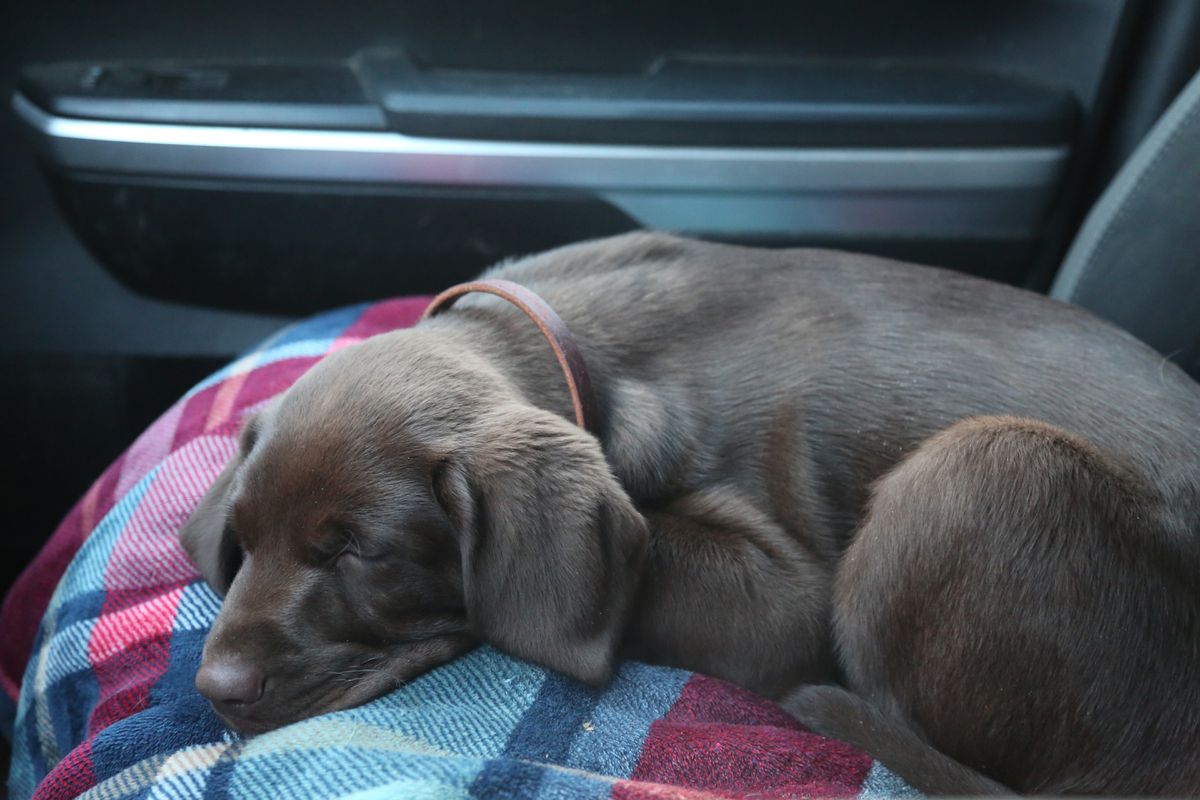 “You know, I’m doing this just for you,” I said to Rigby, the chocolate lump of joy perched on the center console of the truck.

He gave me a sidelong glance, a moment of distraction from his focus on the crows swooping low across the highway, dodging traffic while ever-searching for handouts.

“It’s the winter solstice, and proper hunting dogs must adventure on this glorious day. You don’t know this yet, but the sun will start climbing, we’ll have more daylight to play in, and before you know it, the skies will fill with the birds you were born for.”

The crows had flown out of sight when I glanced to my sidekick, who was staring at me with the unfettered adoration that seems can only be had in the company of puppies.

Rigby didn’t much care where we went. Puppies grow into dogs and never lose that endearing quality of children where they just want to be with you. Since Rigby joined the family when he was five weeks old, to now, at 12 weeks, he has barely been out of my sight.

He is, however, much easier to see these days. At 34 pounds, his puppy days are going to be in the rearview mirror before we know it.

We started up the old trail around 11 a.m., the light subdued by low clouds that promised the storm forecast for late afternoon. I had gambled a bit, hoping someone had gone down the trail recently and made it passable without snowshoes. Rigby is still learning the ropes of walking with his people and has not yet mastered staying out from underfoot, which tends to be a bit problematic when one is wearing snowshoes.

We lucked out. There were two sets of tracks on the trail, made the day before and covered with an inch or so of snow.

Off we went, and as Rigby left his impressions in the snow, I wondered if someone seeing them would think they came from a big dog. His front Labrador paws are huge, and when spread in snow appear much bigger than his size would suggest.

“People will think a wolf came through here, buddy,” I told him.

Rigby romped along the trail, never more than 20 yards or so ahead of me, always turning to reassure himself of my presence. He would go off the edge and stick his nose in the snow and run like hell, his butt up in the air like a hound dog, trying to catch the elusive creature that made the wonderful smell under the white blanket.

The voles were a bit too fast for him.

The old trail leads to a series of small- to medium-sized lakes connected by shallow canals, which cannot be seen on a map or Google Earth. The first lake began to appear through the trees ahead when Rigby stopped and pawed through the snow near the base of a small spruce tree. He was intent on digging up whatever he smelled, and I went over for a closer look.

A spruce grouse toilet. The pile of greenish colored oblong pellets evidenced that a grouse had roosted in the tree at one time and, as they do, defecated multiple times. The side-by-side shotgun, broke open and draped over my shoulder, stayed parked. We wouldn’t be shooting grouse today, the gun was purely for Rigby to associate it with adventure and fun.

After a bit more digging, I told him “no bird” and pulled him back to the trail. Off he ran, taking on the big new world like a champ. Then he stopped, his ears perked up, and he ran back to me. He turned around facing up the trail and sat between my feet, looking ahead.

A few moments later a man on snowshoes appeared from around a bend in the trail, maybe 20 yards from us. I could feel Rigby’s tail wagging between my feet as the man came closer. Rigby loves people.

At about 10 yards, the man dropped to one knee, and I could see an ice auger jutting from the top of his rucksack.

Having taken a moment to measure this fellow and deciding he meant us no harm, I said, “Name’s Rigby, he’ll come if you call him.”

He did, and Rigby ran to him, gave him a good face-washing and all but squealed in delight at the rubbing and fussing the old stranger gave him.

I had guessed the fellow to be within a few years either side of my age. Old enough to have seen maybe more of life than he ever expected. When he looked up from Rigby, his eyes glistening, and asked if it was OK to give the dog a treat, I knew. I had seen that look many times, in the mirror.

“It’s a habit,” he said as he fished in his pocket and produced a small dog biscuit, which Rigby devoured like a starving wolverine.

“You must have come from the southwest,” I said.

“Yep; you know that route?”

“Catch them by the beaver house?” I asked.

He looked at me for a moment and said, “If you know about the beaver house, you’ve been coming here a long time.”

The beaver house, set on the lake’s eastern shore, had been abandoned many years ago. Eventually, the lodge broke down and slid off into the lake. You would have had to have seen the beaver lodge to know it was ever there or know the great fishing the hole below it exhibited.

“My wife dropped me off at the other end,” he said. “I planned to make the circuit and catch a few fish and build a small fire to have my lunch by before I head back to meet her. I have an extra sandwich, and I’ll bet this youngster would love to relieve me of the burden.”

Before long Rigby danced around the fire, trying to catch the spruce sparks that popped. Once the food came out, he settled in the stranger’s lap and ate the extra sandwich while we small-talked and watched the fire die.

His eyes welled up and his voice stumbled when he said, “I lost Jake two years ago. Best damn dog I’ve ever had.”

He stood with his pack and said, “I best get going, don’t want to scare the wife,” as he bent to hug Rigby.

As he walked away, I said “hey.” He turned, and for the first time in a long time I said to a stranger, with no reservation, “Merry Christmas.”

“Merry Christmas,” he said, “and thank you, Rigby.”