To sleep, perchance to fish — but where? A fancy shanty, or a no-frills hut? 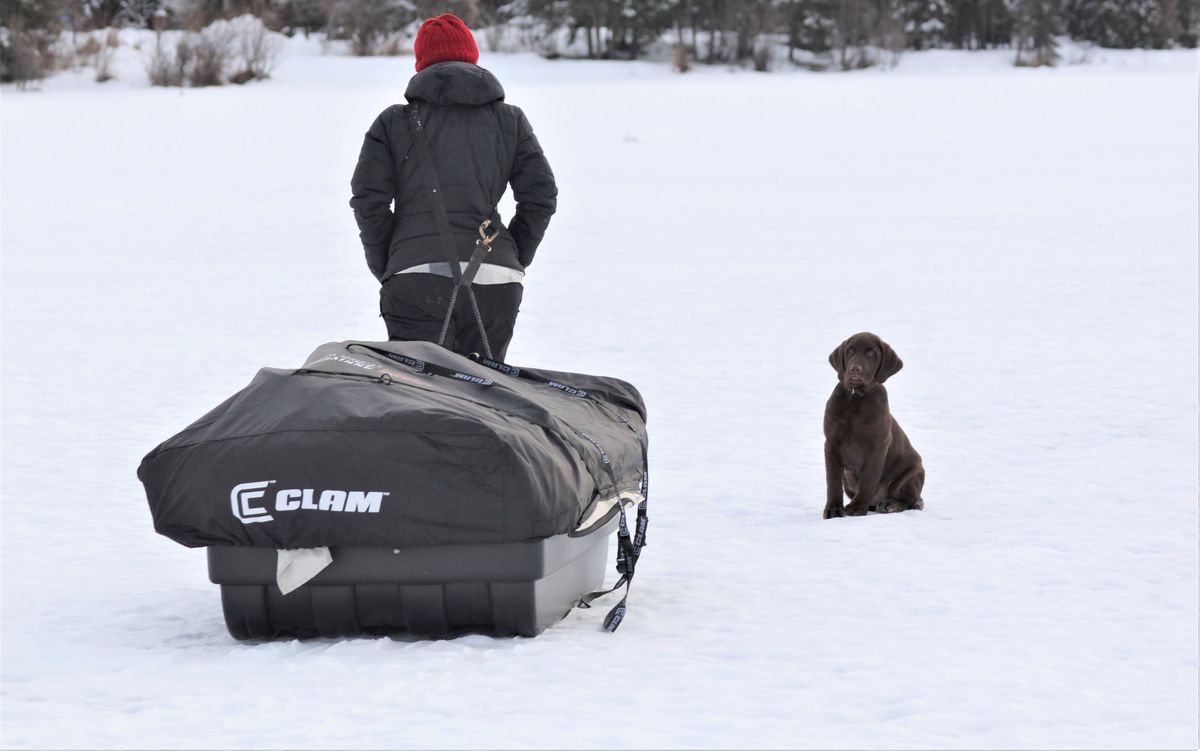 Whenever anyone makes fun of me for spending a day inside my green ice fishing shanty, it warms my heart when Steve jumps to my defense.

Even though he does not subscribe to the idea of going outside to sit inside, he will not rob me of my measure of success found fishing from within a hut.

“She’ll go to sleep in that thing,” he says. “I’ve peeked in the windows before, and she’ll be sawing logs.”

I can suffer the accusations of the damned and not betray my desire to fall asleep while fishing to my heart’s delight.

“She doesn’t change lures, either,” he says. “Fishes with the same one no matter the fish or the lake or the conditions.”

True. All of it. I like my favorite lure, Old Red. I stopped carrying other lures years ago because I’d never switch, even in a pinch.

One day, Steve and I had fished for four hours without a bite. The wind was blowing outside my green hut, and Steve looked miserable clamped to his camp chair in a parka. I could see that he’d tried every lure in his tackle box and drilled about 10 holes in the vicinity.

I figured I didn’t need to change lures because he was already testing every other variable. Theoretically, if he found one that worked, I could switch to it. But, as many times as that has happened, I still don’t change lures.

Perhaps it’s hard-headed superstition that makes me feel compelled to stick with Old Faithful. If you give up right before a thing might have worked, you will never know if it could have.

It wasn’t long before I found a way to lay across my camp chair with my head against the wall that gave me perfect reading light by the cut-away window.

When my eyes got heavy from reading, I set the open book on my face, which provided a nice sleep mask.

And if it weren’t for that nap, Steve could not tell everyone who we have ice fished with since, “She once caught the only fish of the day while sleeping in that thing.” It was a nice rainbow trout.

I remember feeling a tug on my line and falling out of my chair onto the ice. I wrestled the rod into my hands and fought the fish. It was a fighter, too.

When I unzipped my door flap with the fish still attached to my lure, I didn’t know the text from my book appeared stamped across my face. “You won’t believe it,” I said. “I hooked this fish while I was asleep!”

Steve looked at me from underneath the ruff of his parka, a lovely mist of snow blowing 20 mph across the lake, his line frozen stiff in a dime-size opening in the ice.

The shanty allowed me to spend a day ice fishing when I might have otherwise given up because of weather — frustrated by cold hands, ice forming on my line, and the inability to read or take a nap in relative comfort.

My old green pop-up fishing shanty broke down this season. I had purchased it used from Trustworthy Hardware about 12 years ago, and it already had replacement rods. Those rods would get replaced again, and I used up a roll of green duct tape to match the fabric repairing holes.

It did not smell great — an authentic mix of fish slime and mildew. But I’d grown attached to it, like a favorite coat or hat. Other people could think the object of my affection was tattered, ugly or stinky. I didn’t care.

We’d had good times together. Once, a gust of wind flipped my tent, and I grabbed the bottom edge as air filled the inside like a sail. Soon, I was speeding across the slick surface of the lake, holding on over Steve’s shouts of “Let go, Let go!”

It was so much fun until I fell face-down on the ice and still didn’t let go as my shanty plowed us into overflow. I was soaked but laughing. I didn’t want to lose my beloved shack or see it mangled against a tree.

It was about 25 pounds and easy to haul the miles back to good fishing lakes, and I wish I’d kept track of all the places it had been.

This season, I punched in one hole too many. Time and use had so worn the fabric that light came in through the broken-down weave. It was beyond repair.

The manufacturer doesn’t make this particular shelter in green anymore. I had picked it out without much experience — I just wanted an affordable wind block and indoor space for my heater.

I’m not sure why I decided to upgrade from a pop-up to a flip-over, but I had time to shop and consider all the options and features I never knew existed when I got my first shanty.

I ended up purchasing a monster-size tub shanty that weighs over 110 pounds. I could probably pull it a half-mile, maybe. I liked the idea of a shelter built on a sled that you could just flip over your head for ease of mobility, and the white fabric would let in more light than darker colors.

It had so many features — honey-comb quilted thermal fabric, cushioned boat seats on sliders so you could go back and forth. Pockets, coat hooks, rod holders. It even had a little flag I could put on top so others could see me.

On my first day on the ice, I looked around my upgraded surroundings, enjoying that new shanty smell. But it was almost too nice. I missed my old pop-up.

At 12 weeks old, Rigby, our chocolate Lab, climbed up on the other captain’s chair, and the two of us looked out chalet-style windows to the lake. My co-pilot seemed to like it. Maybe he could help me pull it when he grows up.

A few days later, I purchased a new version of my old shanty with all of the original lack of features. The only difference was that it was red instead of green and a fraction of the fancy white monster’s price. Sometimes you get it right the first time.