At a quiet cabin in Alaska, all is calm — if not completely silent — for a dog easily spooked by fireworks 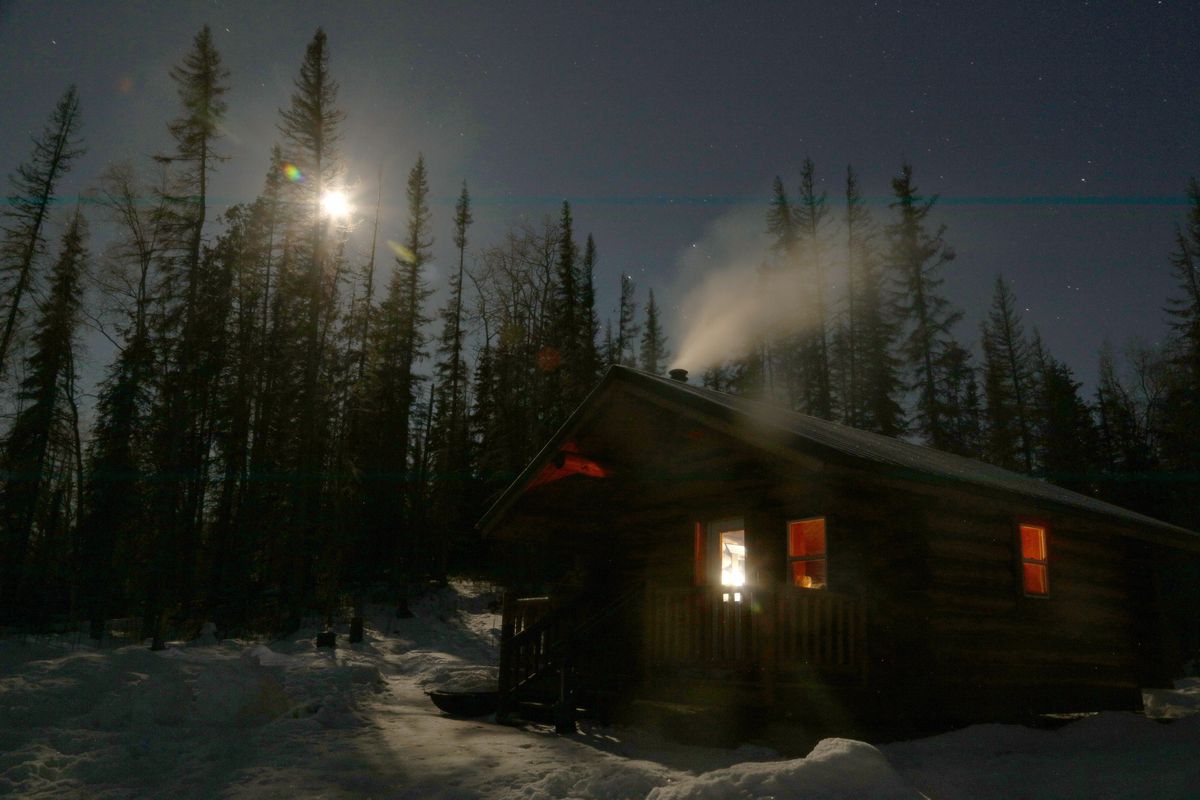 New Year’s hasn’t held much appeal for Christine or me since the close of waterfowl season changed from Dec. 31 to Dec. 15.

Our traditional waterfowl hunts on Christmas Eve, Christmas Day and New Year’s Eve were the best of times. I am not sure, but I don’t remember ever taking more than one or two ducks, and most often we didn’t shoot any.

Being in a favorite place, now a tapestry of white, black, blue and gray, and getting cold while the Labs whined and wagged their tails for an opportunity to retrieve from frigid water was reason enough.

Sitting in the aftermath in front of the wood stove — its warmth like no other, penetrating to our chilled cores — and cleaning the shotguns while supper heated capped a perfect day for us.

Since the regulation change, we have attempted to find new traditions to follow those voided in the process. Of course, with grouse and ptarmigan season remaining open, the void may have filled with that, but from mid-November to mid-January we tend to leave the upland birds alone. They are settling in, hunkering down for the coming snows, and while our choice probably makes little difference, it is how we feel about it.

We don’t attend too many parties or entertain much. A house filled with large hunting dogs prevents it. Despite their blue-blood lineage, they don’t comport to some of the social graces. Sneaking behind and peeing on a guest’s leg comes to mind.

[There are no bad dogs, just untrained or neglected ones]

Never mind that we rarely do anything without including one or two dogs. They all want to go, all the time, so we do the best we can to get them out for some sort of adventure.

Last year we found that leaving Colt, one of our English setters, at home on New Year’s Eve had us returning to the sweet pup hiding under a bench in the shop, terrified by the fireworks.

A few days before New Year’s, while exchanging holiday pleasantries via email with our Daily News editor, Beth Bragg, she mentioned she hoped we could get Colt away from the fireworks for New Year’s. That’s when the solution that had lingered in the deep recesses of my mind surfaced.

Colt and Rigby led the way on the hike to the cabin situated on a lakeshore in the Kenai National Wildlife Refuge, where no power equipment is allowed, including chain saws, power augers or snowmachines.

Halfway to the cabin, even the sounds of light traffic along the remote road where we parked disappeared.

Later, after cooking the obligatory steaks, of which Rigby and Colt had more than a fair share before retiring to blankets on the floor, Christine and I were reading by candlelight.

“Do you hear that?” she asked.

I don’t hear so well, and the crackling of spruce in the wood stove, the occasional murmur from the lake as the ice contracted with the temperature drop, and Rigby’s snoring were all I could hear, and I told her so.

“Everything I hear is pleasant and peaceful, especially my thoughts,” she said.

Sometimes people will say they venture to places outside the boundaries of civil progress — mountaintops, remote rivers, the deep forest or a hidden cabin on a lake — for the silence. Perhaps it is simply an easy way of describing a perception, because there is no silence. Sounds come from the breeze in the leaves, the soft patter of wet snowflakes on ice, an owl hooting, a wolf howling, a ptarmigan clucking.

The quiet of special places is not silence; rather it is the absence of annoying sounds. I have chewed on this a fair amount over the years, and wondered why, at times, even those pleasant sounds, on some days, might be annoying.

When Christine commented about her thoughts, it became clear how much our perception of sounds is driven by our life experience, our culture, our beliefs, and our feelings at that moment.

I thought about the sound I had hoped for during the night — wolves howling — and a conversation I had with folks who had been on a float trip who heard wolves howling near their camp one night. It terrified them, and they feared the wolves would find and attack them.

On a trip into the Brooks Range a few years back, Christine and I heard wolves near our camp. We were delighted and hoped they would come close and that we might witness them hunting the caribou. Our experience with wolves has left us with nothing to fear, their voice is the true sound of wilderness.

Christine and I went back to reading, the candlelight strangely soothing to our eyes, which normally are strained and dry by 8 p.m. I read Gene Hill, a favorite outdoor writer. He is eminently quotable, and I read a passage for Christine. She responded by saying I should read her and the boys a Gene Hill story.

At home, it would never have occurred to either of us, but out in the cabin in the woods, it seemed necessary. After a few moments, Colt and Rigby lifted their heads off their beds and stared at me as if they understood what I was saying. Dogs love to listen to their people’s voices, a sentiment confirmed by the periodic thump of their tails on the cabin floor.

Christine retired before midnight, and the boys and I would doze for brief periods, and then we would go outside to listen for wolves or coyotes. We never heard any. Midnight came and went, with just a faint hint of fireworks noise off in the distance.

A gray owl hooted at us from a nearby tree around 3 a.m. Colt and Rigby stared intently but we never saw the big bird, and they didn’t bark. Without too much anthropomorphizing, it seemed the unusual noise, to them, didn’t provoke thoughts of fear or distress.

I often wonder why a noisy, crowded bar has appeal to so many people. Now I think maybe I understand — it’s more about being somewhere that relieves one’s mind of the day-in, day-out stresses of the modern world. Some find it at parties, some at bars, or with family, or most anywhere that their thoughts make it enjoyable.

While it didn’t take the place of duck hunting, and it wasn’t silent, Colt had a wonderful and peaceful night — well, except for Rigby’s relentless attempts to play. A good start to 2021.