Alaska can taunt you with darkness and bad weather — but for so many of us, we can’t quit it 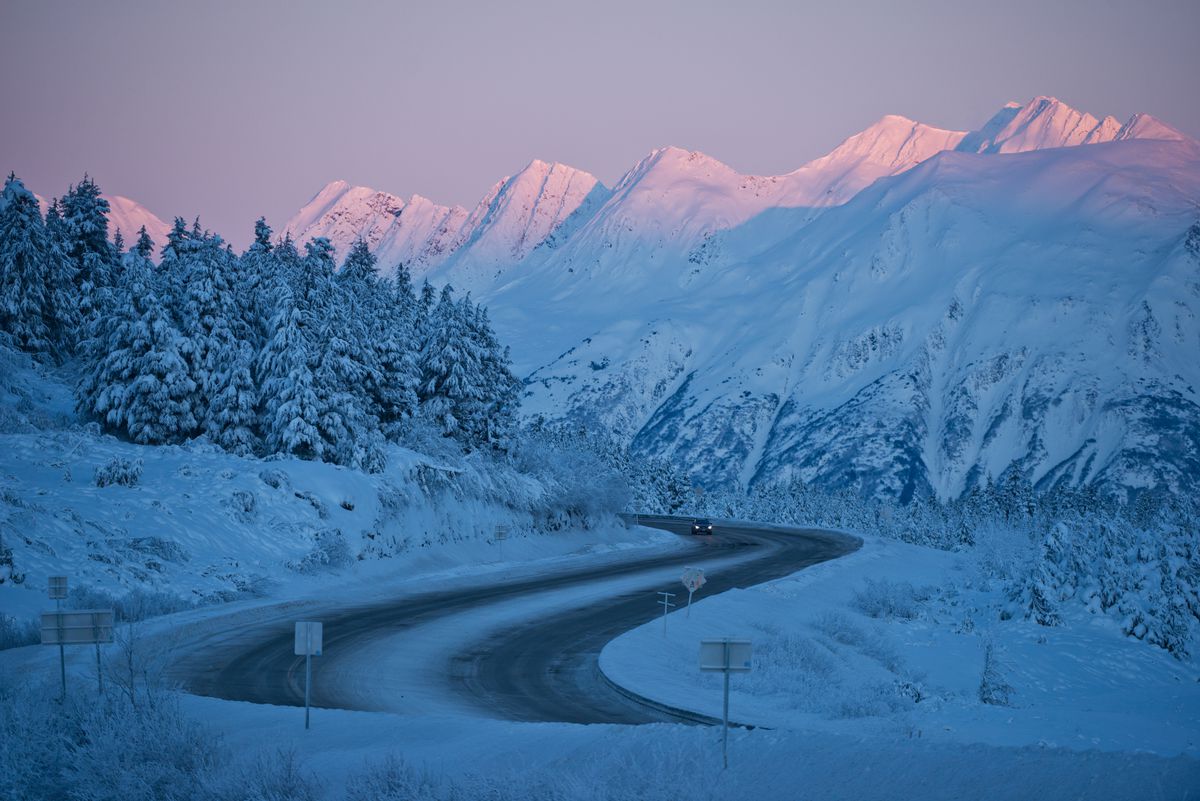 Peaks near Turnagain Pass catch the last bit of afternoon sunlight as a car heads southbound on the Seward Highway on Thursday, December 22, 2016. (Marc Lester / ADN)

Peaks near Turnagain Pass catch the last bit of afternoon sunlight as a car heads southbound on the Seward Highway on Thursday, December 22, 2016. (Marc Lester / ADN)

He’s a drag. Rains on me in December. Repeatedly. Then withholds sun for an entire summer with the exception of two glorious days ... in the middle of my work week.

But one day there is an epic pink alpenglow after days of dense winter fog, lighting up the mountains. I pull the car over to gaze at it. Or there’s one of those technicolor green almost-hurts-my-eyes late spring hikes, when the trees finally burst. Or one fall afternoon with the air cool and electric as the final gasp of life explodes in color and blueberries are in the alpine for miles.

Alaska shows up with flowers and asks me to take him back. Since I’m so dazzled by and grateful for the beauty, I momentarily forget about the rain. I say yes.

I once left the state for a while.

At the time I’d gone through five winters. The first one was dazzling. I found everything charming and intriguing, from the hoar frost rendering the Coastal Trail into a never-ending snow globe to Northern Lights Boulevard in the mid-morning, pitch-black darkness. I was not discerning in finding beauty in extremes.

The second winter, I knew what to expect and had access to more toys and connections to get outside in different ways. The novelty held.

But the winters after that felt more normal, and that’s when the sads set in.

Somehow, the mid-morning night sky was no longer fascinating but claustrophobic. I felt trapped in the long darknesses of the day and night, trapped in all my layers of clothing. I sometimes sat directly in the low winter sun so I could feel vitamin D sinking into my skin (P.S. — that’s not how it works, not at this latitude anyway).

I noticed that winters brought my mood way down. I reacted more easily and deeply to anything that hurt or even rubbed me the wrong way. I was sluggish.

I was sad when I left because it’s Alaska, but also OK.

Then a funny thing happened.

That next winter, in the high desert in the Lower 48 with cool temperatures but all the sunshine a girl could ask for, I found myself thinking about Alaska.

(What’s he doing right now? Is he seeing someone else? Is she getting to see the alpenglow; the hoar frost? What am I missing?! Oh, darn, his social media tells me there was an epic snowfall. Maybe I should have stayed.)

I thought about all those times I ski-commuted to work. What an amazing place, Alaska, where that’s even possible. I remembered the inverted tunnel feeling of the glowing Chester Creek corridor surrounded by darkness everywhere else. The snow held beautiful patterns, mostly of skate ski tracks (this was before the fat bike revolution really set in).

I remembered feeling like I was getting away with something. It was a little like being superwoman — at the end of the day, I transformed from my Normal Human Office Costume to my Skate-Ski Commuter Spandex. Then I flew home.

That’s how I imagined myself, anyway. I’ve never been very coordinated on skate skis and I probably fell a lot.

There were more memories. Ice skating with friends on hot-mopped urban ice and wild ice. The feeling of minus-20 when the inside of my nose freezes when I inhale and my eyelashes get frosty white. The aurora.

I sat in sunny Reno, Nevada, and dreamed about these things, and I laughed at myself because in this case it wasn’t the grass being greener. It was more frigid, extreme and dark. I missed it.

I missed who I was in that frigid, extreme, dark place: someone who could survive and, most of the time, thrive. Alaska posed a daily challenge for me to face myself and create the best I could given my circumstances. This is not something warmer, kinder climates necessarily require of people.

Now, in COVID times, I’m torn between wishing I could leave the state for a while and being grateful I get to stay as long as I do. On the one hand, I’d leave the state for a sunny beach somewhere in a heartbeat, if viable. On the other, this is the longest focused Alaska time I have had in a long time. I’m enjoying getting to see who I am within this.

Sometimes it rains. Other days bring beautiful, fat flakes of snow. The cold sets in and I add so many layers to go outside that I feel stiff. Then it’s 40 degrees in my neighborhood.

Alaska is still doing its bad boyfriend thing. I give it a break, because climate change. I notice when it’s bad out there, and it still impacts my mood. But I also notice more fully when it’s beautiful, because it is, and I’m lucky to be here.