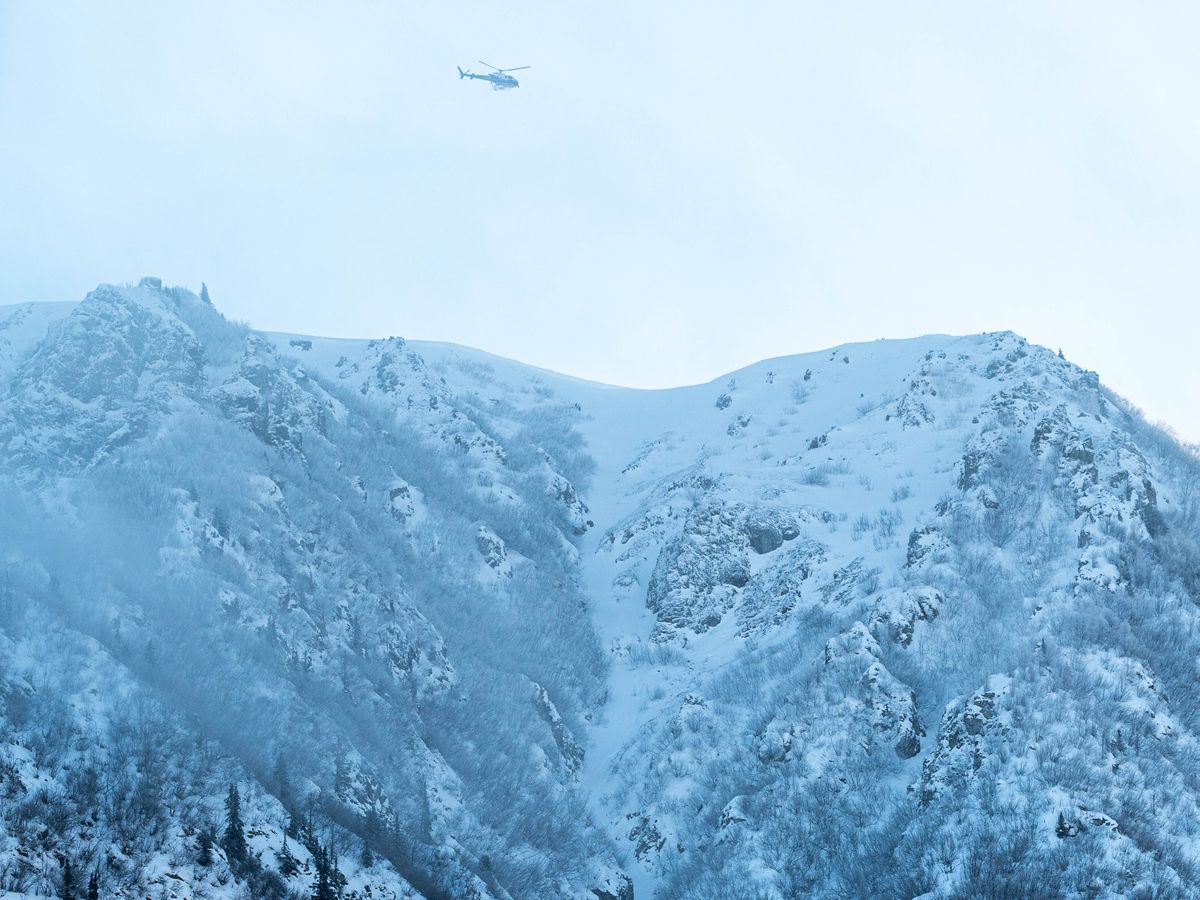 Three men were climbing a challenging portion of Bear Mountain near Chugiak on Tuesday when they likely triggered a wind slab avalanche that partially buried and killed them, according to a preliminary report from the Chugach National Forest Avalanche Information Center.

On Tuesday morning, 54-year-old Thomas Devine of Chugiak, 43-year-old Matthew Nyman of Denver, Colorado, and 50-year-old Edward Watson of Miami, Florida, began to hike toward the northern face of the mountain, which lies in Chugach State Park near Mirror Lake and Peters Creek. A relatively popular hiking destination, Bear Point sits on the south side of the mountain, but the northern face is much steeper and more technical, according to Wendy Wagner, director of the avalanche center.

The men were all wearing harnesses and crampons and carried ice axes with them during the climb, the report said. They were not wearing helmets, personal locator beacons, which would have allowed them to send out a distress signal to search and rescue groups, or an avalanche beacon, which would have enabled them to find one another had one person remained out of the slide.

The men were due at the trailhead parking lot around 5 p.m., according to Alaska State Troopers spokesman Austin McDaniel. When they didn’t arrive for the planned pickup, family members became concerned and the men were were called in as missing at around 10:30 p.m. to the Alaska Rescue Coordination Center.

One of Devine’s friends walked toward the base of the gully that night to search for them, but turned around because it was dark and lightly snowing, the report said. He then hiked up the Bear Point trail to peer into the gully from above but could not see anyone according to the report.

Search teams from the Alaska Mountain Rescue Group headed to the area around 5 a.m. Wednesday. The crews found the three men partially buried in debris at the base of the gully, the report said. By 4 p.m. rescuers had extricated all three men from the area, the report said.

Specialists from the rescue group and avalanche center hiked to the top of the gully on Thursday to investigate the snowpack, the report said. Troopers were also able to fly over the area to take photos of the starting zone.

Avalanche specialists determined there was a “variably thick knife-hard wind slab sitting on top of a layer of weak, faceted grains and depth hoar at the base of the snowpack,” the report said. On Monday, the area saw strong winds for much of the day. A nearby weather station recorded sustained northerly winds of 30-50 mph and gusts up to 65 mph for nearly the entire day, the report said.

The heavy winds likely contributed to the wind slab, which the report estimated to be about 3 inches to 10 inches thick across the start of the slide. The report said boot penetration is believed to have triggered the avalanche.

The accident comes as a harsh loss to the Alaska outdoor community, said Jayme Mack Fuller, who served with Devine on a committee.

Devine was extremely active within the community and served on the Board of Directors for the Mountaineering Club of Alaska. He also worked with Mack Fuller to create the Alaska Ice Climbing Festival in 2009, she said.

“Tom is definitely embedded in the outdoor community, especially in Southcentral Alaska,” she said.

Through their work with the ice climbing festival, Mack Fuller said Devine’s passion not only for the outdoors was evident, but also his unconditional love for his wife and three daughters.

“I think his passion for his kids was just to have different opportunities to try different activities — whether it was dance, or the science fair or ice climbing,” she said. Mack Fuller remembered how excited he was to watch his daughters participate in one of the climbing festival’s beginner clinics.

Devine had summited peaks around the world, she said. According to a story published in the Alaska Star in 2010, Devine completed Denali, Rainier and Iztaccihuatl in Mexico. Mack Fuller said he was also a Marine veteran.

“He fought to be healed from the loss of a leg and no use of his other foot, in addition to a traumatic brain injury, to be able to walk again, climb mountains and work for the government,” Crichton said over email Thursday. The couple met while Nyman was in graduate school and they married in September 2020.

Nyman was a dedicated father to his two sons in Colorado Springs and to his stepson, Crichton said. He most recently was the Cyber Fusion Center director for American Family Insurance. He was featured in a documentary released in 2012 that followed 11 veterans as they climbed the Himalayan Mount LoBuche. Nyman served in both Iraq and Afghanistan.

Crichton said Nyman and Devine had been introduced by a mutual friend.

While avalanches are common throughout Alaska, this is the first time in many years that a single event claimed so many lives, said Wagner of the avalanche center.

Officials were not aware of any other recent activity on Bear Mountain, said McDaniel of the state troopers, but the agency warned hikers to avoid the area now because of a continued slide risk.

“Avalanches are common along the Chugach Mountains and we encourage anyone recreating near mountains during the winter to always tell someone where you are going, when you will be returning, check avalanche and weather conditions before departure, and to carry an avalanche beacon with your emergency gear,” McDaniel said.

Troopers have performed several search and rescue missions on the mountain in the past few years, but McDaniel said people were able to self-rescue in each of those cases.

Mack Fuller said she has been reassured to see the community rally around Devine’s family. He was the sole financial provider and an online fundraiser had garnered more than $30,000 in donations to help his wife and daughters by Friday evening.

Tragedies in the outdoor community shake even those who did not know the people involved, said Mack Fuller.

“I think the biggest thing is that it causes us to reevaluate what’s important to us,” she said. “And maybe in the process of all that, we also look at what risks that we’re willing to take and what our acceptance level is on a personal level.”