Why the common pigeon inspired the creation of beautiful, custom-made shotguns 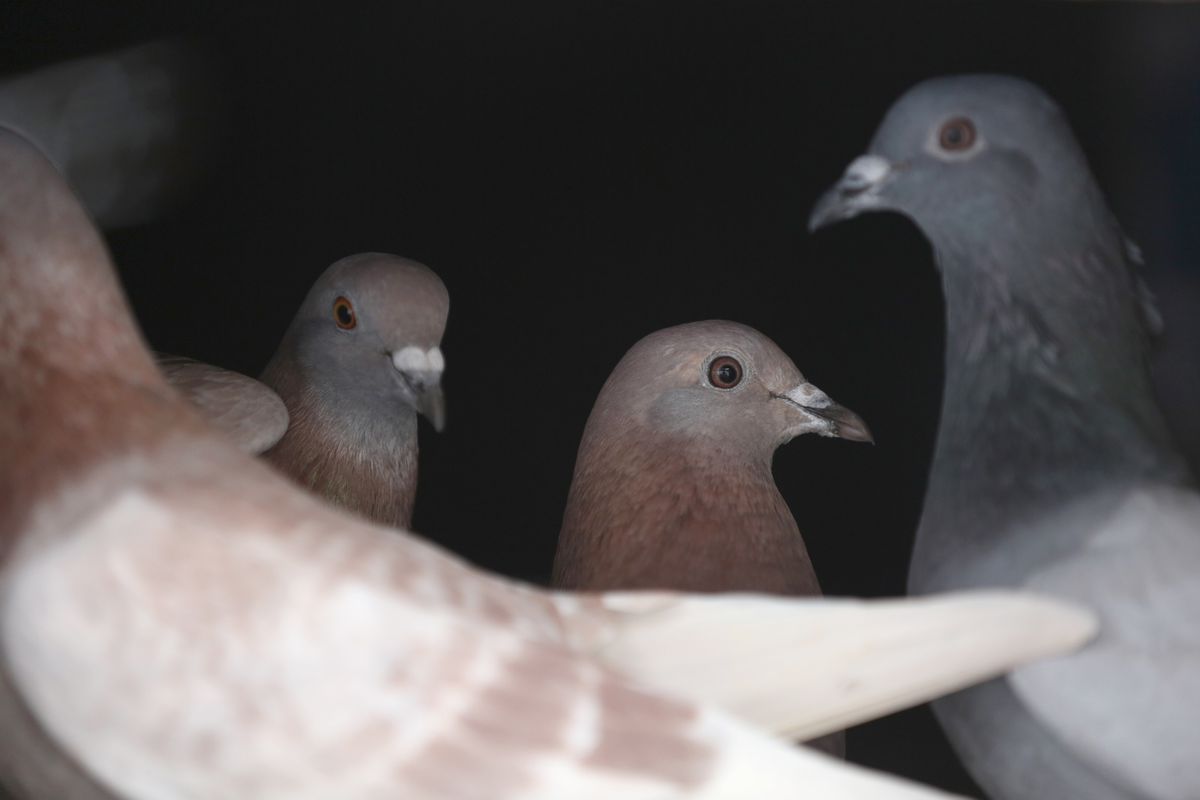 Pigeons in the attic of an abandoned building in Kenai, December 2015. (Photo by Steve Meyer)

Pigeons in the attic of an abandoned building in Kenai, December 2015. (Photo by Steve Meyer)

The birds would take flight, not so much in the order of a flight line on a carrier deck, more the haphazard flight of mountain quail bursting away to the points of the compass with little regard for obstacles, their ability to maneuver a work of art in itself.

As if practicing, some dove off the perch, straight down, only to pull up inches short of collision with the stream bed below. I don’t know that one could argue against the anthropomorphizing thought that the birds that spiral up on drafts, and dive, tumble and swoop in an aerial circus 1,000 feet up are at least to some degree having fun.

It seems those wonderful displays, with the birds’ iridescent colors flashing in the morning sun, are also nature-driven survival techniques.

When a creature spends its entire life evading predators, you expect nature has built-in some characteristics that motivate survival.

I was thinking about the pigeons that were part of my daily routine when trips to Anchorage were part of my job. Always up early with time to kill, I would drive down to the ship-yard and start my morning with these birds. Besides watching them fly, their cooing is soothing to me.

A few weeks ago while driving through Kenai, we saw a flock of pigeons staving a parking lot.

“Pigeons, sure have had a hard lot in life,” Christine announced.

If the Passenger pigeon was not once the most prolific warm-blooded animal in North America, it ranked high on the list. An estimated 3-5 billion would blot out the sun for hours as they passed on their annual migration in the early to mid-1800s.

By the late 1800s, the flocks that remained numbered a few dozen birds. The last Passenger pigeon, Martha, died in captivity in 1914. The fate of the species came with a demand for protein by a rapidly growing human population and the land they used for nesting purposes.

The pigeon’s flavor had mixed reviews, but it seems when cared for properly they were more than just palatable. I doubt there is much difference in flavor from your typical barnyard or city-dwelling pigeon. I think those taste fine, similar to the mourning dove, which most folks find good eating.

All of this happened before thoughts of conservation penetrated the minds of citizens.

My relationship with pigeons began early in life. I grew up in farm and ranch country surrounded by grain fields, feed lots and grain elevators built next to railroad tracks, and pigeons were a constant irritation to property owners.

Most of those folks were hunters, primarily deer and pheasant. The aerobatics of the common barn pigeon were a bit much for the casual wingshooter. My dad, some of his friends and a few other talented shotgunners would get the call. “Can you come shoot these pigeons? They are crapping all over the place.”

Pigeons display a remarkable ability to excrete with indiscriminate aplomb. Grain filled with pigeon poop is undesirable, so off we would go to the closest barn. Often these were barns used for hay storage in the loft and machinery storage on the ground floor. The pigeons weren’t eating much, but they made an awful mess.

We would walk around outside the barn, determining safe angles for shooting. More often than not, pigeons would fly out of broken windows, a common occurrence in old barns. Once the angles were determined and the birds came out, some were shot.

Pigeons are quick to learn. They would figure out that staying in the loft was safer. My job involved climbing into the loft and herding the birds out the window.

At age 5 or 6, I absorbed everything I could and learned a lot from those days in the barn. I read early in life and was an accomplished reader by age 8. I studied gun books and hunting stories with intensity.

A favorite, the Gun Digest, was an annual publication that listed most all the firearms available to the American shooter. When I first started reading these books, I noticed some of the shotguns were listed as “Pigeon Grade,” and they were clearly a cut above lesser guns, in appearance and price.

That’s odd, I thought. Why would the term pigeon, which seemed to carry negative connotations everywhere, be used to designate a shotgun better than most?

When I asked my expert, Dad told me that pigeon shooting in many places is an elaborate process that rich folks do for fun.

He explained that pigeons were captured and placed in boxes in a semicircle. The birds were launched from the boxes at random, and the shooter had to kill the bird inside the fence. He told me he didn’t know that much about it, because he couldn’t afford to do it and didn’t much care.

I cared about most everything involving hunting, so I studied live pigeon shooting. My answer about the “pigeon grade” label came early.

The game started in the 1700s and evolved in Europe and Great Britain, where it was a game for royalty, or those able to rub elbows with them. It created the best wingshooters the world has ever known.

For the most part, pigeon guns were aesthetically pleasing, beautiful wood, engraving and built specifically for the shooter ordering it. But that’s not all. These guns were nitro-proofed to shoot the heavy loads of the day, 2-3/4 inch 12 gauge, 3-1/4 drams equivalent, with 1-1/4 ounce of shot. They were robust firearms, built to survive many thousands of rounds of heavy loads, yet they were perfectly balanced and handled beautifully.

Across the spectrum of wingshooting there were robust guns built that were in every respect equal in strength to pigeon guns without the extravagance and the cost.

Live-pigeon shooting is a fascinating part of history, and that history cannot be covered in one brief column. So, I’ll beg your indulgence to wait for a future column revealing the story of obtaining a “pigeon gun,” and the fascinating two-year history lesson that had less to do with the guns than the people and culture at the time.