Porcupines will populate Alaska roadsides soon. You can eat them, but don’t take them to the bar. 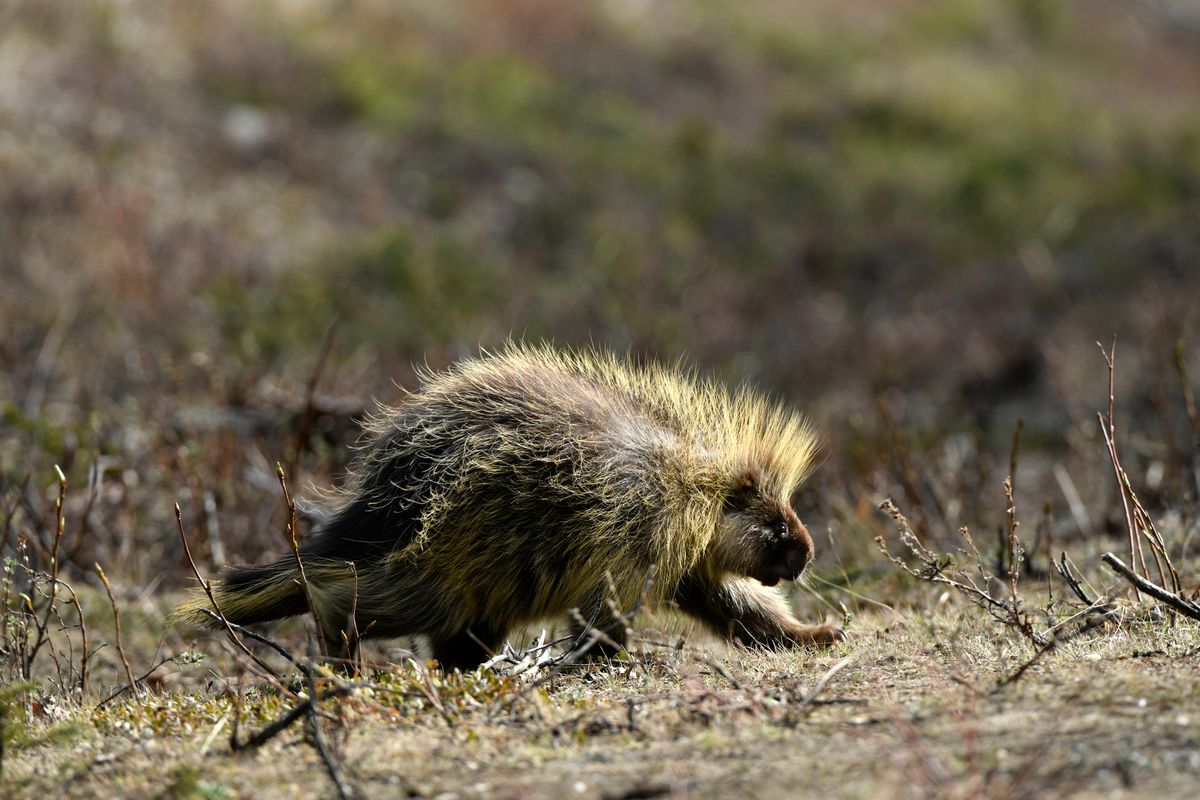 A porcupine walks along the side of the Richardson Highway south of Delta Junction last May. (Marc Lester / ADN)

A porcupine walks along the side of the Richardson Highway south of Delta Junction last May. (Marc Lester / ADN)

Porcupines are quite common in Alaska, but for most of the year they commonly visible.

One may see quite a number of them while driving in early spring. They come to the edge of the highway for a couple of reasons, but mostly to lick the remains of salt left from winter sanding.

Also, along the relatively warm asphalt, there are the first green shoots of summer. The remainder of the year, they eat a lot of flowers and the walls of your plywood recreational cabin.

Porcupines don’t move much in the winter. Their average range covers about 300 acres. Their winter diet is mostly the inner cambium layer — the white inner bark — of spruce and birch. They will also eat quite a number of white spruce needles.

Their diet is very low in nutrients and loaded with toxins.

It is amazing that porcupines, also called “quill pigs” by some, can survive and even thrive on this cardboard equivalent diet. They manage by entering the winter season with nearly 60% body fat.

Their body fat drops to half of that by early May. It’s no wonder they are at the roadsides and climbing high into the willows searching for food with a higher calorie count in spring.

Porcupines have gotten a bad rap throughout modern history. I am aware of folks who shoot every one they see, with the pretense of “saving trees” or keeping the local dogs out of trouble.

If you are worried about keeping quills out of your dog, keep him with you. And, yes, porcupines kill a few trees. Look around you and then explain why you believe Alaska has a shortage of trees.

I have my share of porcupine stories. In my younger, dumber days, I caught a porcupine (I was wearing welding gloves), dropped it into the back of my old truck and took it to a local bar, where I turned it loose — inside.

To shorten the story, both of us were quickly ejected from that watering hole.

Another time, the dog team I was driving caught a porcupine in the open and jumped him. The dogs quickly dispatched the poor critter, but not before all eight of my dogs were covered in quills. I spent a couple hours pulling quills on the trail and another few hours doing the same once I returned home.

Quills came out of those sled dogs for several weeks after that. One quill went into my bicep and disappeared. It didn’t hurt until it came out the backside of my arm and snagged on my shirt. I was finally able to pull it.

Contrary to popular belief, porcupines can’t “shoot” their quills. They do come loose quite easily, however. They also have tiny barbs on the quill shaft which keep them from readily backing out.

Interestingly enough, porcupines can also tighten up their quills. A few years back, my wife and I were making porcupine quill jewelry. We used mostly road-killed porcupines, but there were times when we ran a little short.

My bright idea was to put a piece of Styrofoam on a stick and tap a porcupine on the back where the best quills are located. Voila! A never-ending source of jewelry products.

It didn’t work quite that way.

The second time I accessed the same critter, I only got about half as many quills. The third hit on the same animal usually produced one or two quills, or none at all. I think they recognized me.

Native Americans dyed quills and used them for decorations. I learned how to braid them in long strings and wrap knife handles. I also made a porcupine brush from the tail. There are no quills on the underside of the tail. Decorative products made from porcupines are fun to make, but you need to have a lot of time on your hands and be satisfied with a wage of around a dollar an hour.

Porcupines are good to eat, although not the road-killed ones. There isn’t much meat on them, but the narrative is they will save a starving man in the wilderness because they can be dispatched with a stick.

My advice is to take off most of the fat first. Stuff them with rice, raisins and apples. A 25-pound porcupine will yield about eight pounds of meat and bones and maybe 12 pounds of stuffing.

[Alaska squirrels can wreak havoc in an empty cabin. It’s what they do to survive.]

Should you go traipsing through the woods in search of a porcupine for dinner, be prepared for a long day. They are certainly out in the woods, but they are not easy to spot. Cold snaps will keep them high in the same tree for days, or curled up under a deadfall with minimal tracks in the area.

However, there are plenty of quill pigs around. A research project in the Anchorage greenbelts some 15 years ago was able to document 28 porcupines, and those were just the ones used in the study.

Wherever and however you find these interesting and friendly creatures, they are worth watching. And remember, unless you have a smart German shepherd, keep your dog on a tight leash.