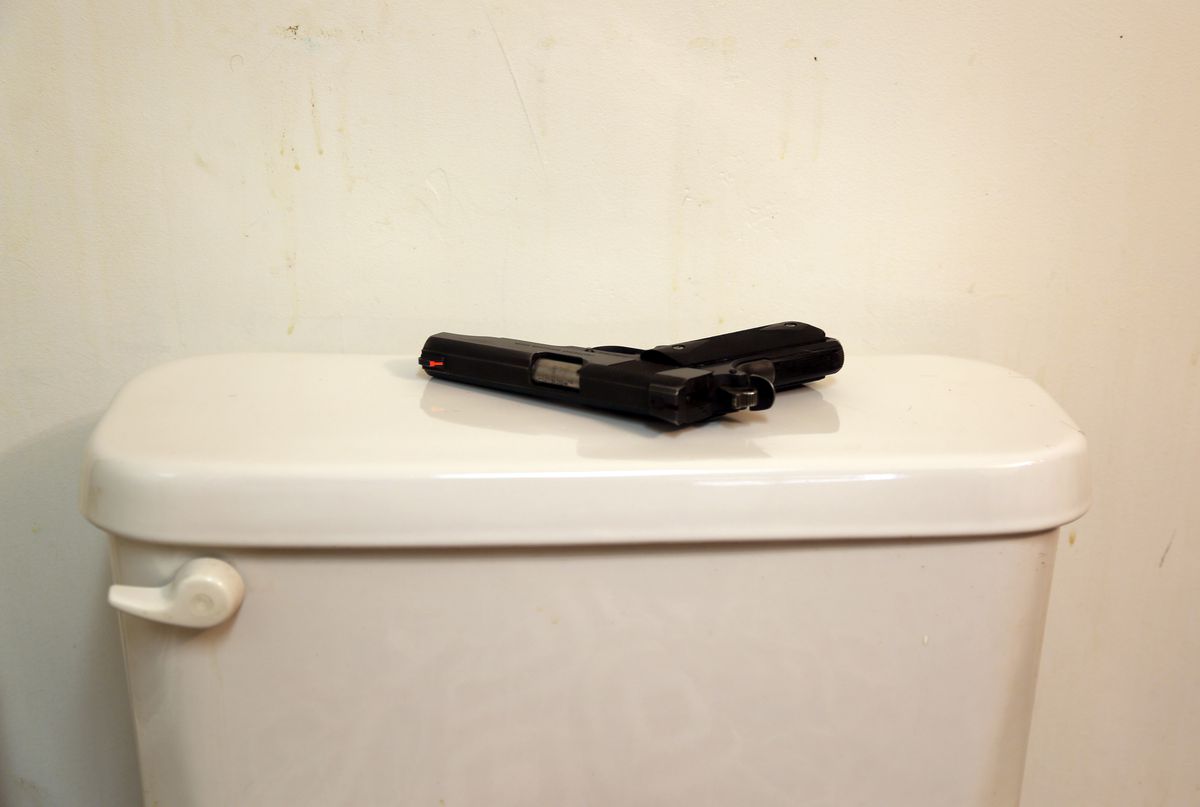 The backs of toilets and public restrooms can be the black hole for forgetful gun folks. Photographed March 2021. (Photo by Steve Meyer)

The backs of toilets and public restrooms can be the black hole for forgetful gun folks. Photographed March 2021. (Photo by Steve Meyer)

The empty pork and bean can that stood on a small clump of grass across the front yard didn’t fall over or even flinch when I pressed the trigger on the .22 rifle. No divots appeared in the soil around the can, a miss of epic proportion considering the rather short distance involved — about 20 yards.

The report from the shot didn’t sound quite right. A metallic ring seemed to hang in the air for an instant. Huh, I wondered as I raised from my shooting position, where had the shot gone? A moment later, I saw the bullet hole in the raised edge of the rear quarter-panel of the family sedan, a 1965 Chevy Impala.

Much as most of us would like to appear infallible, particularly when by virtue of occupation, like writing about guns, we should know better. We all can miss the mark at times. Since I’ve seen or had my share of mishaps and bad judgment in the hunting and shooting arena, it seems charitable to share a few of them to maybe help others avoid similar events.

Running into an electric fence to cross isn’t a common problem in Alaska, but it might be in other places.

And, if you are one of those folks who remains a youngster at heart and insists on peeing on a fence to see if it’s hot, set your gun down first. Yep, done that to the delight of a couple of hunting buddies.

One late September day in the mid-1970s, a friend and I found ourselves perched on a granite outcrop that overlooked a swamp bordered by willow and alder. An ideal spot to see a moose, our intended quarry. I had just sat down to spend some time glassing the area when I heard my buddy say, “Here, hold this.” I was turned away, and when I turned to see what he meant, I saw the brand-new .300 Weatherby Mark V his dad had just given him tumble over the edge and rattle down the cliff.

It seems he had missed the part of the Hunter Education class that insists that when you pass a firearm to someone else, you make sure they have it before you let go.

On a sheep hunt in 1975, my partner and I climbed into a series of ever-deepening mountain valleys. The optimism long-driving our journey only partially ended when our legs threatened mutiny. This was back when I believed one must have a .44 magnum on the hip, mountains be damned.

When we got back to the truck in a parking lot where the hunt started, I slid the .44 and holster off my belt and parked it on the front tire of the truck. A few minutes later, we drove off, headed home.

One might blame the oversight on being bone-weary from climbing mountains, or simply being not so bright; either way, we were 60 miles down the road before I remembered the handgun. Enough time had elapsed before getting back to the parking lot that someone had picked up the big pistol.

That may have been the low point of my firearms-related life. How in the world could anyone be so stupid as to leave a gun behind?

Over the years, it turns out a lot more than you think. Having spent — or misspent, depending on one’s perspective — a substantial part of my life on shooting ranges, I’ve seen guns left behind on a regular basis.

One afternoon we when we got home from the trap range I unloaded the shotguns and the inventory came up one short. About the time I went in to tell Christine her beloved BT-99 was missing, she received a call from one of the trap shooters still at the range. He joked with her and told her if she didn’t want the gun anymore he would be happy to take it off her hands.

When I had told her the story about my .44, she had been a bit shocked that I could be that dumb. “It’s not like forgetting the pizza box,” she said. So I may have gloated a bit when it happened to her.

Folks who carry handguns concealed in a holster attached to their belt and who have to use a public restroom will sometimes remove the pistol and set it somewhere in the stall until they finish. The back of the toilet is often the only surface besides the floor that’s available. When they leave, the forgetful sometimes walk out without it.

When I was in law enforcement and one of us used the restroom, we would always ask, “Got your gun?” when they came out. It happens, but the learning curve is sharp for most, and embarrassment alone sees that it doesn’t happen again.

One summer day, a buddy and I were taking turns throwing clay pigeons with a hand thrower for each other and shooting them with our shotguns and handloads we had built. I slung a clay pigeon out and heard a muffled pop and turned in time to see him run the pump of his shotgun and shoot again.

The barrel of his gun split into three sections, peeled back like a banana.

Squib loads, or loads with insufficient or no powder to drive the bullet, shot or wad out of the barrel, create an obstruction. Subsequent shots fired without clearing the obstruction can be serious, as they were for my buddy. If a shot doesn’t sound right, it demands checking before firing subsequent rounds.

It seems simple enough, but in the heat of the moment, a shooter may not realize what has happened.

What sort of wrath came down on my shoulders for the errant bullet hole in the family car?

In those days we often shot in the front yard, and resting across the back of the car was routine. I hadn’t considered or even had any idea that mounting a scope on my .22 changed the relationship of my sight picture and where the muzzle related to the crosshairs. The elevated scope, coupled with close range magnification, had the muzzle pointed at the fender instead of the can as it appeared when looking through the scope.

My dad being how he is immediately recognized what happened, and blamed himself for not warning me.

I dodged a bullet, so to speak. I never forgot it, and as with most things like that, it doesn’t always have to happen to you for it to have a significant effect that may prevent similar things in the future.

Steve Meyer is a longtime Alaskan and avid shooter.