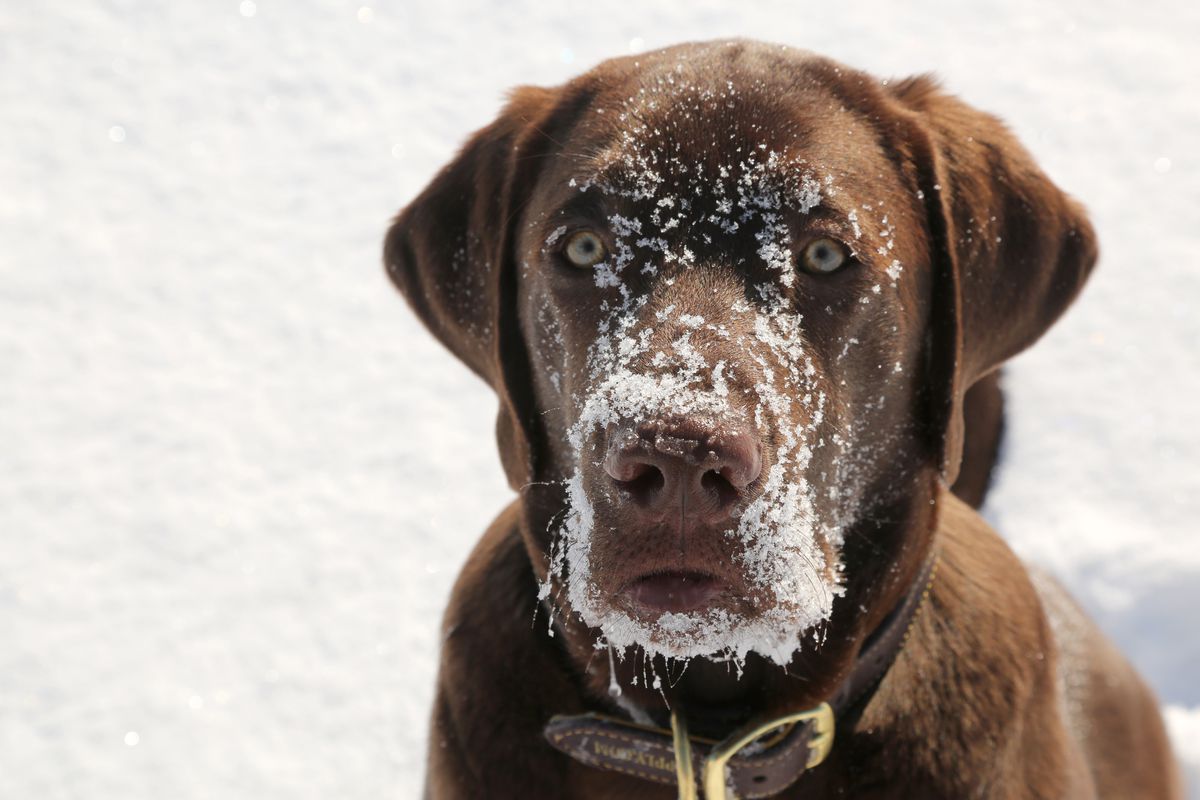 During a backyard training session, Rigby has a face full of snow after a blind retrieve (when a dog is directed by hand or voice signals to a bird or dummy he didn't see fall) in this case, the "bird" fell into deep, fluffy snow, and his people had put some duck smell on it. Mid-March 2021. (Photo by Steve Meyer)

During a backyard training session, Rigby has a face full of snow after a blind retrieve (when a dog is directed by hand or voice signals to a bird or dummy he didn't see fall) in this case, the "bird" fell into deep, fluffy snow, and his people had put some duck smell on it. Mid-March 2021. (Photo by Steve Meyer)

It happened so fast. An adorable fat pup named Rigby became a 60-pound slab of muscle and fur.

People say when a puppy is about 4 to 6 months old, the novelty of a new dog wears off. At this point you might find yourself recounting misbehaviors to your barista as she nods with understanding. She has Labradors, so she has experienced the loss of prized possessions destroyed in the pre-adult phase and can even top your sad story. You take therapy where you can find it.

Dog experts might suggest preparing yourself for such realities with a plan. They do this with a straight face that I imagine they practice in a mirror. I don’t know how many tries it takes a professional dog trainer not to burst out laughing while asking, “Where are you at in your training plan?”

When someone asked me this recently, I could not suppress my laughter.

I am at the point in my plan in which I find myself staring at a living room floor that looks like a family of ermine had a pantry party. There are tiny bits of cardboard everywhere, and I spread them out on my kitchen table to put them together like a puzzle. Solving this mystery might help me understand what the white powder is or lend a clue as to the source of the gobs of blue plastic.

It did not come as a surprise that Rigby would misbehave at some point. His early obedience for a treat did not deceive me. Even as people told me how impressed they were that he could sit and stay, I knew how tenuous the situation was. Any moment, things would not be so easy.

Yet, it was satisfying to see him sit like a good little dog, eyes focused on a biscuit.

The power of the biscuit would not last.

I had just prepared a chicken sandwich after a long day of shoveling snow. It would be my first bite of food at 4 p.m., and that is perhaps why I did not notice Rigby, at six months old, getting into position at the foot of my chair.

As I brought the sandwich to my mouth, I must have closed my eyes in anticipation of a delightful first bite. I did not see the flash of brown dog as Rigby launched and snatched the sandwich from my hands with unexpected stealth and speed. Before I could react, he had escaped through his dog door.

My jaw, which was open to take a bite, remained open in an expression of shock as I turned to look at the still-swinging dog door.

Later, I told Steve what happened. He was away from home and confessed he felt as if he was “missing Rigby’s childhood.”

“Well,” I said, “you might be missing the worst part.”

I thought Steve would laugh about the sandwich-snatching incident, but he took the matter seriously.

“Let him?” This wasn’t one of those controlled training scenarios. Rigby’s speed at retrieving a training dummy is about 3 mph — a shuffle. I would never suspect this puttering dog capable of such high speeds and a leaping ability held in reserve for criminal enterprise.

“Steve,” I said, “you have not seen Rigby in the commission of a crime.”

There is a big difference between testing a dog and being tested by one.

If Rigby ignores me when I tell him to do something in our special training area outside and away from the other dogs, I am patient. I go back to an easier test. When he feels like listening, I give him a treat. This is because we are still in the treat training phase. Later it will be praise.

Yet, when he tests me, he is not as fair. He doesn’t reserve his tests to neutral ground or allow me any advantage. He watches and waits for a weak moment. And, before I know it, he is sashaying back into the house with chicken sandwich breath.

“You need to be firm,” Steve tells me. We need to keep Rigby focused in the right direction.

I remember scenes from puppies’ past. Sometimes I was in awe at the sheer level of destruction — a shop floor covered in pink shotshell wads, a puppy sitter calling to ask if it is OK to pick up opened boxes of shells.

We used mouse traps and ran rope through kitchen cabinet handles when we planned to leave Cheyenne alone in the house, another rambunctious Labrador whose transition to adulthood cost me several shoes and the living room couch.

In her younger days, Cheyenne demonstrated classic Labrador guilt. She had a dance we might have called the “Do You Still Love Me.” She performed it when we held up what was left of an item she destroyed. She did what looked like Latin dance moves — traveling forward in a creep step (Do you Still Love Me), followed by a back rock step (You Might Be Mad Still), followed by a quality of action that melted our hearts as she Cha-Cha-Cha’d her way forward (You Still Love Me).

An abundance of YouTube videos of guilty Labradors attests to human susceptibility to sheepish Labrador smiles and wiles. It’s as difficult to resist this charm as it is to keep up with a good training effort after a puppy is no longer a darling good boy.

Rigby is a challenge now. He does not have adorable guilt, but his guilt-free charges still entertain, despite the frustration. I don’t know if many people sit in a duck blind and talk about how cute their grown dogs are. Probably not. I do, but I try not to do it too much.

A dog never stops being cute to me. I can’t wait to see Rigby splash into the water this summer to retrieve training dummies. I sure hope he will. There is that moment of fear when I wonder how to get the dummy back should he not retrieve it.

We already know the sound of a shotgun doesn’t bother him, and we’ve already seen that he can keep his focus on chicken until the critical moment. We have yet to learn if we can hone these abilities into duck retrieving.

Will he nudge me out of bed in the morning to go to the duck blind and sit with me there? I don’t know. But he sits beside me in the recliner and watches me eat ice cream.

What stage of training am I at?

I’m at the “You get the last bite” phase.