3 climbers attempted a first ascent in the Aleutian Range. An avalanche blew them down the mountain instead. 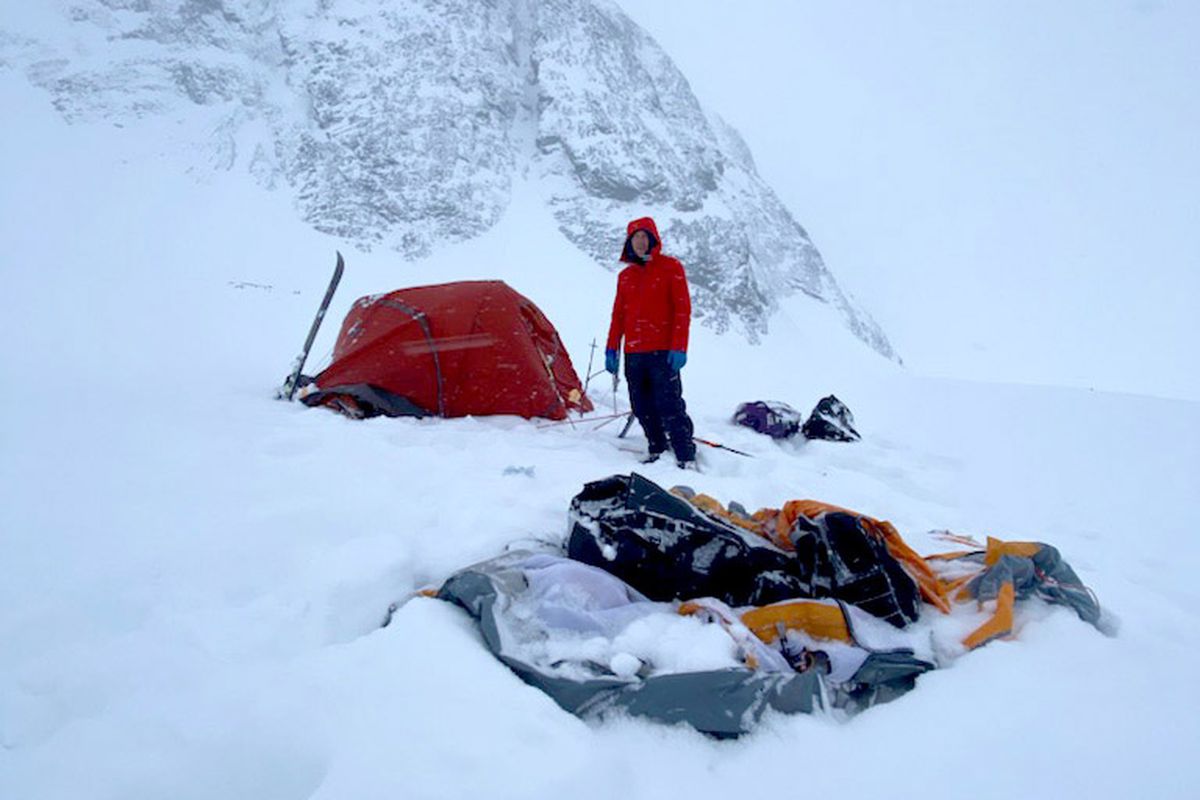 An air blast from an avalanche on Mount Neacola launched three climbers and their gear hundreds of feet on April 4, 2021. (Photo by Justin Guarino)

An air blast from an avalanche on Mount Neacola launched three climbers and their gear hundreds of feet on April 4, 2021. (Photo by Justin Guarino)

When Ryan Driscoll, Justin Guarino and Nick Aiello-Popeo woke up in their tents on Easter morning, they were tumbling uncontrollably down a slope in the Neacola Mountains of the Aleutian Range in Southwest Alaska.

For what Guarino described as the longest 20 seconds of his life, the tents were propelled down Mount Neacola in Lake Clark National Park and Preserve by an air blast from an avalanche above them.

The climbers, all experienced, had set up camp several days earlier and were waiting for weather to improve before they attempted to reach the roughly 9,350-foot peak via the north face — a route that has never been successfully climbed, according to the American Alpine Club, and has stymied mountaineers like the legendary Fred Beckey.

Just before 4:30 a.m., Driscoll said, he woke up pressed against the front wall of his tent as it started to flip.

“The immediate first thought was, oh no, I’m getting buried in an avalanche,” he said.

Instinct kicked in as the tents tumbled down Lobsterclaw Glacier. Guarino said he and the others reached out their arms in hopes of creating an air pocket as they anticipated being buried. But when the tents came to a rest roughly 300 feet away, they were on top of the debris.

The men called out to one another and realized they were all safe.

“We’re like, OK, if we can all yell to each other, then we can’t be that bad off,” Driscoll said.

[‘Send help now’: Two mushers describe the events that led to their rescue from the Kobuk 440 race trail]

Then the situation became about survival. Driscoll had his phone zipped into his chest pocket and used the light to find his headlamp and pull on winter gear and boots.

“At this point, my tent was collapsed and full of snow,” Guarino said. “And I’m just in my long underwear, my skivvies, in my sleeping bag.”

Guarino headed toward Aiello-Popeo’s tent, which was contorted by the fall and partially buried. As Guarino worked to free Aiello-Popeo, Driscoll recovered Guarino’s boots from an area near the initial campsite.

Aiello-Popeo hit his head during the fall, but the men were otherwise uninjured. Driscoll said it felt like he’d just been in a car wreck — they were shaken up and a little sore, but otherwise fine.

The three managed to prop one of their tents back up and sheltered until dawn.

When daylight broke, they worked their way around the glacier, hunting for the remainder of their food. They didn’t know how long they might be waiting, but it was clear that the weather was not going to improve enough for a plane to fly in that day.

The men, who work together as climbing guides in New Hampshire, had traveled to Alaska with plans to spend about 3 1/2 weeks on the mountain. They estimated it would take six days total to climb the 4,500-foot north face and return to their campsites.

Driscoll said they managed to find enough food to feed them comfortably for a week, but the rest of their rations were gone.

They messaged Doug Brewer, the pilot who had flown them into the range, on their InReach devices. He agreed to pick them up as soon as it was safe.

Brewer has been flying in the Neacola Mountains for decades and described the range as breathtaking but requiring a technically challenging flight through a narrow canyon around the incredibly steep Mount Neacola. He said there’s a limited window of time each day with enough light on the glacier to safely navigate, and only during low winds.

“Most people like (the climbers), they’re usually ready for things to happen and well prepared and they all know that’s part of the sport, but this one was just out of anybody’s hands,” Brewer said. “They couldn’t predict this was going to happen based off avalanche reports or anything. They thought they were in a safe spot and it just happened.”

The Neacola Mountains are visited infrequently, even by climbers, said Megan Richotte, a spokeswoman for Lake Clark National Park. That’s partly because tackling the rugged terrain requires extreme skill, but also because the mountains — located in the northern portion of the national park — are in such a remote area.

Steve Gruhn, an Alaska mountaineering historian and longtime member of the Mountaineering Club of Alaska, said it’s a topic of debate among many climbers whether the area is best described as a part of the Alaska or Aleutian range. The mountains stretch from the northeast tip of the Aleutian Range to the southwest corner of the Alaska Range.

Gruhn said the mountain range is relatively newly named. The first recorded climbers explored the area in the 1960s but Gruhn said it took several more decades for another set of climbers to publish findings.

Few climbers tackle the peaks because weather frequently disrupts attempts, Gruhn said, and the remote location can be costly to reach. Driscoll received a grant from the American Alpine Club to fund the north face attempt.

Heavy snowfall and high winds in recent weeks had amplified avalanche risk in areas of Lake Clark National Park that are normally not affected, Richotte said.

The climbers were nervous staying in the avalanche area, but Driscoll said there didn’t seem be safer options. So they waited.

Blizzard conditions continued for much of Monday, but by Tuesday the skies were clearer.

The climbers attempted to stomp out a runway and Brewer and his son flew in, making an uphill landing on the glacier in their ski-equipped planes. The landing was rough because avalanche debris had obscured the runway area, Brewer said.

“It was still cold, probably zero, and it was a down-glacier wind about 15-20, so this was right on the edge of being able to get them out safely,” he said.

The climbers helped stomp out additional chunks of debris on the makeshift runway and turn the planes around.

“I just looked in the back and asked if they wanted to turn the heat on and they just looked at me and laughed,” Brewer said. “They were pretty excited about getting out of there, no doubt.”

Not long afterward, the climbers were sitting at a table in a Nikiski restaurant eating hamburgers.

“I think that’s one of the most interesting things about adventures in Alaska,” Guarino said. “There’s such a stark contrast. One moment you’re on the glacier and the next you’re just back in town.”

They stayed in a motel and decompressed for the day, Driscoll said. But conversation quickly turned back to the mountain. None of them felt ready to back down.

The three each have more than a decade of experience and have summitted peaks all over the world. Two work as avalanche instructors and all three are climbing guides. They returned home to New Hampshire on Thursday but are keeping an eye on Alaska weather in hopes that conditions in the Neacola Mountains will improve enough in the next few weeks that they can return.

“It’s not really about conquering a mountain or anything for most of us,” Driscoll said. “For us, we really like having an adventure where people don’t really go climbing ... it’s kind of the reason we got into climbing in the first place. So, as scary as it is, it still really kind of has its hooks in us.”