Studies in the side-by-side shotgun 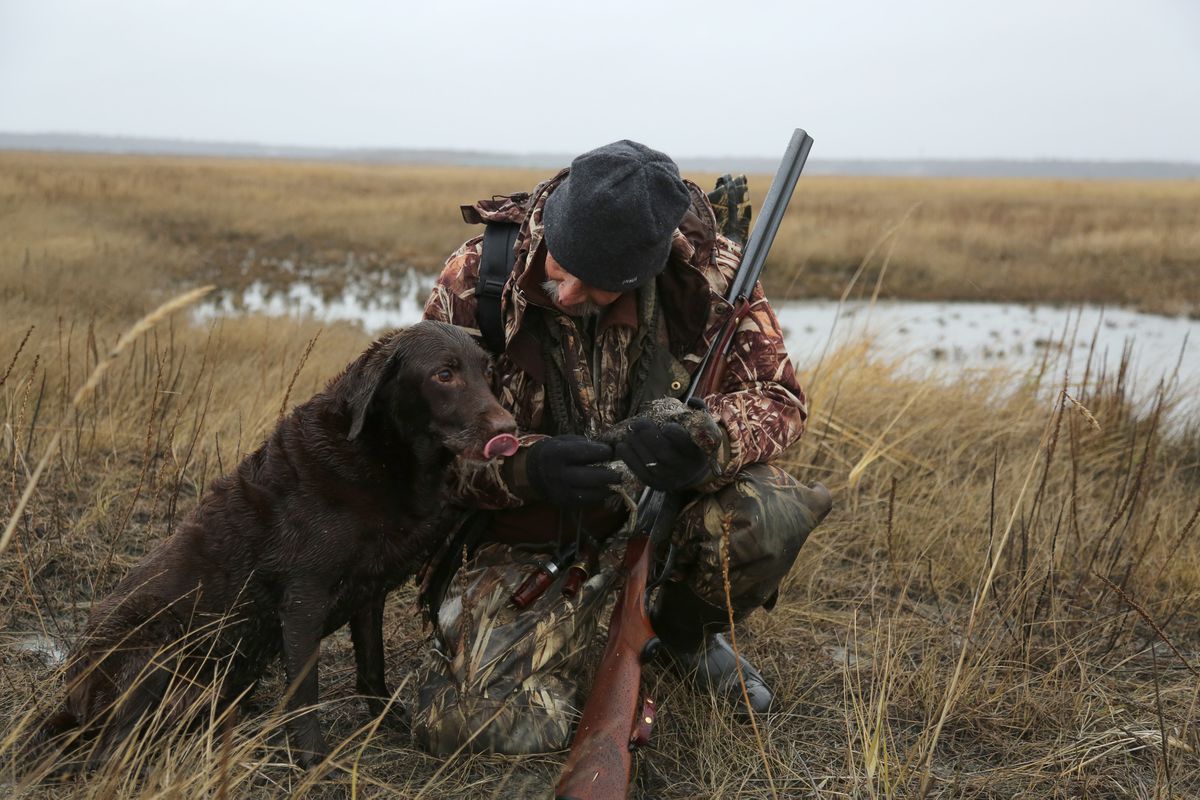 Steve Meyer and Cheyenne, a couple of old dogs, learn some new tricks with a double-barreled shotgun. (Photo by Christine Cunningham)

Steve Meyer and Cheyenne, a couple of old dogs, learn some new tricks with a double-barreled shotgun. (Photo by Christine Cunningham)

The flock of teal lifted off into driving wind and rain out of the northwest that had left the surface of the river choppy. The dozen or so birds gained elevation as they came straight to where Christine, Cheyenne and I hunkered down in our makeshift blind built around a handy driftwood stump.

In a couple of blinks of the eye, the feathered rockets were about to pass directly overhead at 50 yards.

Christine announced they were too far for her, and I thought, “This is this shotgun’s purpose in life,” and I slapped the front trigger. The lead teal folded at the shot, and I slapped the trigger instantly as the muzzles passed the second bird. Nothing happened.

I’ve had my share of failures in the course of a life that I wouldn’t trade for anything. I expect one’s view and circumstances define most things, and when I count my failures it is in the context of never achieving much wealth, political power or the ability to sing, dance or play the guitar. None of which bothers me much.

The success I’ve had in the shooting arena makes up for a lot of those other things. Since childhood, I’ve always been able to shoot well with most any sort of firearm you might stick in my hands. Whether with pistols, rifles, shotguns, shooting targets or shooting or in the field has come naturally to me.

I expect it has as much to do with loving it so much as anything else. But, my success in firearms did not include the side-by-side, or as they are often referred to, the double-barreled shotgun.

I shoot the over/under version of the two-barreled shotgun as well as about anything I’ve ever shot. Not so much with those doubles with their barrels side by side. It isn’t an uncommon phenomenon. I discovered this back in the 1970s, when conventional wisdom suggested that some folks, like me, had difficulty with the two-barrel sighting plane of the side-by-side.

Browning, the makers of the wonderful Superposed over/under shotgun, used this as a sales gimmick to steer folks to their stack barreled gun, and it worked, particularly in the clay pigeon circles, where over/under shotguns are the choice for most top shooters.

That rationale seemed fine to me. After a couple of failed attempts to shoot side-by-sides, I had an excuse that worked for most folks. But, it stuck in the back of my mind, especially when I would encounter an upland gunner shooting a classic double in the field and doing it well.

In one’s advancing years, after having done most of the things you want, or at least tried to, having a few goals to work on keeps the blood pumping. When I turned 60 a couple of years ago, I started thinking about the side-by-side and that maybe it wasn’t too late to learn to shoot one well.

I started studying the side by side shotgun, its history and the particulars around its successful use in the field. This took me on a two-year journey of discovery one would not suspect from a glance of the typical side-by-side game gun.

A writer could fill a newspaper page every day for a year and still miss much of the historical significance of the game gun, the royalty that drove the London gun maker’s art that resulted in the magnificent Purdey, Boss, Woodward and Holland & Holland (to name a few) game guns that many of us would like, but few can afford.

It is a bit reminiscent of the finest automobiles, boats, homes and about anything else where there is a separation between the very best and what common folks can afford. The money that drove the development also resulted in a trickle-down effect that finds many of the concepts used in the best transferred to products most folks can afford.

From the outset, I knew a Purdey, Boss, Lancaster or Holland & Holland would not be possible with the limited resources I had. In knowing that, I focused on the American-made A.H. Fox, Parker, L.C. Smith, Ithaca and Winchester M21 side-by-sides. The collector value of these shotguns has skyrocketed, and finding one in good shape that stands up to the thousands of rounds I figured it would take to learn to shoot it left me abandoning that thought.

While the London gun makers basked in the limelight of best guns, a number of European countries produced some outstanding shotguns that may lack the sheer beauty of the London guns, but if one knows what they are looking for, elegant and robust game guns can be found.

I didn’t know what I wanted until I knew. It turns out I wanted a 12-gauge side-by-side, made sometime before the late 1960s (when gun quality took a sharp decline). Hunters across the pond don’t typically share the American penchant for “bigger is better,” and the typical 12 bore game gun was chambered and proofed for the standard 12 gauge load, a 3 dram equivalent powder charge with 1-1/8 ounces of shot — what most American shooters use for trap and skeet shooting.

It’s a fine load for most upland shooting, where lead shot is still allowed. Not so much if a hunter is using steel or Bismuth shot. A bit more shot and powder is the order of the day, and while I did not originally intend for the side-by-side to be a waterfowl gun, things took a turn and I ended up with the functional equivalent of a live pigeon gun without the embellishment.

Proofed for 3-3/4 dram loads with 1-1/4 ounces of shot, the German-made double I ended up with suffices for waterfowl using 1-1/4 ounce loads of Bismuth.

The day after the 2020 waterfowl opener, the old over/under I planned to use to introduce Rigby to shotguns developed problems I couldn’t fix myself. So, I thought, why not use the old side-by-side and Rigby (we didn’t have Rigby yet, but we knew when we did get him, he would be named Rigby) and I could learn together.

First thing, I removed the bead from the barrel, a trick I didn’t know when I had tried the side-by-side in the past. It turns out that might have been all I needed. My shooting isn’t quite as good as with the over/under, but it’s close, and it’ll be fun shooting up the shells that will get me there before the next opener.

There wasn’t anything wrong with the gun when I slapped the trigger the second time on the flock of teal. The old gun has double triggers, a challenge also new to me, and another thing to master.