The return of migrant birds heralds a new season, even as the old one lingers 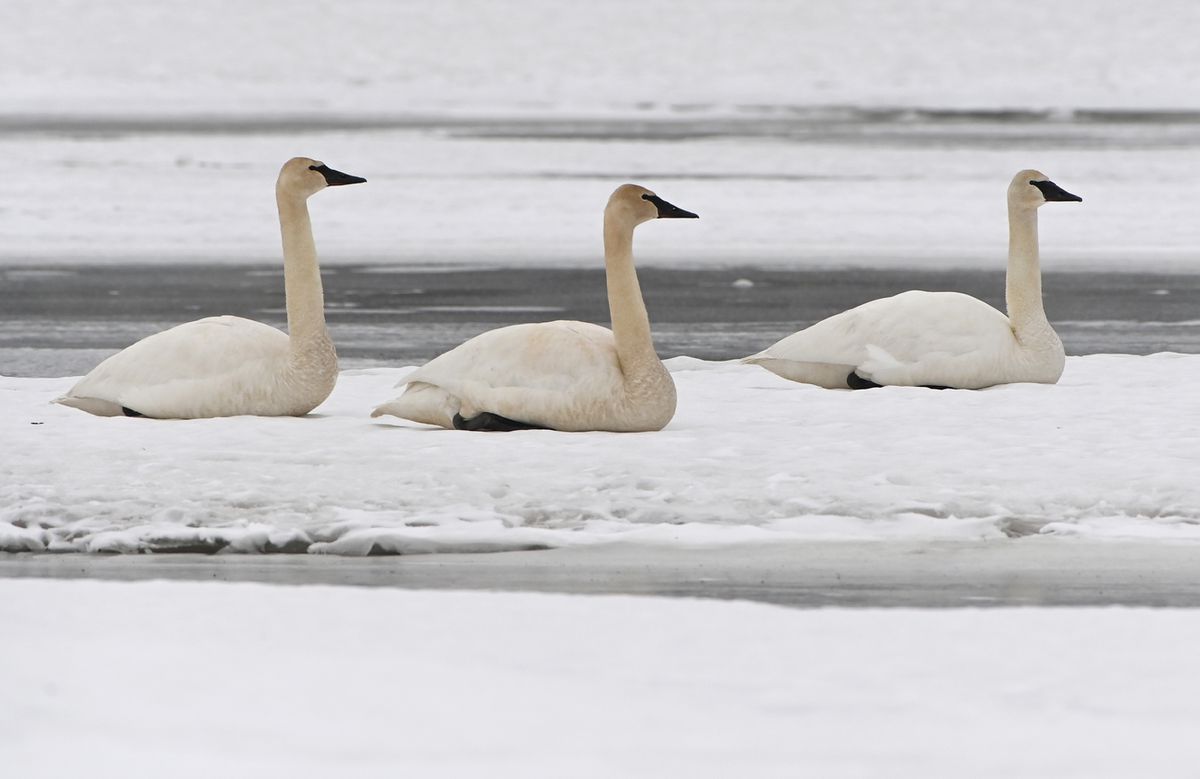 Trumpeter swans rest on the snow at Westchester Lagoon during their migration north. The previously open water refroze during the recent record cold, preventing their ability to feed. (Bill Roth / ADN)

Trumpeter swans rest on the snow at Westchester Lagoon during their migration north. The previously open water refroze during the recent record cold, preventing their ability to feed. (Bill Roth / ADN)

On Monday, the 12th of April, Delta Junction hit minus-35. Not for long though. By 7 a.m. the temperature had come up to minus-11 and hasn’t looked back since.

The few birds that were circulating shivered and sat tight. Now all of their buddies are arriving. Interior temps are reaching the low 50s and are forecast to rise another 5 or 6 degrees by next week.

I like snow. My family likes snow. But when it becomes slush and is no longer usable for our sled dogs and snowmobiles, then I would just as soon it was gone in a day. Have you ever stuck a Skandik Superwide in 4 feet of sloppy snow? It took all that my endless-rope come-a-long had to extricate the machine and its load of firewood.

My German shepherd sat belly-down watching me, too hot to even smile. Funny how 50 degrees seems scorching in April, but the same temperature frosts us in July.

There is water standing on many Interior lakes, and while that is bad news for snowmachiners, it is great news for ducks and geese. Creamers Field in downtown Fairbanks is the hotspot where most birders flock. Even lazy birders can go there and see a number of species from our vehicle.

But if you really want waterfowl, raptors and the various types of songbirds, Delta Junction has no parallel. The barley fields draw every type of waterfowl that uses the Interior flyway. The raptors follow the waterfowl. Songbirds, which we think mostly as insect eaters, also use the fields to glean overlooked barley, oats and other grass seeds.

Much of the Interior has excellent fall berry crops, mostly lingonberry and blueberries. The berries that froze and were buried in the snow are readily available for the arriving migrants.

The first waterfowl to arrive are trumpeter swans, usually followed by goose and various gulls.

Snow buntings and longspurs are generally the first songbirds. We had a slate junco in the yard this afternoon. There are harriers (marsh hawks) working the edges of the grain fields. I also spotted either a red-tailed hawk or a rough-legged hawk circling high. A good birder could probably tell at a glance, but that isn’t me.

Robins will be here soon, though they seem to not show in Paxson until the end of the month. Sandhill cranes are a week away, as are white-crowned sparrows. Swallows are a couple weeks out, and arctic terns still have a month of traveling on their route from the Antarctic Circle to Alaska.

Terns are the long-distance migrants, traveling about 10,000 miles, but the bar-tailed godwit makes the most amazing flight of them all.

Most folks have no idea what this bird looks like. Unless you are a birder you probably never heard of a godwit. The bar-tailed godwit is a good-sized shorebird. They weigh in at a little over a half pound. Figure the size of two robins, with longer legs.

They are rusty in color and have a long, slightly up-turned bill. Bar-tailed godwits nest primarily in western Alaska in relatively unpopulated areas. Their migration flight is truly incredible. They travel non-stop across the Pacific Ocean from their wintering grounds in New Zealand and Australia — a distance of 6,000 to 7,000 miles — in eight days. I bet they are hungry when they arrive.

All of us enjoy the sight and sound of the migrants as they herald spring. For many of our friends and neighbors off the road system, the first waterfowl mean much more. The birds are the opportunity for fresh food. And eggs.

You and I can drive to the store and buy a chicken that’s been long-frozen and pumped full of antibiotics and hormones chicken or pick up a dozen old, anemic eggs. The folks out on the Bering Sea coast in places like Scammon Bay don’t have that option (and may prefer not to have it.)

Yes, the snow is leaving us and somehow that always surprises me. I may get a few more wood-hauling trips out of the Skandik, and possibly a trip or two into the mountains in the early morning when the remaining snowpack is still frozen after a cold night.

We may miss the snow, but the call of sandhill cranes high overhead and the trill of a dark-eyed junco from the top of a spruce are more than adequate substitutes.