As birds begin to crowd Alaska’s shores and fields, look for the arrival of the tiny painted lady butterfly 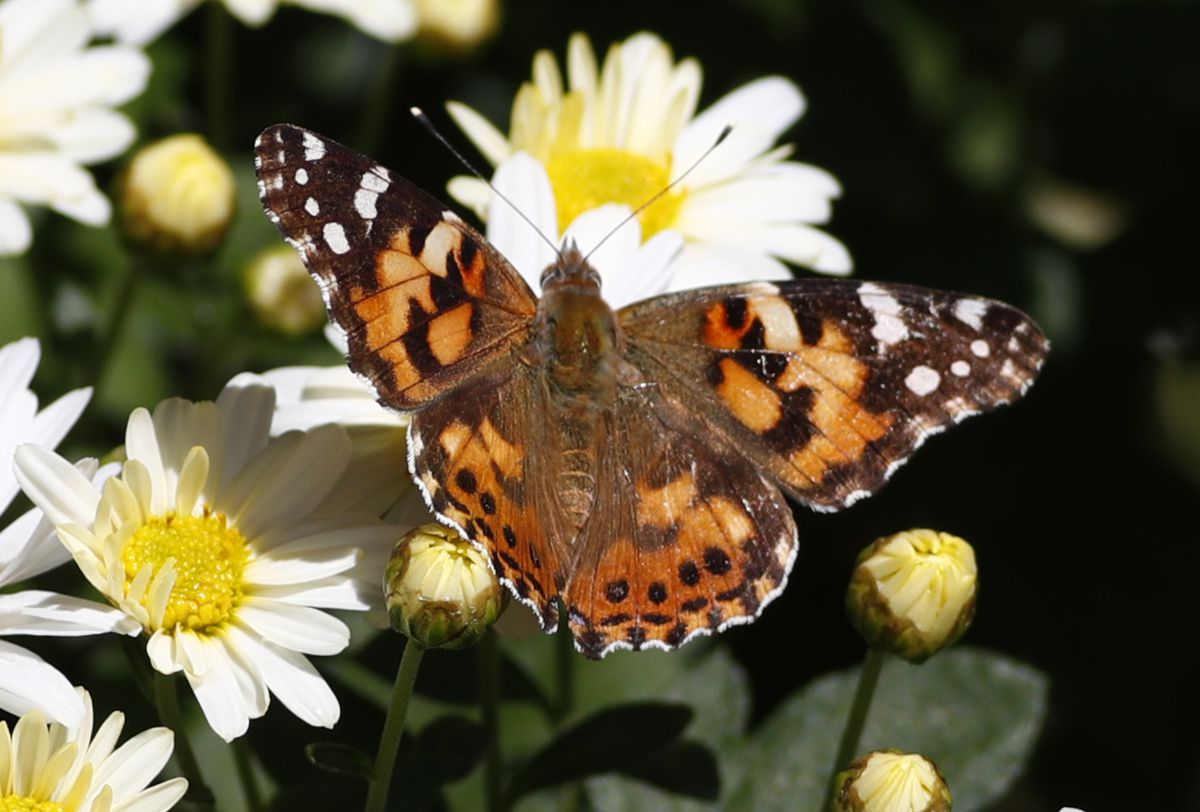 A painted lady butterfly flies near daisies in a garden on Oct. 4, 2017. (AP Photo/David Zalubowski)

A painted lady butterfly flies near daisies in a garden on Oct. 4, 2017. (AP Photo/David Zalubowski)

When we think of migrations, usually it is our avian friends that come to mind. Indeed, many of the waterfowl and raptors have arrived in the Interior. Cordova is only a couple weeks away from its annual shorebird festival. I saw my first robin along the roadside on Thursday.

However, birds aren’t the only migrants. Butterflies migrate too.

Most people are aware of the spectacular and well-documented migrations of the monarch butterfly. We don’t have those in Alaska, but we have the Canadian swallowtail, which has a similar look with yellow and black stripes.

We also have the migrating painted lady. These small butterflies with their familiar orange, black and white wing pattern are one of the first spring butterflies we see.

Surprisingly, they don’t winter here. As soon as the first frosts hit, they’re off. Many travel 1,200 miles south to find a location warm enough to over winter. Their migration path is mostly unknown.

They return in the spring, but the return trip may take several generations to complete. We had a painted lady on our porch this afternoon. I captured it to be certain my ID was correct. These butterflies die if they get cold, so this little dude had to be a migrant. I bet it has a story ...

The first of the mosquitoes have appeared in the woods around Delta Junction. The first mosquitoes are always the big slow ones that are easy to swat. The swamp ponds need to warm a bit and lose their nightly ice cover before we will start to see the little insufferable kind.

At least the birds will be glad to have them. Virtually every migrating bird that comes to Alaska eats mosquitoes. We think sparrows, snow buntings and the like eat seeds, and they do, but they also eat tons of bugs — of which mosquitoes are the most plentiful. How do you think their babies grow so quickly? High-quality protein is the answer.

The Delta grain fields are home to spring protein. Thousands of ducks, geese and swans have arrived. A rough — very rough — survey indicated 40,000 birds on the ground between 9:30 a.m. and 1 p.m. on Thursday.

The common waterfowl were mallards, Canada geese and trumpeter swans. A very few pintails, some goldeneye and a couple pairs of teal rounded out the ducks. White-fronted geese and several snow geese were also spotted.

The problem with waterfowl identification in the Delta fields is distance. You need really good glass, and even then there are only a few places where the majority of birds are close enough to get positive identifications.

The other issue is that there are many, many fields and they are miles apart. I contented myself with an 80-mile drive to get an overall picture of the numbers of waterfowl.

Quite a few raptors were also in evidence. Most of them searching for voles, but I believe many are also optimistically hoping for a stray duck. Redtailed hawks, roughlegs, northern harriers (marsh hawks) and Swainson’s hawks were in evidence.

Kestrels have also arrived. I spotted one a few days ago with a redpoll he had captured. Voles and grasshoppers are the preferred diet of these little falcons.

American kestrels, commonly called sparrow hawks, are at home over most of Alaska. They like the open country of fields and scattered woodlands and nest in hollow trees, often taking over woodpecker or flicker holes.

Sadly their numbers are in a steep decline. Research is ongoing but some suspect it might be something that occurs during migration. Alaska’s kestrels go as far south as Texas, and there are plenty of hazards along way — windmills, power lines and pollutants.

Urban environments are not friendly to any of the flying critters that have to travel far. Raptors are at the top of the food chain, thus chemicals that are in the prey they capture build quickly in their systems. Ducks and geese contend with hunters, but that is only a small portion of their troubles. Pesticides are a major killer of these birds.

Butterflies? They are the most delicate of all our migrants, but they seem the least affected by the negative habits of human critters. We don’t eat them, nor do we spray them. Should we ever pollute our Earth to its death, maybe the painted lady will be the last one standing.

Or it may be a mosquito.