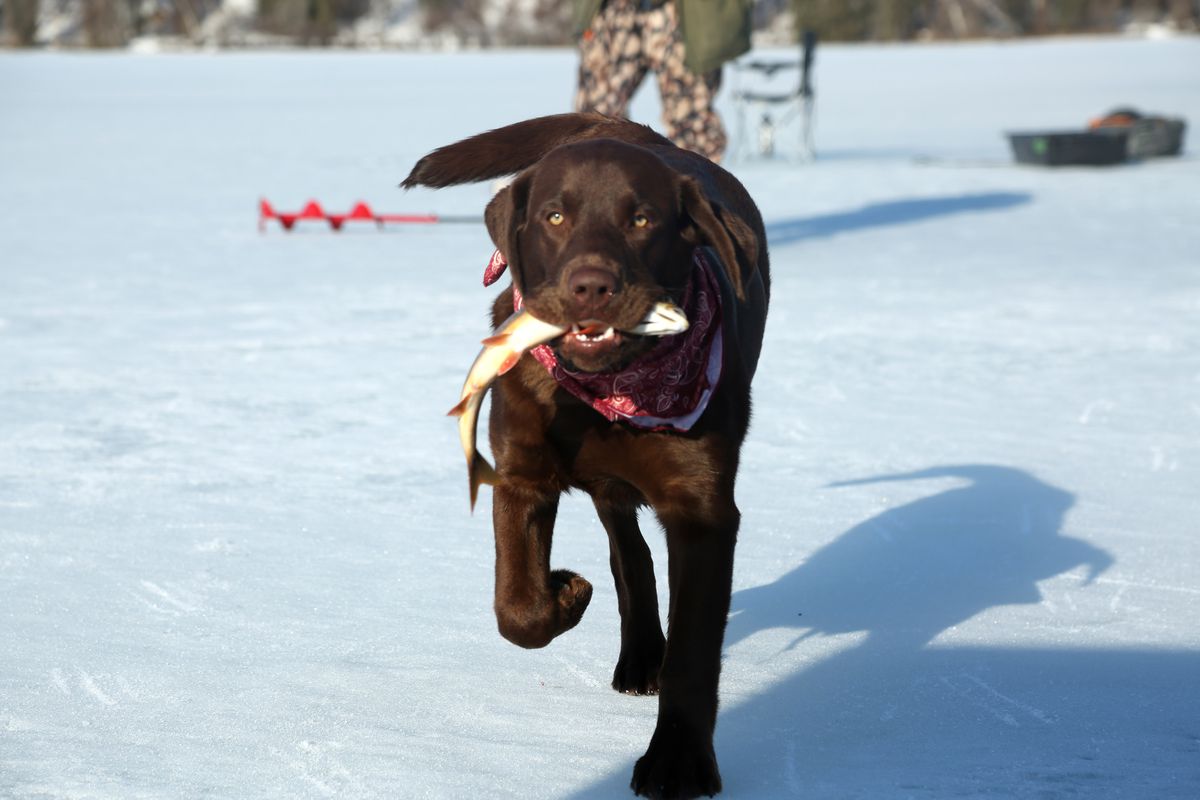 It’s not every late April that you find a few feet of ice left on the lakes in Southcentral. On a weekend when many friends headed to Homer for the annual Homer Winter King Salmon Tournament — also not usual in April — we headed to a favorite ice fishing lake.

There’s nothing like having a chocolate Lab for company on a day’s adventure. While human friends often talk about life circumstances that might distract from the enthusiasm, a dog just shares it with you.

Rigby is a still-growing, nearly-90-pound-slab of chocolate Labrador. I have wondered why breeders did not call them brown Labs. It must be because they are such sweethearts. In that regard, Rigby represents his breed — a rather large flop of a dog who plows and plops his way through each day. A delight.

When he jumps out of our truck at the lake, there is nothing to hold him back. I sure can’t. We need to work on that. A proper dog does not fly out of the cab of a truck like a trapped squirrel. But I never liked to ask to be excused from the table as a kid, so his unbridled enthusiasm reminds me of childlike joy.

The morning sun was out over the lake, a white sheet of sparkling hard water. We followed Rigby, who seemed to know where we were going even if he’d never been to this lake. His confidence charmed me.

“I’ll follow you,” has long been my ode to bird dogs. After all, I’m less apt to know where the birds are.

That isn’t the case with fish, but Rigby gleans our general direction in enough glances back and circles around us so that he manages to be the leader on cue.

I keep my eye on my spot, and we all head straight to it. Years ago, I lucked onto this fishing hole on the first try and had never explored another one. Like many lakes, it seems my best fishing is where the shape of the lake necks inward.

There is usually a tree that points to my spot, leaning out from shore. I kept this tree in my sights as we plodded across the lake. The bottom topography of the lake drops about 20 feet out from the end of the longest branch — I sure hope the wind never blows it down.

It seemed the fish were right there — if I was off by a few feet, I would know when I dropped my lure to the bottom. It should be 20 feet, not 10.

Rigby watched as I paced around with the hand auger as a divining rod. He sat down to watch me drill a hole. But a good Lab can’t resist offering help. Rigby licked my face as I struggled to churn ice, and Steve laughed at us. Then Rigby started digging near the spot where I drilled.

The ice was hard for a few inches then gave way through overflow before the blade found a hard edge again. I’m not a daredevil when it comes to late-season ice fishing — six inches of depth would unnerve me, and I was half-glad to know I had a few feet to drill.

It gives me pause each year while driving through Cooper Landing to see an ice shanty on the edge of ice while nearby boats and people in waders fish open water. That’s not for me.

The ice was about two feet deep, and the temperature was 50 degrees. I don’t think I ever remember a nicer day of ice fishing weather. Neither did Rigby.

Within minutes of setting up, I picked up my camera to capture an image of my two fishing partners — Steve in a camp chair and Rigby sprawled out at his feet as if they were lounging in a living room. But Steve was already fighting a fish.

I ran over just as the fish unhooked itself and flopped on the ice. Rigby snatched it up and brought it to me. His tail wagged along with his whole body, but he wasn’t ready to hand the fish over just yet. He turned around and headed back to Steve with it.

For the next few hours, except when roused by one of us catching a fish, Rigby slept on the ice next to a blanket we had brought for him. It made sense to him to pile fish on the blanket rather than sleep on it.

As cute as this idea was, Steve eventually put the fish on snow he shoveled into our sled.

Rigby retrieved all of my fish to Steve and all of Steve’s fish to me and never broke the skin. It seemed this was a good show of what dog folks call a “soft mouth” — a dog that retrieves game undamaged and fit for the table.

Around noon, the fishing had slowed and we started to gather our gear. Rigby helped gather things, and I wondered if any of us knew how lucky we were.

Friends often share what a perfect moment looks like as a life aspiration — sitting on a beach with toes in warm sand or something to that effect. It’s worth a lifetime of work to achieve such a perfect moment.

I wondered how often people reached a visioned pinnacle, found themselves in their perfect moment, only to realize it was short-lived. Or not so simple out of context. It’s easy to forget the insects or the sweat or the onlookers.

As Rigby sat with me, I thought about how nice it was to sit in a lawn chair on the ice, listening to the woods melt and the birds sing as we basked in the faint heat and shutting our eyes to the fluorescent light reflecting off a lake’s worth of ice. Cool air drafted up to us from below like air conditioning.

Rigby’s face broke open in a grin, and he panted his fish breath right in my face. And then I realized it wouldn’t be perfect without a bit of imperfection to wake you up from an image of life.

I couldn’t have described it that way in advance, but that was my best day of ice fishing.