An Interior Alaska road trip nets 2 ptarmigan, a spring outing for a hunting dog and a consolation prize for a rooster 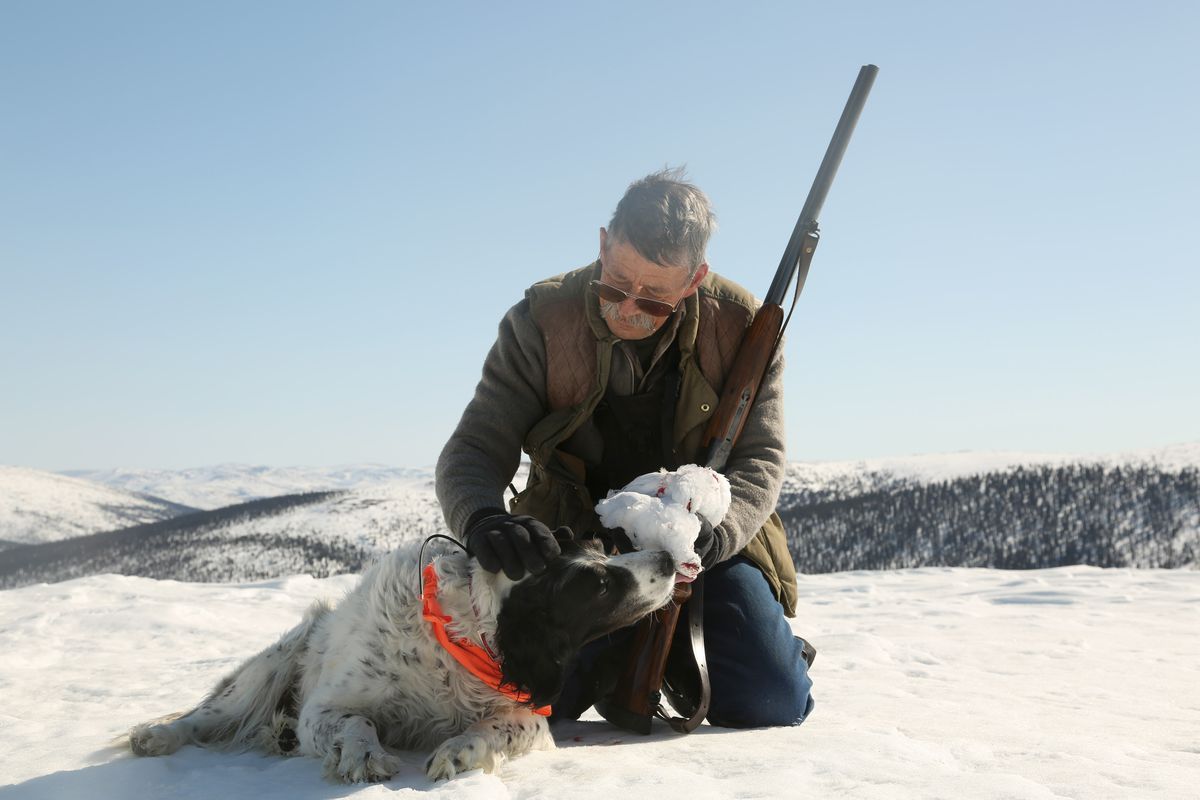 “You drove 1,400 miles for two birds,” a fellow we know commented. “Must have been a miserable trip.”

Smiling to myself, I didn’t attempt to explain how it had been anything but miserable.

Winchester, our oldest English setter, exhibited a prey drive unlike anything I had ever experienced, even before his first birthday. I remembered there were distant places in Alaska where ptarmigan season remained open through April, after our Southcentral season closes at the end of March.

A 1,400-mile road trip seemed a small price to pay to extend Winchester’s season a bit. The first year we left home in the evening. I drove all night, while Winchester slumbered in the back seat and Christine tossed in fitful, not restful, sleep.

Cruising north on the Richardson Highway on a clear night with northern lights prancing across the mountaintops left us grateful before Winchester’s feathered feet had touched the ground.

Without knowing the country, when we arrived at what appeared a good spot, Winchester hit the ground running, his spirit inspiring us to follow while struggling to find the energy to keep up.

In the early years, Winchester covered an enormous amount of country and found plenty of birds. We took more in those days when the fire in our bellies drove us rather relentlessly. Christine once suggested that Winchester and my intensity might be a bit of a grind. In retrospect, she was right.

It took a couple of years of making the trip, hunting for a few hours and coming home wiped out, before we concluded that rushing through this gorgeous country with little thought beyond killing birds caused us to miss out on other opportunities.

In the ensuing years, we discovered the joy of taking time to enjoy spring in the Interior. We began spending one night at a place where the river outside our small cabin murmurs us to restful sleep, where Winchester is welcome, and we enjoy catching up with folks we haven’t seen for a year.

As has been the case my entire life, the morning starts early but now welcomes brief interruptions to stop and listen for drumming ruffed grouse in a couple of spots we’ve discovered over the years.

A flock of snow buntings appears and teases me to attempt to make their picture. In nine years of trying, I’ve made their photo a couple of times, and neither photo is worth sharing. But what fun they are in their spastic and seemingly purposeless pursuits.

We arrived a bit later than normal this year, but we found plenty of snow and temperatures cold enough at night to form a crust that Winchester could stay on top of. For us, snowshoes were still a necessity.

We had no illusions this year. We knew birds would be scarce. When their numbers are down in the fall, as they had been, they don’t make it over the winter. Releasing Winchester confirmed it.

Christine has studied Winchester’s movements, expressions and moods since he began hunting as a pup, and she reads him like a book. After watching him work the slopes for a bit, she said with a broad smile, “There may be one or two birds here. With no wind it may take him a bit to get a lock on one.”

The big smile that I mirrored came from knowing the show would be good, no matter how many birds came from it.

Over the years, a few folks have been in the field with us while Winchester does what he does. They will ask who trained him. I delight in replying that no one trained him. You can’t train a dog to do what he does, and I am grateful for understanding that early and leaving him to his ancestry and his drive to figure it out.

The way he works birds is magical. It’s impossible to describe adequately in words. But if you have patience and follow his lead, you’ll have an opportunity to shoot birds over his point. And if you don’t shoot, he won’t hold it against you. He doesn’t hold awful shooting against you either — good thing, as both Christine and I missed when he presented us the first opportunities.

Never minding his partner’s poor performance, he went on and found a pair of male rock ptarmigan, and this time the shots went true.

The temperature had softened the snow crust and it would no longer hold Winchester’s weight. The sun, too bright to waste, found us sitting and watching the mountain slopes around us. We were rewarded with a single-file line of caribou struggling their way through belly-deep snow to the bottom of the valley sprawled before us.

By evening, south on the trip home, we stopped at a rural sporting goods store we have grown fond of for the welcome when we have visited over the years. Later, sitting outside a familiar cabin set beside a barley field while Winchester slumbered, we watched and listened to the gaggle of Canada and speckle belly geese, mallards, pintails and trumpeter swans come and go.

Memories of a hunting road trip must include the rural cafes one finds along the way. Many are family-run and we have gotten to know some of the folks and always enjoy the brief breaks for our meals and a “puppy patty,” a single hamburger patty for Winchester.

On the last leg of our trip, we stopped at one of our favorite spots instead of going all the way home and having to cook. While placing our order with the owner, he stopped writing upon hearing a commotion in front of the café.

We followed him to the front door and watched while he refereed a fight between a pair of roosters. When they separated, we went back to our seats and he finished taking our order.

When he went into the kitchen, one of the roosters flew up and sat on the windowsill. A few moments later, their owner stuck his head out of the kitchen and saw the rooster in the window. He came out, holding up a finger as he went by. “Just one minute,” he said.

Christine and I watched in delight as he went outside and put his arms around the big bird, clearly consoling him. When he came back inside he said, “Sorry for the interruption. He lost the fight and feels bad.”

A miserable hunting trip? No, just the opposite, and looking forward to the next one.