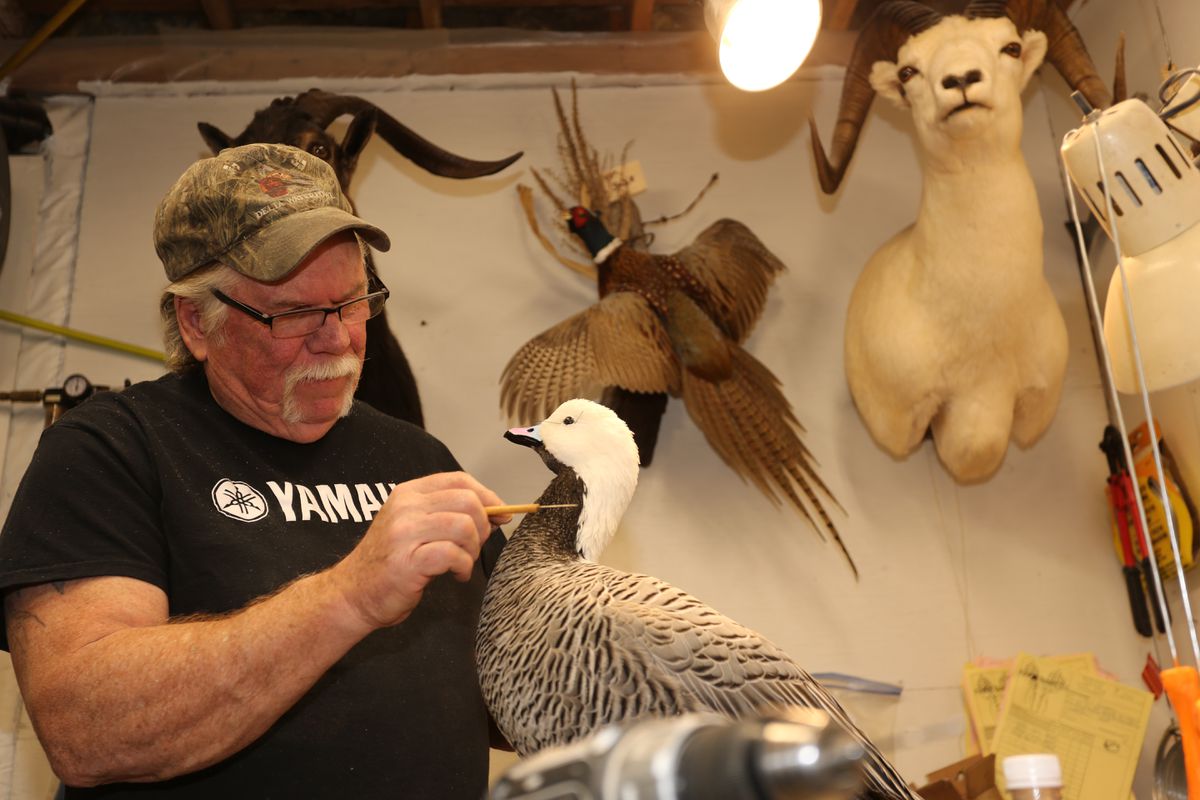 When I opened the door of a friend’s taxidermy shop, I was greeted by a bull moose at eye level. Its massive head hung from a beam just inside the door, the antlers extending the width of the entryway.

Rick Richardson’s workbenches are a sort of guarded mystery in plain sight. Almost like a section of forest, the longer you stay and examine the surroundings, the more orderly and interesting things appear.

Objects emerge as curiosities — a giant pair of preening tweezers, painted bills, bird feet. I had never stayed long enough to learn much about the taxidermy process — it’s easy enough to become absorbed by the mounts and conversation surrounding them to miss the work that goes into it.

While I was there to pick up caribou antlers, Rick said he had an emperor goose to mount. Few people get a chance to see this bird, which spends its entire life cycle in Alaska. I asked if I could watch.

In 2017, Alaska waterfowl hunters had the opportunity to hunt emperor geese for the first time in more than 30 years. The species had been protected from sport hunting since 1986, after a decline in population. Subsistence hunting was closed in 1987.

The population is now considered healthy enough to hunt — hunters may take one goose by permit in the fall-winter hunting season. A customary and traditional subsistence hunt takes place in the spring-summer.

It is still a sensitive population, and few hunters are able to travel to the remote areas open to hunting.

Because of its remoteness and beauty, the emperor goose is considered a “trophy” or “wall-worthy” bird.

I learned that many emperors taken in the early part of the season are not full-plumage birds suitable for a mount. I wanted to learn more about when and where it was best to hunt them in case I ever intended to have a bird mounted.

Over the next eight hours, I would have plenty of time to ask.

I held the emperor goose’s skull between my thumb and index finger, examining it from many angles but unable to make any comparisons because I’d never handled anything like it. I set the real skull next to the cast version, the bill freshly painted in pastel pink and blue.

I watched as Rick dipped a paintbrush in black paint and picked up the cast skull to paint the “grinpatch.” I grabbed my notebook to write the word as Rick described the dark area where the mandibles meet.

As if he could read my notes, he corrected me. “There’s no such thing as black in nature,” he said. He went on to explain the variety of browns and grays found in fur and feathers.

“What’s the hardest bill to paint?” I asked. My guess would be a king eider.

“Right now, it’s this one,” he said in gruff seriousness. Then he laughed, and I couldn’t help laughing with him — there’s a lot of pressure to not mess up. Preserving an individual bird is a humbling process.

He had let me paint the bird’s toenails. He had already painted the feet castings “mallard orange” and my job was to “do” the nails. I’m not good at painting my fingernails, and I usually only do it to hide dirt on camping trips, which works for a few days. This paint job was meant to last a lifetime or longer.

Steve had brought along Rigby, who found plenty to interest a young Labrador as if by osmosis. In his role as a teacher to all of us, Rick reminded our fat little pup that good taxidermy is just one reason to practice a soft bite.

My only impressions of emperor geese came from photos. One in particular depicted three adult geese, standing like sentinels of the north, icy white heads alert along the rocky shoreline of the Bering Sea.

The white paintbrush markings from the back of the bird’s head down the nape of its neck formed a question mark against the striking dark line that ran from the tip of the frosty pink beak down the front of the neck.

When Rick pulled the bird’s skin out of a tub of gasoline, where it had been after first being skinned and soaked in soap and water, it looked like the victim of an oil spill. The only clue it was an emperor was the white question mark.

It wasn’t until Rick covered the bird in ground corn cob and tumbled it dry that I saw its true colors. The steely gray and white. No matter how many photos I’ve seen, nothing compares to the unique beauty of a bird’s feathers in real life.

Rick straightened the feathers, grooming them with a pin and tweezers, feather by feather.

This bird had come from the Peninsula and was shot in November. Hunters had brought in a few early season birds, taken in September and October, that were immature.

“When I opened this up,” he said, pointing to the tumbler, “It looked like a pillowcase in there.”

The feathers from the juvenile birds had come off while tumbling and were not suitable to mount.

Rick had been reading taxidermy books before I was born more than 40 years ago. He did a lot of hunting and fishing, and taxidermy was something he wanted to learn. He taught himself by reading books and doing it on his own.

As he worked on the goose, he pointed out irregularities I would not have recognized. In two places, the bird had pure white feathers among the scaled gray plumage.

Although I have hunted ducks with Rick often, watching and listening as he groomed the bird’s feathers and painted its bill made me realize his authority came from his love and in-depth knowledge of waterfowl.

We talked about a blue-wing teal a hunter had brought into the shop. Rick interrupted his work to bring out the bird’s skull to show us the bill. He opened a drawer with hundreds of castings of different types of bird skulls from birds he had mounted over the years. Based on the bill measurements, he determined the bird was more likely a cinnamon teal — scientific knowledge in hunter drag.

Some may think taxidermy is morbid or that mounting a dead animal or bird to “put on a wall” is egotistic. The art of taxidermy represents a treasure chest of local knowledge that is not lost on those who visit these shops.

So many times I sift through the contents of a bird’s crop and wonder about what I find there. It is an unassembled story and world view I cannot translate but wish to understand. There is no research available about an individual bird, only its kind.

My single day did not cover the entire process — the bird was not yet finished when I left that evening. Rick would likely preen it over the course of many days.

I went home with a greater appreciation of emperor geese and the value of taxidermy, which goes far beyond preserving a specimen. It includes the attention, restorative work and knowledge of the taxidermist in bringing a creature back to life.