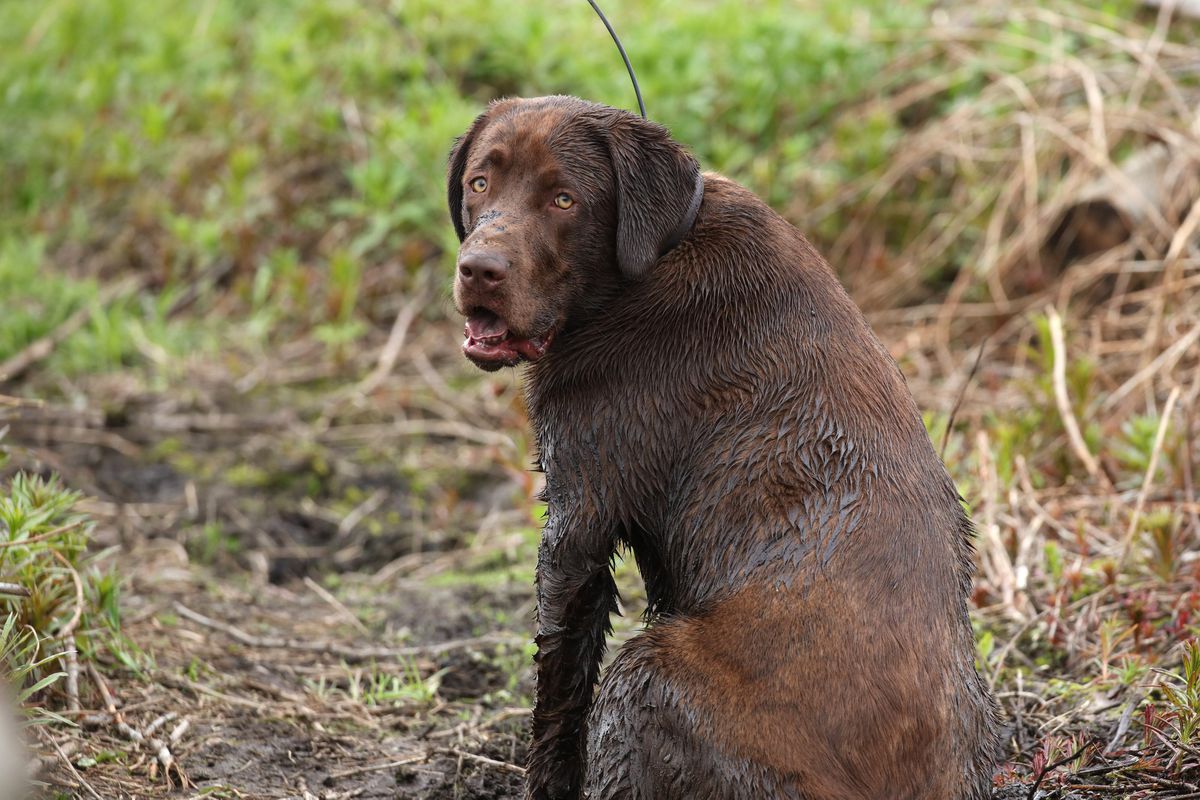 Rigby sports some mud on a hike in the area of the Swan Lake Fire on the Kenai Peninsula May 19, 2021. (Photo by Steve Meyer)

Rigby sports some mud on a hike in the area of the Swan Lake Fire on the Kenai Peninsula May 19, 2021. (Photo by Steve Meyer)

It’s hard to tell how dirty a brown dog is, but Rigby’s black tongue gave away his level of cleanliness.

By the end of our hike, he had indulged in every therapeutic mud bath he found along the trail. Each time he discovered a new wallow of blackish mud, we shook our heads and laughed. Sure, we had to drive home with him at some point, but his joy was contagious.

Hugo, a mostly white and orange speckled setter, ran as much as Rigby, the chocolate Lab, wallowed. It was easier to see Hugo’s level of cleanliness on a showy white coat — he only had black “socks” and a swath of black across his forehead where Rigby marked him with a swipe from his muddy tongue.

I counted 12 piles of black bear scat along the trail, but we did not see a bear that day.

The next time Steve and I hiked the same trail, the mud holes were dry. Rigby and Boss, Hugo’s littermate, were along with us. Both dogs stayed nearby, and I enjoyed Boss’s appreciation for views. He paused at lookout points, eyes bright, head casting to take in the skyline by scent and sight.

Meanwhile, Rigby rooted nearby like a truffle pig. It reminded me again how each dog is so different.

The Swan Lake Fire burned through this area, a small mountain within the 167,164-acre fire. The largest cottonwood tree we could see along the trail appeared to stand taller without vegetation around it.

I sat down on a rocky section of the trail to make a note in my journal. Boss sat next to me.

The way this particular tree had burned fascinated me. I don’t know enough about fires to guess how it happened, but the tree was mostly naked of its bark except for a loosened section still attached around its middle.

This loose bark resembled a tattered skirt, and the wind beat the bark against the tree’s body, making a hollow thumping sound. We also noticed charred tree roots wrapped around blackened rocks and a nest of half-roasted spruce cones.

The recovery of the burn area had already begun, with last season’s growth matted and dull next to this year’s bright green grasses and the first of the alpine flowers showing along the south-facing slopes.

Boss and Rigby stumbled across a spruce grouse on the way up, and I was glad to see it still had a home here.

Near the mountain base, a gray-looking bull moose with one growing antler browsed along the burned and growing spruce trees. The dogs didn’t pay any attention, I suppose because they are bird dogs, but I was glad to see him and think that the fire had improved moose habitat.

Growing up on the Kenai Peninsula, I had never liked this particular trail for being so overgrown. After the fire, I can’t seem to get enough of it.

Since it was not too difficult to hike, Steve and I decided to take Winchester, our oldest setter, who still loves the mountains even if his joints creak as much as the hollowed trees.

As we climbed, I saw a large burned stump ahead of us.

“For a second,” I said to Steve, “I thought that stump was a black bear.”

“That is a black bear,” Steve said.

We watched as the bear munched flowers. It was a young bear, and we would learn from hikers we met that they had spotted another young bear earlier, near the parking lot below.

The wind was in our favor, and this bear didn’t seem to pay us any attention. And Winchester did not seem interested in the bear at all. At first, he watched beside Steve, who had his camera, then he got disinterested and walked back to sit with me.

“I don’t think I’m a bear hunter either,” I told Winchester.

I’d been going on spring bear hunts in the mountains for the past five years and have never shot a bear. I like bear breakfast sausage, but I’m not much of a bear hunter.

If there is truth to these types, I’m mostly a bird hunter.

I’ve talked to other hunters who have had interesting things to say about hunting different types of game animals. A girlfriend told me her son preferred big-game hunting to small-game hunting because with big game, “one animal feeds you for a year,” while small game hunting requires many deaths.

Another hunter said he didn’t have the same emotional reaction to small game that he had when he shot a deer or moose.

I haven’t shared that dissonance based on size. I enjoy hunting birds with the dogs, whether it’s pointers and grouse or retrievers and ducks. I also like hunting caribou and moose, but I miss the dogs.

When it comes to bears, I’ve come to realize I may just not be a bear hunter. “Me either,” Winchester seems to say.

Our eight dogs — all Labs and English setters — are specialists without much versatility. Hugo points but won’t retrieve (and we haven’t insisted on it). Winchester can find any ptarmigan on the mountain, but won’t go near water. He even avoids puddles.

I don’t know what Rigby will hunt for. I suspect it will be waterfowl, but he also might be a botanist, who hunts with a close eye, or a forester, who only sees trees. Or, a Mud Engineer, who only sees the valuable properties of fluids.

It won’t matter to me what he likes or does best. I will be grateful enough to have him along.