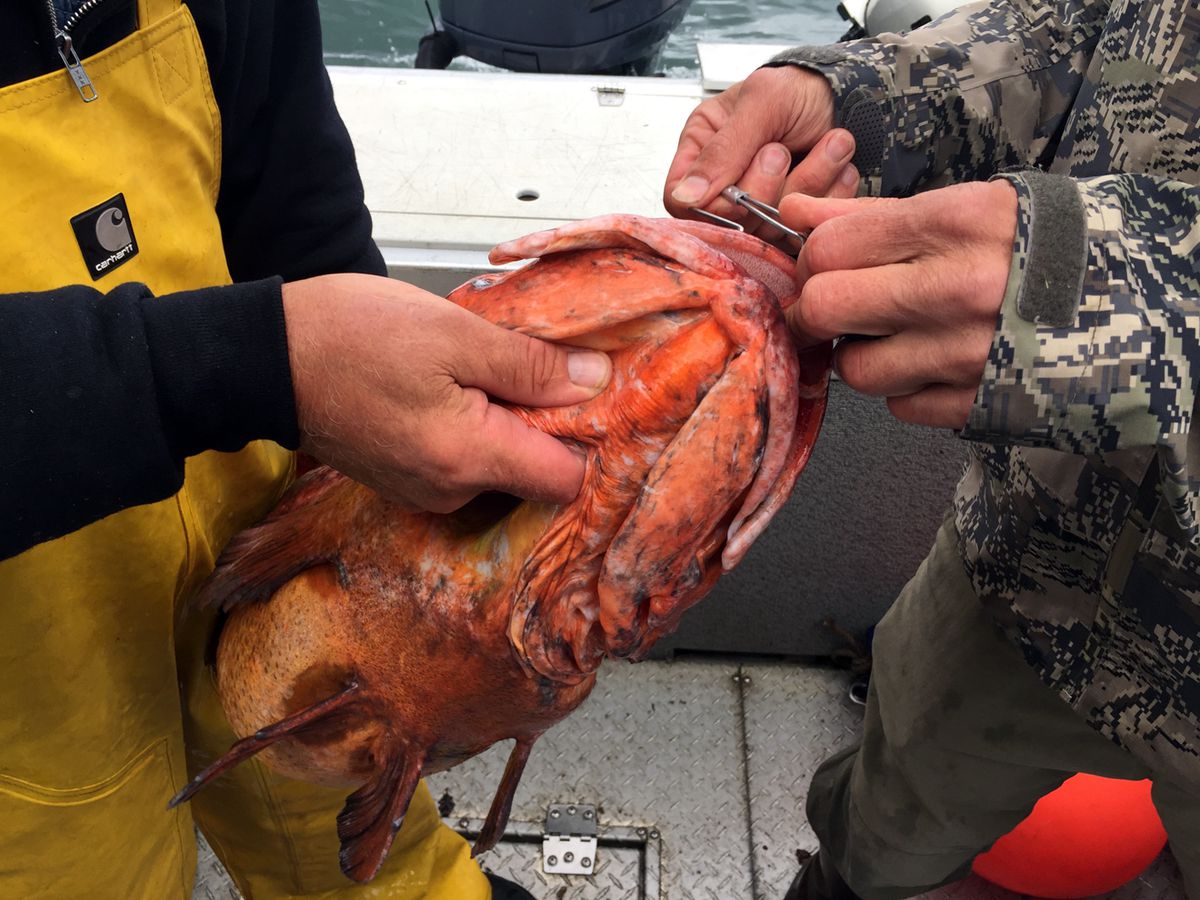 Ben Tweeten (left) and Chris Hanna attach a deep-water release tool to a yelloweye rockfish caught in McCarty Fjord in July. A weighted release device, like the one seen here, made by Russ Morrison of Soldotna, helps return the fish to the bottom quickly. (Cortni Brown)

Ben Tweeten (left) and Chris Hanna attach a deep-water release tool to a yelloweye rockfish caught in McCarty Fjord in July. A weighted release device, like the one seen here, made by Russ Morrison of Soldotna, helps return the fish to the bottom quickly. (Cortni Brown)

Russ Morrison loves rockfish. They're aggressive biters and put up a bouncy, head-shaking fight. With their mohawk spines, sea-monster maws and rainbow of vibrant colors, they're as much fun to look at as they are to catch. And the taste? Some prefer it to halibut — yelloweye in particular.

That said, Morrison, of Soldotna, goes out of his way not to kill them. If he keeps three yelloweye a year, it feels extravagant.

"I'm pretty careful with them. As a rule, when we get a yelloweye we get out of that area. I don't want to sit there and continue to pound them," he said.

Morrison hasn't always felt that way. Growing up a fishing fanatic in Puyallup, Washington, he'd reel and retain whatever his hook would hit and regulations would allow.

But watching the effects of overfishing in Washington during the 1970s and 1980s gave him a different perspective. Conservation gained importance.

Although there are many different kinds of rockfish, the numbers of some varieties aren't robust.

Rockfish that live in sheltered waters — including yelloweye, silvergray, China and quillback — are sensitive populations. These bottom-dwellers like to bite and tend to stay in the same area, making them easy to catch. But they're slow to reproduce. Some can live longer than 100 years without becoming reproductively mature until they hit 17 to 30.

Since they live in deep water, rockfish aren't likely to survive catch-and-release fishing. They've got a swim bladder that regulates buoyancy, and the gasses in the bladder expand when the fish is brought up from the depths.

"It's just like you coming up from the depths, you're going to explode. Your lungs are going to come out of your mouth," Morrison said. "Essentially, it's the same thing."

In human divers, it's called the bends. In rockfish and other deep-water species, it's called barotrauma, and it's quite dramatic — bulging eyes, stomach protruding out the mouth, skin stretched tight.

When Morrison fished Puget Sound as a kid, barotrauma was presumed fatal. If well-meaning anglers wanted to release a rockfish alive, the common practice was to puncture the fish to release the gasses before throwing it back. That would indeed make the fish sink, but any resulting infections would probably kill it anyway.

"They assumed the fish were dead, and at that time they weren't worried about it," Morrison said.

That's no longer the case. Certain species of rockfish cannot be kept in areas of Washington, Oregon and California where populations are struggling due to overharvest.

In Alaska, bag limits are limited and the Alaska Department of Fish and Game recommends avoiding incidental catch of rockfish. If a rockfish is caught but not intended for harvest, release is recommended. But the fish must be released at depth.

Fish and Game conducted a three-year study in Prince William Sound on how many rockfish survive release. The survival rate of yelloweye released at the surface was found to be only 22 percent, while the survival rate if released down where they were caught soared to 99 percent. And subsequent recaptures found that at least some of those fish went on to reproduce.

"There are some damages, possibly long-term. But as far as we can tell the damage is minimal. They reproduce. They're hardy fish, they really are, but not if they're just let go on the surface," said Brittany Blain, assistant area manager for Anchorage, Prince William Sound and the North Gulf Coast, a technician on the study.

Fish and Game recommends minimizing time at the surface by reeling up and quickly returning the fish to the depth at which it was caught, attached with a circle hook to a lead-head jig.

For Morrison, the method had appeal but the means seemed clunky. He's become more conservation-minded about rockfish since retiring and moving his family to Soldotna in 1989. An incident about three years ago got the engineering side of his brain reeling.

His was fishing with family in Sitka, including grandson Bradley, and brought up a rockfish suffering from barotrauma.

"And (Bradley) asked, 'What happened? Why can't those fish go back down?' And we told him, 'They can't go back down because of their air bladder.' And he said, 'Isn't that kind of a waste?' And it was, 'Bing!  I've got to do something. If a 7-year-old kid can figure out it's a waste, something's got to change,' " Morrison said.

At that time, he hadn't seen any deep-water release devices he liked, so he decided to make his own.

He spent days bending wire in his garage, followed by testing in Seward and a round of refining. In the end, he created his Deep Water Fish Release tool, from Yeldarb Ent. (Bradley spelled backward). He made it with heavier wire than others he's seen, and a sturdy closure so the fish can't slide off until intentionally released.

The device looks like an oversized hitch pin clip. Place the shaft through the fish's lip, attach a weight to the bottom, run the line back down and jerk a couple of times to free the fish when it's on the bottom. The device can be placed inline, so an angler can keep fishing without having to reel up and re-rig.

So far, Morrison's device is on sale at Trustworthy Hardware and Fishing in Soldotna, The Sport Shed and Redden Marine in Homer and The Fishing Hole in Seward, as well as a few locations in Washington and Canada.

"Ideally, I'd like to make a million bucks on them," Morrison joked.

More idealistically, he'd like to see deep-water release become required for rockfish anglers throughout Alaska. It's required for guides in Southeast and strongly recommended elsewhere.

But since it isn't mandatory in most places, Morrison is hoping awareness will inspire the adoption of conservation-minded practices, even if it's not the law.

"It's just a matter of getting educated about putting the fish back, the awareness of what the problem is. Joe Fisherman … may not be aware that rockfish can be put back. When they are, 99 percent of them will say, 'Yeah, I'll take (a release tool),' because they'll put the fish back," he said.

Blain can attest to that. She meets anglers who still think a swollen rockfish is a dead rockfish.

"I talked to a guy the other day. He said, 'Yeah, we actually kept over our limit of yelloweye because they were dead.' I said, 'Well, how do you know they were dead?' 'Oh, their eyes were popped out, their stomachs were popped out.' But I have seen it firsthand. I have caught fish with their eyes popped out, stomach popped out of their mouth, and put them back down and caught them again the next year. They'll live. That's where deep-water release comes in. So it's like, 'Why not?' "

Rules are tricky, so be sure to consult Alaska Department of Fish and Game regulations for rockfish bag limits before fishing.