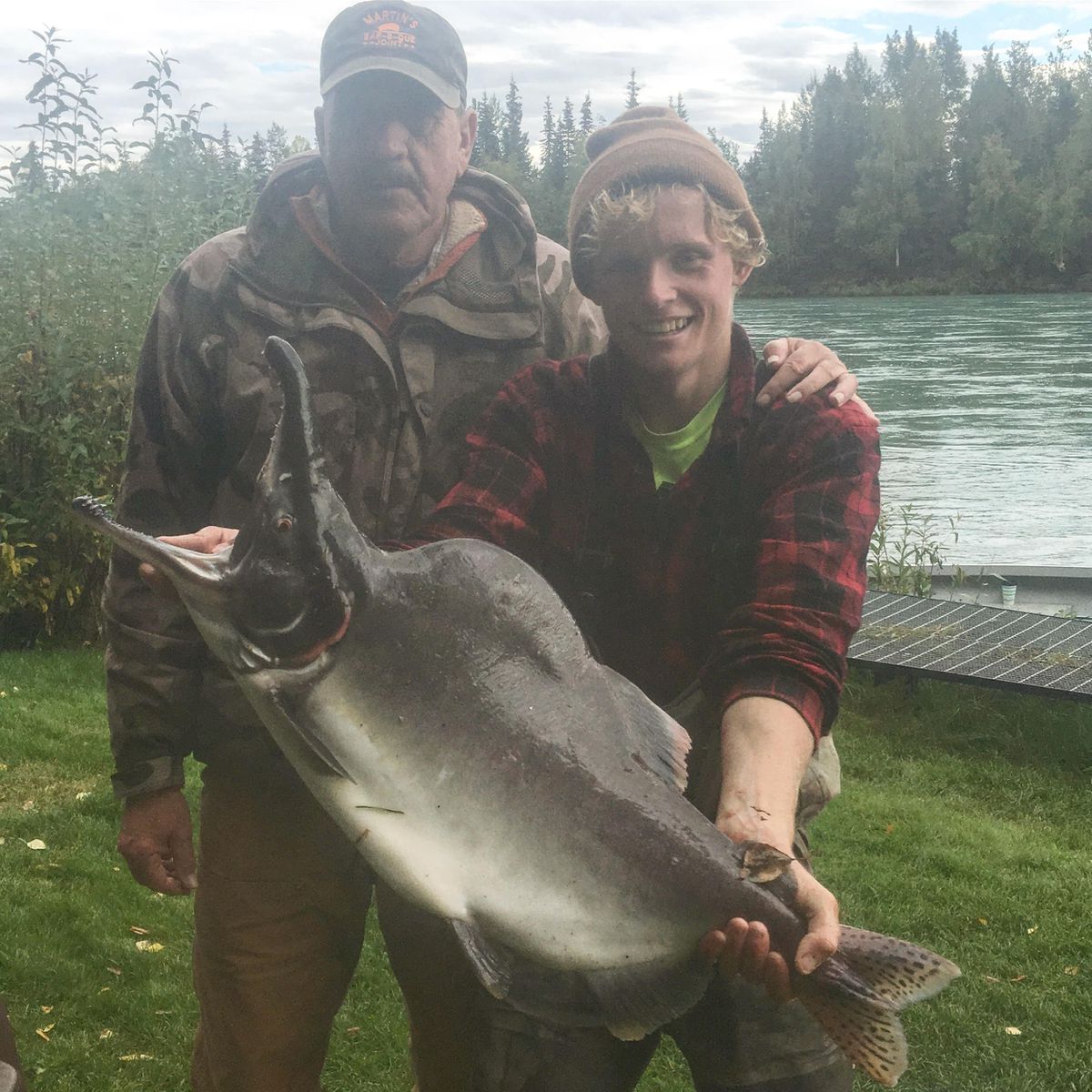 Boaz Sessom, a guide at Anglers Lodge, holds a 13-pound,10.6-ounce pink salmon caught by Robert Dubar on the Kenai River on Tuesday. Dubar said he plans to get the fish mounted. (Courtesy Anglers Lodge)

Boaz Sessom, a guide at Anglers Lodge, holds a 13-pound,10.6-ounce pink salmon caught by Robert Dubar on the Kenai River on Tuesday. Dubar said he plans to get the fish mounted. (Courtesy Anglers Lodge)

After 42 years, the Alaska state record for a sport-caught pink salmon was broken this week. Twice.

Thomas Salas hauled a monster pink salmon out of the Kenai River near Big Eddy in Soldotna on Monday night. The California resident, who said he visits the Kenai every other year or so, was originally going to throw it back when a friend told him to hang on to it.

Turns out the friend was right. When the anglers took the fish to the Alaska Department of Fish and Game office in Soldotna on Tuesday morning, the 28.5-inch long fish weighed 12 pounds, 13 ounces, claiming the state record from the previous 12-pound, 9-ounce fish caught on the Moose River in 1974.

Multiple biologists certified it and sent Salas on his way, the new holder of the state record.

About three hours later, Robert Dubar brought in his humongous pink salmon. He'd pulled the monster out of the Kenai River just downstream of Angler's Lodge in Sterling on Tuesday morning.

"I thought it was hooked on a log," Dubar said. "Then it started moving a little bit. Took about five minutes to get him to the shore."

Dubar, who is visiting the Kenai Peninsula from Incline Village, Nevada, brought the pink salmon into the Fish and Game office early Tuesday afternoon. The biologists there again took its weight and measurements and certified it — 13 pounds, 10.6 ounces and 32 inches long. A new state record.

Salas took the news with a laugh.

"Really?" he said. "Another guy caught a bigger fish?"

Fish and Game certifies and seals particularly big fish caught by sport anglers through its trophy fish program. For pink salmon, the minimum weight to qualify is 8 pounds. Entries have to be weighed in the presence of witnesses and a trophy-fish official on a certified scale. Catch-and-release fish can qualify for an honorary certificate as long as the angler doesn't remove the fish from the water and someone gets a photo of it. Honorary certificates are measured by length.

The previous state record was held by Steven A. Lee. According to the International Game Fish Association, the world record is a 14-pound, 13-ounce pink caught 15 years ago in Monroe, Washington.

Anglers have been catching enormous pink salmon in the Kenai River this season, said Jason Pawluk, the acting area management biologist for the Division of Sportfish in Soldotna.

"I have lost track of how many pinks have been brought in this year for our trophy program, and that's a pink over 8 pounds," Pawluk said.

Ryan Ragan, a public information officer at Fish and Game, said his department has received 12 trophy-fish affidavits for pink salmon caught on the Kenai this year.

Commercial fishermen began reporting early in the season that the pink salmon were large, but the average has been consistently increasing throughout the season. The Kenai River experiences high even-year pink salmon runs, but these are some of the largest anglers recall seeing.

"We've observed this in the in-river sport fishery and confirmed for sure in the commercial fishery," Pawluk said. "The pound average per fish is an order of magnitude difference than it has been in previous years."

The reason for the larger size isn't really clear. Low pink salmon runs have been a mystery in Prince William Sound, Kodiak and Southeast Alaska this year — managers have suggested ocean temperatures as a possible cause. The pink salmon have been larger than usual in Kodiak as well.

Pawluk said it's still uncertain how large the run is, but the trend of larger fish is clear.

"It's possible there's still a record fish out there," he said.

Elizabeth Earl is a reporter at the Peninsula Clarion, where this article first appeared. Reach her at elizabeth.earl@peninsulaclarion.com.