Alone with my salmon in the always-crowded Russian River sanctuary 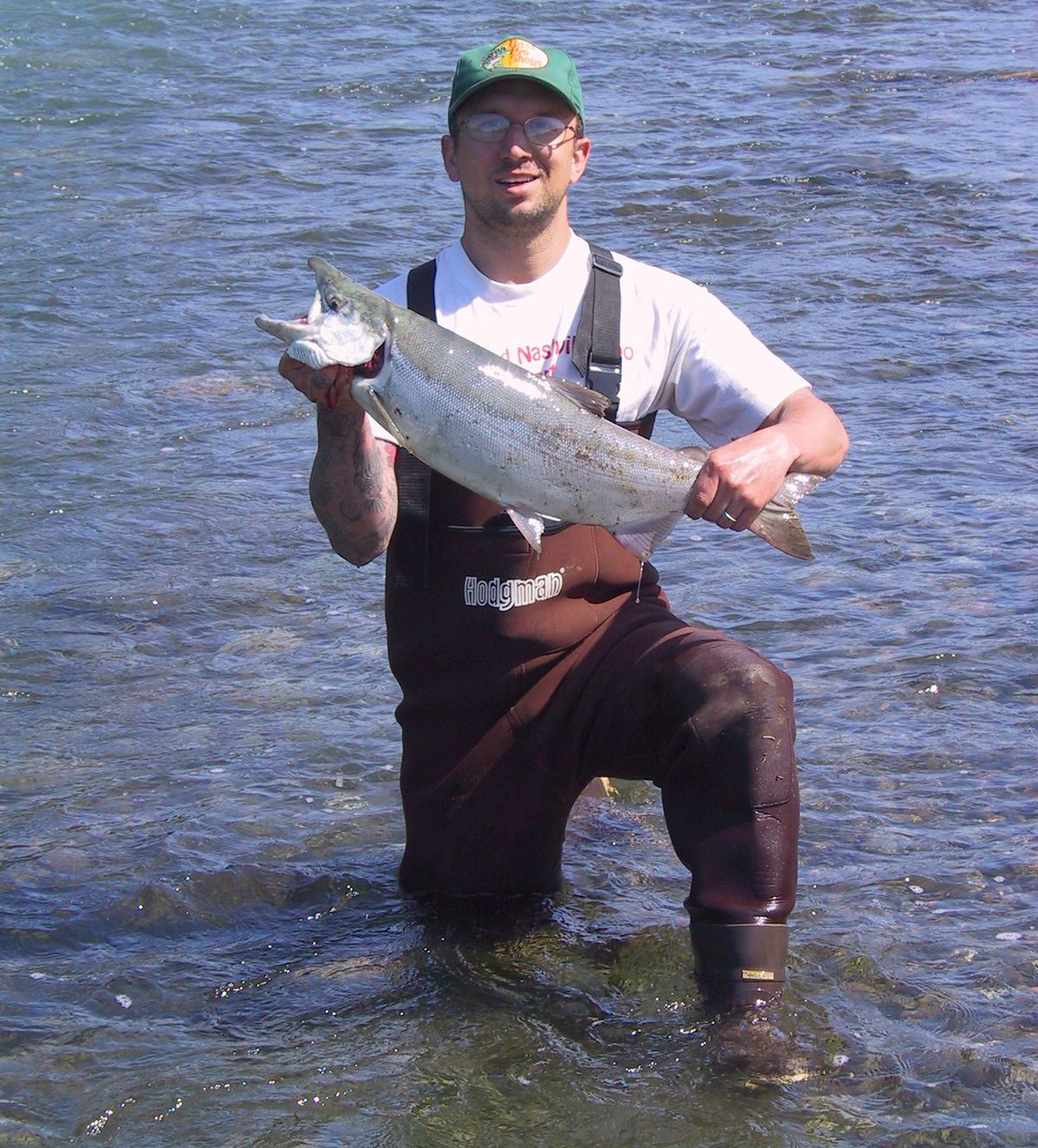 A 20-something Joseph Robertia just after landing an 8-pound red salmon in the Russian River sanctuary about 15 years ago. (Courtesy Joseph Robertia)

A 20-something Joseph Robertia just after landing an 8-pound red salmon in the Russian River sanctuary about 15 years ago. (Courtesy Joseph Robertia)

Like many new Alaskans, the turquoise waters of the Kenai River – and the promise of what swims a thousand strong just below the surface – called to me.

Getting up in the dark, I made the long haul from town sipping a steaming mug of coffee with the soft pink light of dawn breaking on the horizon as my only companion.
Arriving, my nose filled with the scent of spruce and other forest freshness, and my eyes panned over every inch of the majestic Kenai Mountains, the tallest of which were still crowned in last season’s snow. I felt more alive than I had in years and I hadn’t even wet a hook.
Many first-year folks can lay claim to the same feeling of rapture, but I’d wager none can claim the rest of this story.

This is because unlike many who fish for early run sockeye in the piscatorially promising sanctuary area just below the confluence where the Russian River meets the Kenai, and who stand shoulder-to-shoulder in the hope of flossing a fish, I had the entire stretch of pristine river entirely to myself.

Hard to believe, I know, since the sanctuary is an area so thoroughly congested from June to August that it spawned the term “combat fishing,” but it’s true. And I have a stringer full of serendipitous events to thank for my sockeye-chasing solitude.

It began like many great Alaska adventure tales – with a bear, three of them, in fact, juvenile brown bears that had been making themselves a little too known throughout that summer.
The trio was in its first year away from mom and must have figured out early that fishermen were easy marks, and their daily bag limit of three fish often sitting on shore next to them were an even easier meal.
It was my day off from the local newspaper and I had been whipping the water for more than an hour with little to show for it. I chalked up my poor performance to the several hundred anglers on either side of me, but the bruins changed all that.
The first sighting anyone had of them was when the three descended the steep bank all around me. They immediately began ripping apart and sharing a lunch the guy next to me had packed for himself, so I and everyone else took advantage of their momentary sandwich break and moved away as swiftly as we could without running, reeling in our lines as we fled.
Several state and federal wildlife officers were already on the scene since the bears had become a bit of a nuisance in the area, and they declared a wide berth was not enough and ordered everyone to clear out.
The fishermen were ferried to the far side, but because I always packed a reporting pad and camera everywhere, I asked one of the wildlife officers if I could stick with them and net a story out of the situation.
He shrugged in begrudging approval, so for the next 15 to 20 minutes we watched the bears work their way up and down the shoreline looking for even the tiniest morsels that had been left behind. They finally pushed on, climbing back up the bank and disappearing into the waist-high fireweed and dense spruce.
Not sure if the trio would return, the officials decided the best course of action to keep everyone safe was to leave fishermen on the other side of the Kenai River for a while longer. I, too, continued to monitor the scene from the exciting side.
Time passed. After 15 minutes my heart rate finally returned to normal, after 30 minutes I grew bored and after 45 minutes I finally had the nerve to ask if I could go back to fishing.
To my surprise – since I was half-kidding when I asked – the wildlife officer again expressed his indifference, which I took as not a hard no. I waded back into the cool, fast-flowing water and within minutes of flipping my chartreuse fly I felt a fish on.

Normally the protocol in this overcrowded area is to muscle the fish to shore as quickly as possible to not risk tangling up with any of the dozens of anglers nearby, but having the good fortune of being solo, I savored the fish – and the fishing – the way every angler hopes to when they first dream of fishing in Alaska.
I took my time, walking up and down the stream depending on where the fish sped on its many long runs, and I kept the line taut when it occasionally burst from the water to dance across the surface in a shimmer of silver.
All the while I could hear the spectating audience on the far side. Some cheered for me, some jeered at me, at least one shouted they hoped the bear would come back and eat me. I didn’t care. I was lost in the moment, completely focused on the task at hand and feeling that ancient connection that occurs in the battle between man and fish, which I eventually won. The sockeye was a glorious salmon, a solid 8-pounder and still as bright as if I had caught it in the sea.
Living in a state of superlatives and taking part in a sport where bragging is almost as essential as the tackle itself, that’s something to really crow about. Not the size of the fish, but that I had done something few before me, and I would wager no one since, can claim: I stalked the sanctuary, alone, in midsummer.
The experience was not only fishing at its best, but Alaska at its best too, and that is why to this day – more than 15 years later – the events of that morning still stand out as one of my favorite fishing memories.

Joseph Robertia is a freelance writer living in Kasilof, where he and his wife operate Rogues Gallery Kennel. Joseph’s first book, “Life with Forty Dogs,” published by Alaska Northwest Publishing, was released in April.