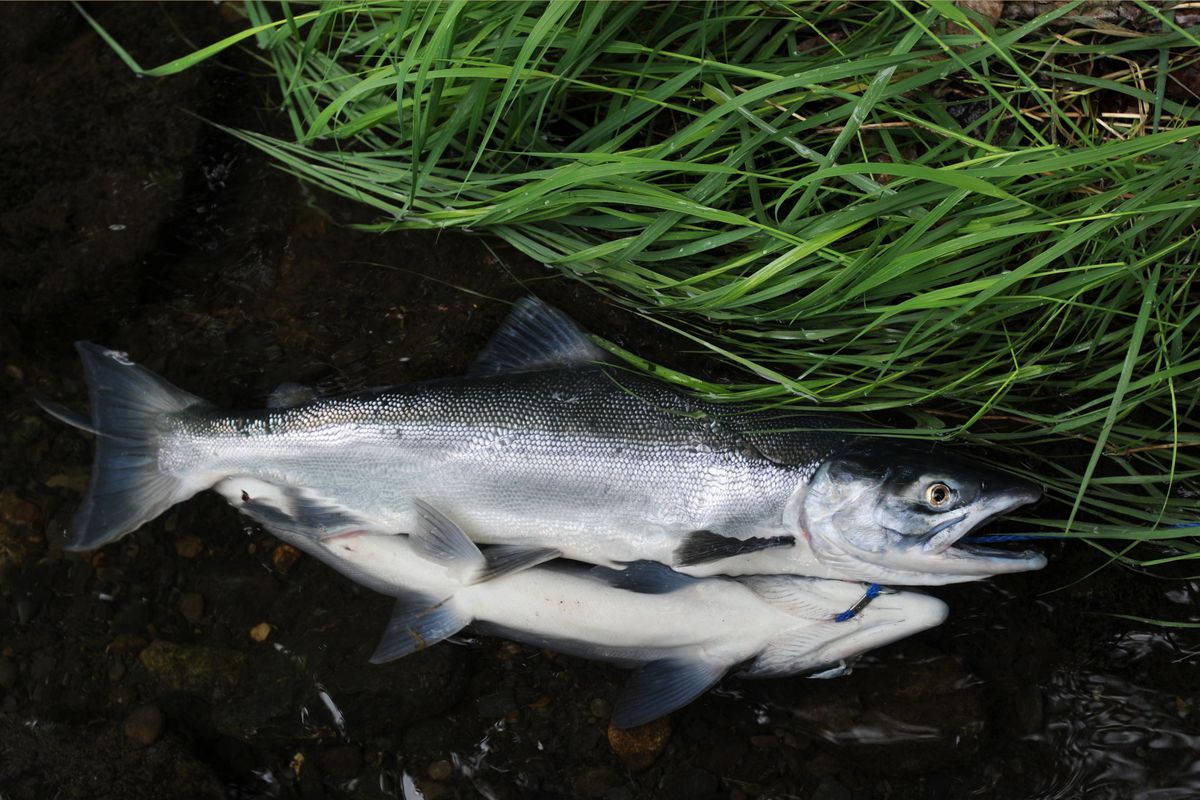 Stringers of fresh red salmon line the banks of the Russian River during the 2015 season.

Stringers of fresh red salmon line the banks of the Russian River during the 2015 season.

Early indicators suggest the early red salmon run in the popular Russian River could be a bonanza, considerably larger than the last three years.

Fishing opens Sunday in the gin-clear river, one of Alaska's most popular sport fisheries, as well as the upper Kenai River.

With the simultaneous reopening of rainbow trout fishing in those waterways as well — after an angling stoppage to give the fish time to spawn — Sunday is something of a Southcentral Super Bowl of fishing.

"(Monday) we installed the fish weir and everything went smoothly as usual," said Jason Pawluk, assistant area management biologist for Fish and Game in Soldotna. "We were fish tight as of (Monday) night. We did see a couple of sockeye moving around the weir, and we checked the falls on our way out and saw about 20 fish milling in the calm waters."

Pawluk followed up Tuesday with another foot survey of the area and found the low, clear water teeming with fish.

"We estimated about 1,000 sockeye between the White Trail and the confluence," he said. "There were also about 500 holding in the sanctuary. Reports are that there are a lot of fish holding below Skilak Lake.

Initially, the Alaska Department of Fish and Game's forecast for sockeye salmon was 41 million, or 12 million fewer than last year. However, based on these inaugural real-time findings, Pawluk said there is a strong prospect this run is either early or larger than the forecast.

"Also, I just read the Karluk and Buskin rivers (on Kodiak Island) emergency orders, which liberalized the sockeye bag limits due to high sockeye passages," he said. "Catches in the Copper River commercial fishery I think are ahead of projections, so other systems around Southcentral are seeing larger-than-expected sockeye runs. We'll see if this holds true for the Russian."

[Alone with my salmon in the always-crowded Russian River sanctuary]

Fish and Game doesn't do a formal forecast for early run Russian River sockeye. There are two big pulses of reds each summer, with the late run typically the biggest. Their informal early-run forecast is for approximately 60,000 sockeye.

"Our average exploitation rate of early run sockeye based on the statewide harvest survey data is approximately 45-50 percent. So if the forecast is realized we would expect an escapement around 30-33,000 fish, right in the middle of our escapement goal range of 22-44,000 fish," Pawluk said.

The escapement goal for early run Russian River sockeyes is one of the more rigorous goals, requiring data going back decades. Salmon population information has been collected at the Russian since the early 1960s.

"One key element that has most led to an increase in the escapement goal range is the installation of the fish pass in 1979," Pawluk added. It gives returning salmon unrestricted passage around the falls without being beaten back or stopped by an often-high-velocity section of the river.

Early run Russian River sockeye are genetically distinctive, standing out from most populations in the state, Pawluk said. But like all salmon, they spend a portion their life in fresh water and a portion in salt water.

After a half-year in gravel, juveniles rear in the freshwater of the Russian Lakes for a year or two before heading out to sea. They spend two to three years in the ocean before returning to the Russian to spawn in Upper Russian Creek (Goat Creek), Pawluk said.

Anglers should remember that the Russian River area is fly-fishing only, and retention of fish hooked anywhere other than the mouth is illegal. The bag limit is three sockeye per day, six in possession.

Anglers are also asked to remember this area is bear country, so all possessions, including fish on a stringer, should be kept close by. Cleaned fish carcasses should be chopped up and the smaller pieces thrown into fast-flowing current.