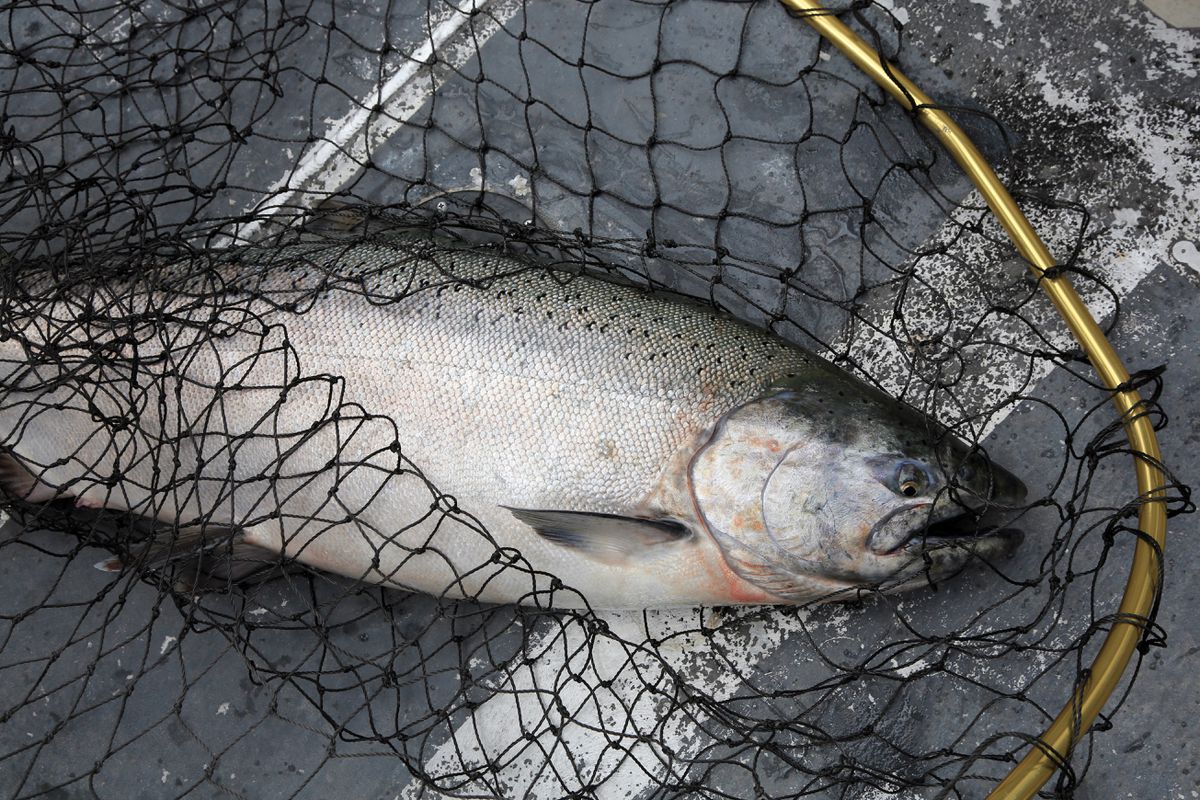 A dime-bright and chunky Kenai River king salmon. The fish likely spent four years in the ocean before returning to spawn. Fewer and fewer “four-ocean” and “five-ocean” fish have been returning to the Kenai River in recent years. (Mike Chihuly file photo)

A dime-bright and chunky Kenai River king salmon. The fish likely spent four years in the ocean before returning to spawn. Fewer and fewer “four-ocean” and “five-ocean” fish have been returning to the Kenai River in recent years. (Mike Chihuly file photo)

In the midst of a strong early run of king salmon to the Kenai River, state biologists are allowing anglers to harvest larger chinooks the rest of the month.

Effective at midnight Monday, anglers can take kings up to 46 inches; typically, that's a fish of 35-40 pounds. So far this season, the limit has been 36 inches, about an 18-20 pound fish. The early run ends June 30.

Alaska Department of Fish and Game biologists are attempting to rebuild the Kenai king run that has struggled for at least a decade.

As of Sunday, the sonar at river Mile 14 had counted 4,010 large kings. That's already in the range of 3,900-6,600 fish biologists want to see escape anglers and reach their spawning grounds, largely in Kenai River tributaries.

If this run proves typical, about half of the kings should have passed the sonar by now.

But there's a big difference between how biologists are counting this run compared to past years. Previously, the sonar counted kings of all sizes. This year, only kings 34 inches or larger are being tabulated. So how many smaller kings counted in previous runs are passing uncounted this year?

"I would say at least hundreds, probably thousands," said Brian Marston, the area management biologist for Fish and Game. "You're looking at several thousand by the time the run is done."

"Even after taking into consideration the projected sport fish harvest above the sonar site, including catch-and-release mortality, the escapement goal … will exceed 7,660 large fish, which is well above the established goal," Marston wrote in a press release.

In its weekly fishing report, Fish and Game last week labeled Kenai River king fishing as "excellent" — a term rarely applied to Southcentral king for much of the last decade.

The Kenai gets two king runs — fish that spawn in different places. The second begins July 1, when it's legal to take a king of any size. Most years, the second run is larger and also produces more big fish. But Marston said he'd already heard an unconfirmed report of one 70-pound king caught — and released — during the early run. And king salmon anglers with a sense of history will recall that Les Anderson caught the world record 97-pound king during May of 1985.

In any case, this year stands in marked contrast to dismal runs as recently as 2013 and 2014 when no king fishing was permitted in May and June to protect the few spawners.

"Little by little, we're dying," longtime guide Greg Brush said in 2014. "If I stop to think about this, it's scary."

But finally, perhaps, the tide has turned.

Anyone entering the summer-long Valdez Halibut Derby in this period is automatically entered.

On opening day, Fairbanks angler Eli Ludwig landed a 143-pound halibut to take the lead in both contests.

In Seward's month-long halibut tournament, Seth Price of Anchorage leads the way with a 138-pound flatfish caught June 9 aboard the Silver Lining.