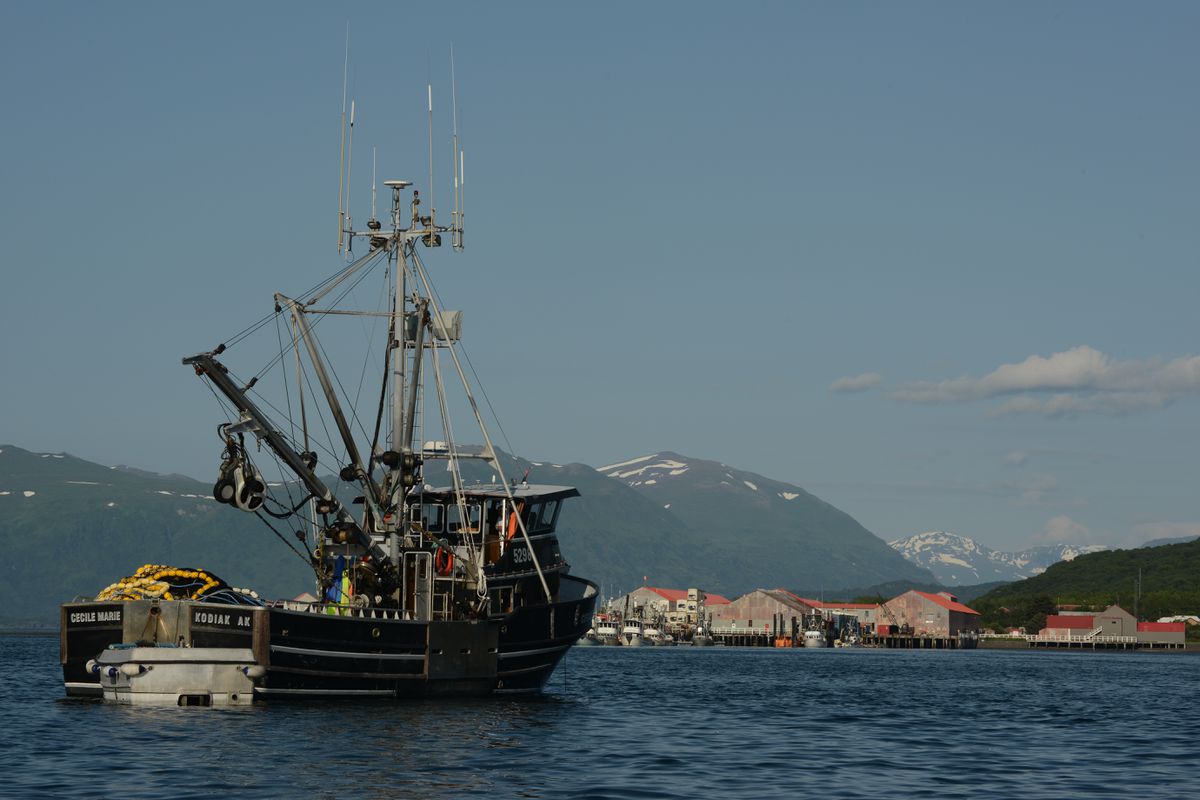 The seiner Cecile Marie moves through the bay near the Larsen Bay cannery on July 12, 2017. (Anne Raup / ADN)

The seiner Cecile Marie moves through the bay near the Larsen Bay cannery on July 12, 2017. (Anne Raup / ADN)

The most common piece of gear on a seine vessel is also one of the deadliest — the rotating capstan winch used for winding ropes. Anyone who has ever worked aboard a seiner has horror stories of close calls, or worse.

"The deck winch is the most powerful thing on the boat. It's the scariest piece of machinery that we work with. My feeling when I was caught in it was that I was completely helpless. There was nothing I could do," said fisherman Noah Doncette, who participated in a video for the National Institute of Occupational Safety and Health (NIOSH) called "The Most Powerful Thing."

"The corner of my raincoat caught under the capstan and started wrapping around. It snapped my head back and broke my neck," said Randy Dobrylnia.

"I was lifting the ring and I reached over with a pair of nylon gloves. My arm went down and started going around again and again. Then it jammed me against the deck and started to pull my arm off. It all happened in seconds," said Gunnar Neilson.

A simple device called an E-Stop has been available for more than 10 years to prevent deck winch injuries.

"It's a button that can be put on the horn of a capstan winch on a seiner. When the button is hit, it triggers a solenoid valve that stops the flow of hydraulic fluid to the winch and locks the capstan in place to prevent further entanglements," said Ted Teske, a NIOSH health communications specialist who invented the device.

"It was in response to guys being wrapped in the winch and being pulled away from the controls back at the wheelhouse. This gives them an option right on the winch itself to lock the device and keep them from getting further injured," he explained.

Between 2000 and 2014, there were 16 fatalities from winch entanglements in the U.S. In 41 percent of the cases, loose clothing or gloves were cited as the first thing getting entangled in the gear.

But fishermen have been slow to adopt the devices aboard their seiners. In the Northwest and Alaska, only 50 to 60 E-Stops are being used out of a fleet of about 1,500 boats.

Teske and his team are determined to find out why.

"We are interested in talking to any seiners who have either installed one and what was the tipping point, and their experience using it, as well as guys who have considered it and did not install an E-Stop. Both perspectives are extremely valuable for us," Teske said. "If we can identify the barriers, we can address them through other types of interventions – whether it's risk awareness or developing rebate programs, or talking with insurance companies to see if they might offer a lower rate for installing safety equipment on their boats."

In a major success story for NIOSH's Research to Practice initiative, all three major manufacturers in the Northwest now provide E-Stops as standard features on their new seine winches. Retrofits for older boasts cost around $3,800.

The E-Stop outreach is part of a new multi-year NIOSH project to increase adoption of deck safety interventions in fisheries. Contact Ted Teske at tteske@cdc.gov.

Ocean awareness challenge: "Our oceans in a changing climate" is the theme for the 7th annual Bow Sea Ocean Awareness program, an online contest for kids aged 11 to 18 around the globe.

The goal of the program is to create a generation of ocean advocates, said founder and president Linda Cabot, who created the program based on three guiding principles.

"One was my love for the ocean and coastal communities. The second was a belief that youth have the power to change society. The third was to understand that art and creative literacy is a very powerful and necessary skill," Cabot explained.

She believes there is a general lack of education about the world's changing oceans and was inspired to get young people involved by having them express environmental impacts through creative arts.

Students are encouraged to submit entries individually or in groups in writing, art, poetry, film and music.

"It can be self-driven, or teachers can use it as projects in their classrooms," said program director Alyssa Irizarry, adding that submissions in multiple categories are welcomed.

Last year's contest attracted entries from 63 countries and 48 U.S. states, including several from Alaska. Irizarry said the ways in which the kids connected with ocean issues through their research and arts was "astounding."

"They are connecting emotionally and then becoming leaders in advocating for raising awareness and finding solutions," she said.

The program provides online resources and tools for students and teachers, along with a gallery featuring past winners.

Cash prizes ranging from $100 to $1,500 are awarded in two divisions, along with $750 sponsor recognition awards.

Deadline to enter the Ocean Awareness Student Contest is June 18. Get more information at fromthebowseat.com.

Expo ideas: The call is out for compelling ideas and speakers for Pacific Marine Expo, the largest commercial marine trade show on the West Coast which marks its 52nd year this November in Seattle. Topics can include but are not limited to safety, technology, marketing, boat building, climate change and more.

"We strive to provide the most critical information and education every year and an important piece is hearing directly from mariners and service providers in the industry. The feedback provided in the call for proposals lets us know exactly what's important to our customers. We encourage you to be creative and think outside the box!" said Denielle Christensen, expo director. The deadline for submissions is March 16. Visit pacificmarineexpo.com.

Grants give back: The Alaskan Leader Foundation is accepting applications from nonprofits and projects for its annual grant giveaways in Kodiak and Bristol Bay. Funding typically goes to programs such as food banks, shelters, educational and youth programs, museums and recycling efforts.

The Alaskan Leader Foundation was founded in 2000 by six Kodiak fishing families and was joined in 2007 by the Bristol Bay Economic Development Foundation. Since 2009, the group has donated nearly $600,000 to local projects. The deadline to apply is March 30. For an application, contact Linda Kozak at 907-539-5585 or lkozak@gci.net.