Thousands of salmon dipnetters are crowding Kenai beaches, most from out of town. Here’s how to be a good guest. 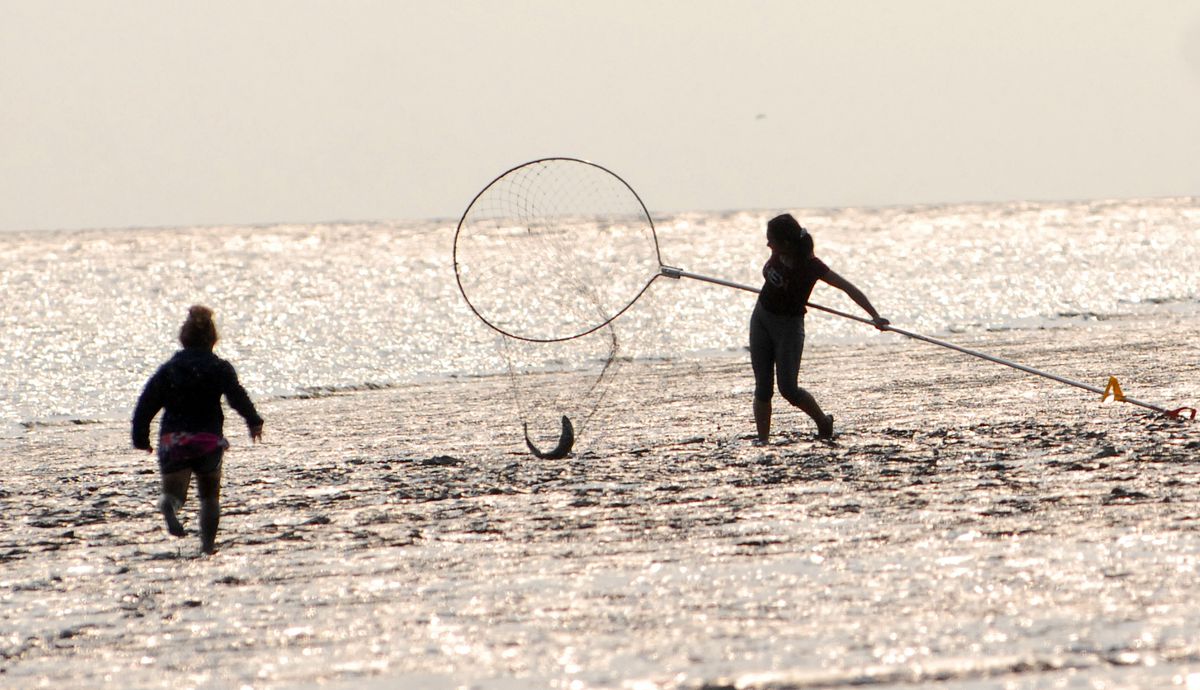 People dipnet for sockeye salmon at the mouth of the Kenai River on Wednesday, July 10, 2019. (Matt Tunseth / ADN)

People dipnet for sockeye salmon at the mouth of the Kenai River on Wednesday, July 10, 2019. (Matt Tunseth / ADN)

KENAI — Kenai has reluctantly come to embrace the massive dipnet salmon fishery that takes place every July on the city’s beaches, but locals say they’d like visitors to know a few things before hitting the beach.

“The main thing is to respect the beaches,” Kenai City Manager Paul Ostrander said in advance of the fishery, which began July 10 and runs through the end of the month. “This is our home and we use these beaches 11 months of the year and are happy to share them. But treat them like your own.”

The city places dumpsters and portable toilets on the beach, which it rakes nightly to decrease the amount of fish waste on shore. One way to help keep the beaches clean, he said, is for people to try to throw their salmon carcasses as far out into the mouth of the river as possible. It’s also helpful if people make sure to pick up after themselves.

Another way people can help keep the beaches in good shape is by walking only on designated paths rather than cutting through important ecological areas near the beach.

“The dunes are critical habitat, it’s really important that people respect them and stay off the dunes,” he said.

[What you need to know before you go: Kenai River dipnetting opens this week]

Ostrander said the fishery also affects the city’s police and fire departments, as well as parks and recreation. Each year Kenai hires about 20 additional employees to help manage the thousands of people who participate in the fishery by either standing in the surf with long-handled hoop nets or netting over the side of a boat.

He said it’s also important to remember there’s currently a burn ban in place due to high fire danger. The easiest way to keep up with the rules is to download the city’s dipnetting application and to pay attention to the signs posted at the beach access areas as well as respecting no trespassing and private property signs.

“It’s important they really pay attention to the signs, we put out an enormous amount of information for folks,” he said.

Nearly 70% of participants in the Kenai fishery are from Anchorage or Mat-Su, and just 7% are from the City of Kenai itself. Kenai is typically able to pay for the services it provides through fees, though last year Ostrander said Kenai took a loss due to an early closure and poor returns.

One knock on dipnetters is that they drive down from the city and don’t spend much money in the local economy, but Ostrander said he understands why people may want to make quick trips to Kenai just for the opportunity to catch salmon on the beaches.

“They’re just down here trying to enjoy the fishery and fill up their freezers,” he said.

Ostrander said he recommends people take a bit more time while they’re on the Kenai Peninsula to explore some of the historic and cultural landmarks.

“While you’re down here, come and enjoy some of the cool things we have in Kenai,” he said. “Make it a couple days.”

Michael Skinner is a U.S. Army veteran who grew up in Kenai and now leads tours through the city’s historic Old Town district. Skinner said there’s a lot more to his hometown than what folks from Anchorage or the Valley might know.

“I hear that a lot when I go up to Wasilla or Anchorage: ‘Oh, you’re from Kenai? I go there once a year and go dipnetting, I don’t see anything,’” Skinner said Wednesday from the city’s historic cabin park in Old Town, which sits on the high bluffs overlooking the north beach.

“We get more people from Switzerland.”

Skinner said he used to participate in the dipnet fishery — which has existed annually since 1996 — but gave it up due to crowded beaches and pushy fishermen at the mouth of the river, where on busy days hundreds of nets are in the water at the same time.

Skinner said he prefers giving tours of the historic cabins in Kenai, which have been preserved to show periods in the area’s early 20th century history and include a territorial schoolhouse, a trapper’s cabin and an old grocery store.

Kenai Chamber of Commerce & Visitor Center President and COO Johna Beech said there’s a lot more to Kenai than many people see when they make a beeline for the beach.

“I call us the seven-layer dip because we have the history of the Kenaitze Dena’ina, we’ve got Captain Cook, Russian Orthodox churches, homesteaders, commercial fishing, sport fishing — all of this makes the melting pot of Kenai,” she said.

The high bluffs overlooking the beach are the ancestral home of the Kenaitze people. In the late 1700s, Russian explorers and Capt. James Cook began to make forays into the area, which in the early 1900s began to be settled by trappers and homesteaders. In the 1960s and 1970s, an oil boom brought increased development and growth to the city, which is now home to about 7,000 people.

Beech said Kenai has impressive views of a trio of Ring of Fire volcanoes — Iliamna, Redoubt and Spurr — as well as a wealth of small shops, restaurants and parks most people might not be aware of.

“If you stop and think about it, we’ve got some really cool stuff here,” she said.

Although most visitors might only know of the national fast food chains that dot the Kenai Spur Highway, Beech said Kenai has more than 20 restaurants ranging from hole-in-the-wall coffee shops to upscale cuisine.

“The carrot cake at Veronica’s is to die for,” she said.

A day at the beach

On Wednesday, Anchorage dipnetter Ben Garman said opening-day fishing was steady. Standing next to a cooler full of bright silver sockeye salmon, Garman said he planned to clean the fish and hit the road that night.

Although dipnetters have a reputation of not spending much money while in town, Beech said the city does see an uptick in revenue from people who come to town for the dipnetting, which is open to Alaska residents only.

“Some people think it’s a curse, I think it’s a blessing,” she said. “I consider any dollar from outside of the 99611 a tourist dollar, so I love dipnetters.”

The dipnet fishery itself has come to be a tourist draw for Outside visitors who stop at places like Erik Hansen Memorial Park to watch the sometimes-frenzied fishery from above.

“Even though dipnetting is our way of life, to outsiders or international travelers it’s really frickin’ cool to see somebody standing in the ocean trying to catch fish with a 6-foot hoop,” she said.

Beech said anyone interested in exploring the city beyond its beaches should stop by the center, which is located just a couple blocks from the north beach access road.

“People are more than welcome to stop by and we’ll line them out,” she said.