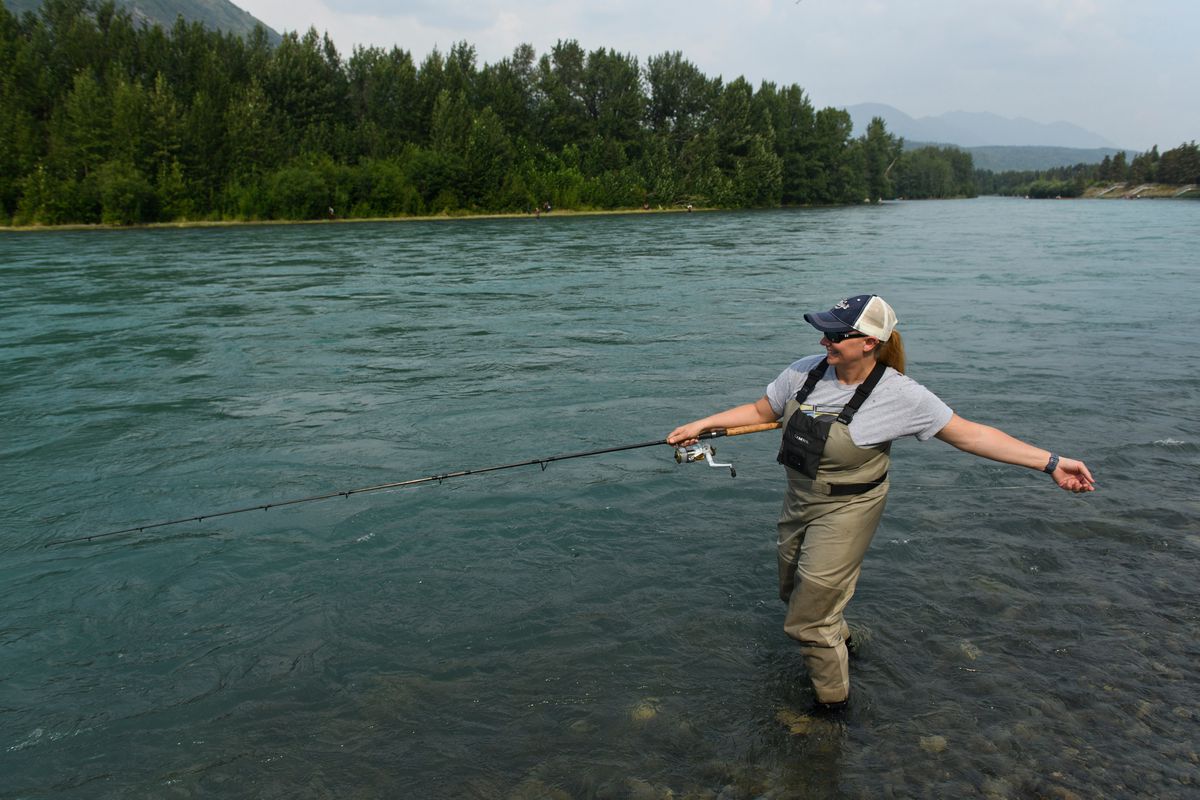 Teresa Nelson, of Chugiak, casts on the Kenai River near the Russian River confluence on July 18, 2019. (Marc Lester / ADN)

Teresa Nelson, of Chugiak, casts on the Kenai River near the Russian River confluence on July 18, 2019. (Marc Lester / ADN)

As the run approaches its apex, Kenai River late-run sockeye appear to be entering the river in decent numbers -- a departure from last year’s disappointing return.

Through July 17, 266,472 sockeye had been counted by the Alaska Department of Fish and Game’s in-river sonar station at river mile 19. That’s the highest count through that date since 2016 -- though still well short of the previous 10-year average of about 367,000 sockeye.

“This is the time when we should see a decent pulse come in,” area management biologist Colton Lipka said Wednesday.

Dipnetters Wednesday reported good catch numbers, indicating the run could be nearing its peak. According to the department, the peak of the Kenai sockeye run is typically July 16-25. Sport anglers have been having worse luck due mainly to high, muddy water that has the fish close to the banks.

“The best advice I could give is back up,” Lipka said, saying anglers “flipping” flies for reds are reporting their best catch rates close to shore.

Last year just 123,772 sockeye had been counted through July 17, and state biologists were forced to close the hugely popular personal use dipnet fishery at the mouth of the Kenai River early in order to ensure the escapement goal was reached.

The Kenai River dipnet fishery runs through July 31, with Alaska residents annually harvesting between 130,000 and 540,000 sockeye. Millions of sockeye salmon return to Upper Cook Inlet streams each year to spawn, with the largest returns seen in the Kenai River, which this year is managed for an in-river escapement goal of between 1 million and 1.3 million sockeye.

When exactly the bulk of the run will hit the river is anyone’s guess.

“We just passed the quarter point, so we still have a lot of the run to look at,” Lipka said.

Schools of sockeye can swarm the Kenai in massive numbers of more than 100,000 fish in a single day. When that happens, personal use fishermen and shore-based recreational anglers are able to catch their entire limits in a matter of an hour or two.

Currently sport anglers can harvest three sockeye per day on the Kenai.

A bit farther south on the smaller Kasilof River, which is also open for personal use and sportfishing, the numbers are even better. Through July 17, the Kasilof had already seen more than 193,000 sockeye return, the best since 2015 and higher than the previous 10 years’ average of 175,000 fish through that date. The Kasilof is managed for an in-river escapement of between 160,000 and 340,000 fish.

Although sockeye numbers are solid, king salmon returns on the Kenai continue to lag far below their historic averages and fishing is reportedly poor for kings due to both low numbers and high water, according to a midseason report provided by the department. As of July 16, 3,647 kings had been counted so far in the run, which peaks around July 27. That’s about 500 more than last year but still well below average.

“Fishing effort and catch rates have been below average as water conditions have been unfavorable to anglers,” reads an in-season summary by the department.

Fish and Game’s forecast models currently project the run will narrowly reach the lower end of its 13,500 to 27,000 optimal escapement goal for “large” king salmon, which are those at least 34 inches in length.

King salmon fishing has been restricted due to low numbers on the Kenai, where anglers may only use a single, unbaited hook. Keeping kings in the personal use fishery has also been prohibited. The sport harvest on the formerly world famous river (in 1985 the world-record 97-pound, 4-ounce king was caught there by Les Anderson) has been tiny this year, with the department estimating a harvest of about 233 kings in the first 15 days of July.

According to the Homer Chamber of Commerce, Jason Schuer of Wahpeton, North Dakota, was fishing with guide Daniel Donich aboard the Optimist when he landed his lunker. The derby includes a cash prize of $10,000 plus $0.50 for each ticket sold and runs through Sept. 15.

Anchorage-area anglers have more options than ever with the July 14 opening of Bird and Campbell creeks. The former is a popular and productive roadside fishing hole located less than 30 minutes south of Anchorage on the Seward Highway, while the latter is a small in-town coho fishery.

Fishing in Bird Creek is open on the lower part of the stream only, and king salmon may not be retained. Anglers typically cast flashy spinning lures into the muddy water, where hip boots or chest waders are strongly recommended.

Campbell Creek is open for coho fishing from Dimond Boulevard to Shelikof Street through Sept. 30.

On Ship Creek in downtown Anchorage, anglers may no longer retain king salmon, but coho salmon fishing is reportedly picking up, according to Fish and Game, which releases online fishing reports for each area of the state on its website at adfg.alaska.gov. Anglers are having success with both lures and bait.

Always check regulations before heading out.