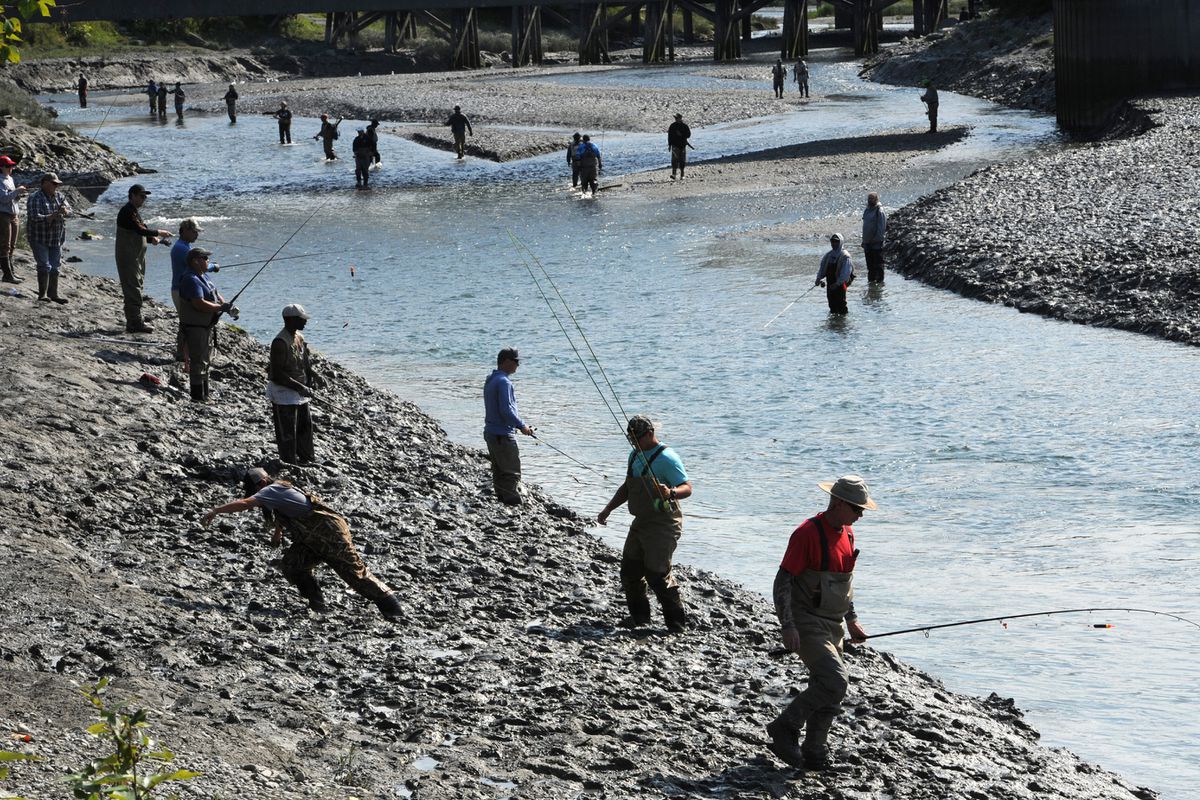 If there was ever a time to get a line wet in Southcentral Alaska, this might be the weekend.

From Seward to the Susitna, salmon streams and saltwater fisheries are peaking as the summer reaches its apex.

One of the most popular destinations this weekend will be the Kenai Peninsula, where personal use dipnetters continue to see big catches on the beaches of the Kenai River, which has seen nearly a quarter of a million sockeye swim upstream since Sunday.

Through Wednesday, more than 615,000 sockeye had been counted by the Alaska Department of Fish and Game sonar at river mile 19. That’s well ahead of last year, when 353,396 fish had been counted by July 24 and the department was forced to close the fishery early due to low numbers.

Based on historic numbers, the run is still only about half over, meaning personal use and sport anglers should continue to see good catches on the Kenai through the weekend.

The Kasilof River personal use fishery is also good, according to an online fishing report released by the department.

The lone dull spot on the Kenai River is the late-run chinook fishery, which remains relatively poor. Fish and Game said fishing has been fair for kings due to high water, but low abundance also plays a factor. As of Wednesday, 7,213 kings had been counted by Fish and Game sonar — better than last year but still far below historic averages for the late run, which is managed for an escapement goal of 13,500 to 27,000 fish.

The Fish Creek personal use salmon fishery will open at 6 a.m. Friday after biologists determined the run will reach its escapement goals.

The Alaska Department of Fish and Game issued an emergency order Thursday opening the fishery after projecting a total run of more than 35,000 sockeye salmon to the creek, which is located near Knik-Goose Bay Road in Mat-Su.

King salmon may not be retained in the fishery, which — like the Kenai and Kasilof fisheries — is only open to Alaska residents with a valid fishing license and personal use permit. The fishery will be open from 6 a.m. to 11 p.m. each day through Wednesday. Fishermen may harvest fish off the shore or in a boat between Fish and Game markers located on both sides of the terminus of the creek upstream to markers about a quarter mile upstream.

In its announcement, the department reminded people that access to Fish Creek is limited and can be difficult. The creek is typically accessed by foot from Mile 16 Knik Goose Bay Road, but there’s no boat launch there and the nearest public launch is across Knik Arm at Ship Creek in Anchorage. Additionally, most of the property along the creek is private, meaning dipnetters typically must walk in the muddy creek or request permission from private landowners to cross their land.

People may also access the fishery from the beach, but legal access is restricted to below the mean high tide line.

Coho and pink salmon fishing in Ship Creek has been excellent in recent days, with determined anglers walking away with full stringers of three fish each at the downtown fishery. The creek is closed to chinook fishing, but anglers casting spinners, drifting flies or using salmon roe have been reporting success.

“Coho salmon fishing continues to pick up and keeps getting better,” reads the department’s report on the fishery.

Anglers can keep any combination of three pinks or silvers per day and may not retain kings caught in Ship Creek.

Bird Creek south of Anchorage is also open to pink and coho fishing and has also been on the upswing, the department reported. There are also lots of pinks at both Bird and Ship creeks.

In Mat-Su, coho fishing is also picking up, with cohos, pinks and chums being picked up near the Little Susitna Public Use Facility. Fishing is also improving at the mouth of the Deshka River, according to Fish and Game, which also noted that sockeye fishing on the weekend-only Cottonwood Creek fishery is also likely to be good this weekend.

Anglers fishing for something other than salmon can also go after rainbow trout on the various Parks Highway streams, where the department reports fishing is excellent.

Coho salmon have begun to show up in Resurrection Bay, though that fishery remains slow with most fish still being picked up near Caines Head at the outside of the bay, the department reports. However, halibut fishing is good in Resurrection Bay and the waters of the North Gulf Coast.

In Homer, cohos have been reported in the Nick Dudiak Fishing Lagoon on the Homer Spit, and folks trolling from boats have been catching all five species of Pacific salmon.

“It’s possible to pick up all five species of salmon while trolling, particularly while fishing in outer Kachemak Bay near Point Pogibshi,” the department wrote.

Always remember to check fishing regulations before heading out on the water as rules vary from area to area and regulations are subject to change throughout the year. Regulations and fishing reports can be found on the department’s website at adfg.alaska.gov.