Early birds get the silvers at this roadside fishery near Anchorage 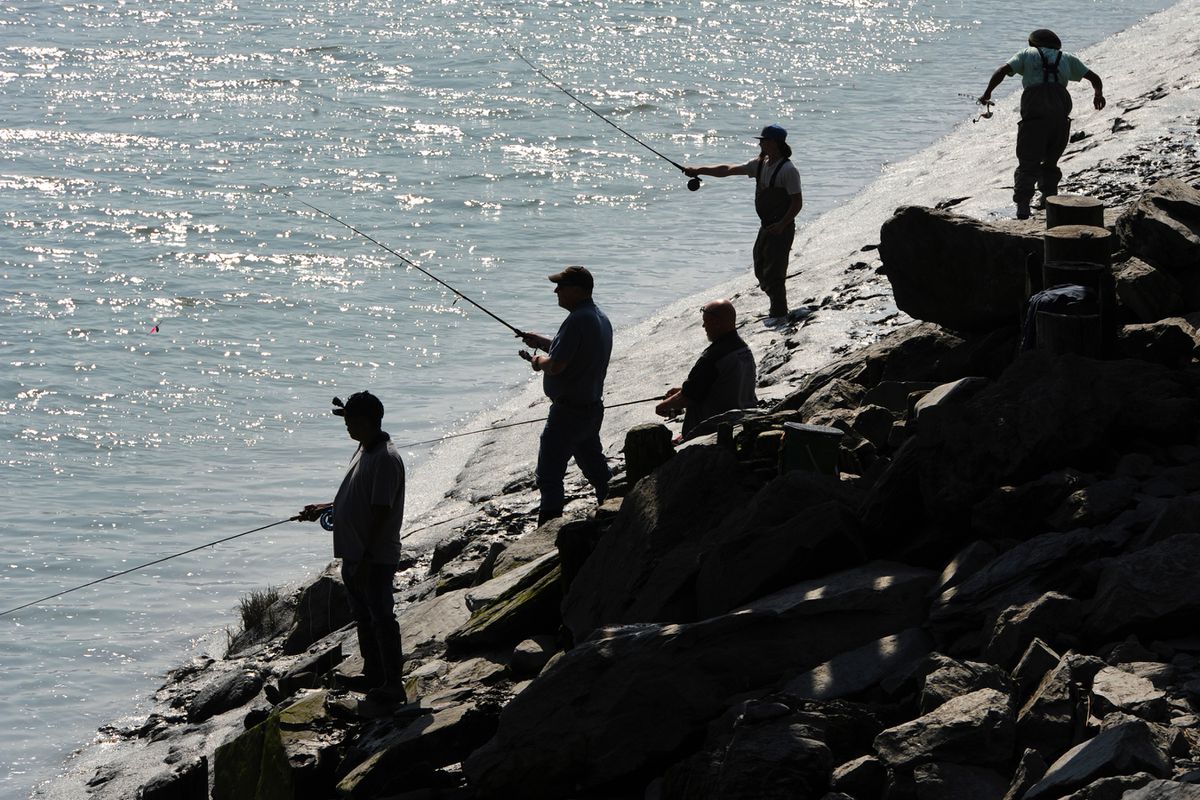 BIRD CREEK - Shiny spinners work. So do smelly salmon eggs. Even a flashy fly may get the job done. But of all the equipment one can use to fish silver salmon, the most important might be an alarm clock.

Long before most commuters hit the snooze button for the first time Wednesday, a half-dozen early birds stood in the dim morning half-light casting lures into the rising gray water of Bird Creek. Their boots and waders caked in gray mud, the anglers watched the surface for the telltale torpedo shape and silvery sides of a fresh coho.

As the light and tide rose in unison, the water began to erupt in splashes.

“Got one!” Anchorage angler Paul Sarafin shouted as he reeled in his first catch of the day.

It wouldn’t be his last.

Over the next hour or so, the tide flooded the creek with water and salmon. By the time high tide arrived, Sarafin and friend Loren Wilson had four fish on a stringer and the sun was starting to peek cautiously over the nearby mountains. Then a calm settled over the creek, its surface occasionally broken by the comically oversized dorsal hump of one of the thousands of pink salmon slowly dying in the muddy water.

Getting there early was crucial to their success, the men said.

“We caught all our fish in a window of about 30 minutes and after that they just aren’t aggressive,” Sarafin explained later.

The duo used No. 4 size Vibrax spinners to entice the notoriously finicky silvers to bite. Sarafin said he was mostly sight-casting to the silvers, which are typically larger and look darker in the water than the smaller “humpies” most anglers try to avoid.

“There’s so many pinks you’ve gotta look in the water for them,” said Sarafin, who managed to land his limit of three silvers (the names coho and silver are used interchangeably for the species, whose scientific name is Oncorhynchus kisutch) on Wednesday’s trip.

Wilson said the pinks or “humpies” (Oncorhynchus gorbuscha) usually have a whitish belly and tend to swim more laconically than the silvers, which enter the creek from the nearby ocean on each incoming tide with a bellyful of vigor.

“In that moment we were catching them, you could see a lot more coming in than even the last 45 minutes,” he said.

Wilson said he’s been fishing Bird Creek about twice a week since it opened in mid-July. In that time he’s brought home four silvers, he said, including the one he landed Wednesday. While colorful Vibrax brand spinners are the weapon of choice for most anglers, Wilson said soaking salmon roe as the water gets slack with the high tide can also produce results.

“I’ve been down here a lot and I’ve done a little of everything -- casting, bait, flipping -- and I’ve seen success with all of them,” he said.

Both men said the incoming and outgoing high tides tend to produce the best results, as does fishing when the light is low. Sarafin said silvers’ aggressiveness wanes in slack water and sunlight, with fish that would minutes earlier hit a spinner turning up their noses at even the most skillful presentation.

Though getting to the creek early in the morning is helpful, fish can be caught in Bird Creek any time of day and with numerous techniques.

“Nothing’s sure in love, war and fishing,” Sarafin joked.

Just a 20-minute drive south of Anchorage, the late-summer fishery is hugely popular with both before- and after-work anglers.

“I like getting down here before the family gets up,” Wilson said.

The sound of rushing cars (and an occasional Alaska Railroad train) nearby make it impossible to entirely forget how close you are to civilization at Bird Creek -- but it’s not hard to partially forget, with eagles soaring overhead and the very real chance a brown bear could emerge from the thick woods. Hip boots or chest waders are a must in the slimy, silty mud of the creek, though curious viewers can watch the action below from viewing platforms or the pedestrian bridge.

As he headed for the parking lot early Wednesday, Wilson said the best thing about Bird Creek is its proximity to Anchorage, which allows him to get a couple hours of world-class salmon fishing in before work.

“I like getting out, I just love being on the water,” he said. "I love catching stuff, but even if I don’t it’s still fun.”